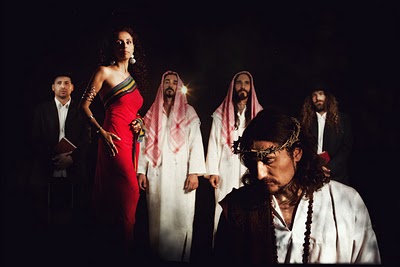 This is real strife, you poseurs. It’s not fabricated, not faked. Try as you like to get pity from your daily ills…it’s child’s play compared to what Orphaned Land has to endure on a regular basis. Their homeland of Israel is under the constant threat of war and terrorism, the result of decade’s worth of religious mongering between the Jews and Palestinians. There’s no end in sight; peace just isn’t going to happen – just watch the news or read the paper.

Functioning in a region so unstable should wreak havoc on the creative process that is so vital for any band. Most thrive on routine or stability, yet for Orphaned Land, turmoil and tumult serves as inspiration. Their breakthrough effort Mabool (2004) shattered boundaries and introduced the band on a worldwide scale via elaborate instrumentation that culled directly from the fertile soil of Israel. Blending the storied sounds of classic melodic metal and Middle Eastern instrumentation, Orphaned Land almost immediately established itself as one of the most unique bands in all of the underground. It was nothing like anyone had heard before, thus sparking a period of intrigue going into their latest, The Never-Ending Way of ORWarriOR.

Based on the concept of “The Warrior of Light,” Orphaned Land has made it their personal mission with The Never-Ending Way or ORWarriOR to use music to bridge the divide that constantly separates its homeland. There’s no agenda outside of finding that common ground of peace and understanding, and as singer Kobi Farhi would go onto tell Blistering, they’re already making headway. The soft-spoken vocalist [who this scribe had the pleasure of meeting back in 2005] phoned from his home in Tel-Aviv to discuss the new album and more importantly, how Orphaned Land is more than just a band – it’s a movement.

Blistering.com: Before we go into anything, let’s talk about Mabool. It was the album that put you on the map, but at the time, could you have predicted the impact it would have on your career?

Kobi Farhi: With Mabool, we reached new heights with our ideas and quality. We really felt like we were limitless in our creativity back then. It was a great day when we heard the reaction from the media and the fans. Before Mabool, we never played abroad and after it, we played like, 25 other countries. It was a big change in terms of visibility. People got to know us better and we were fresh…we aren’t like American bands or European bands, so hearing this Middle Eastern metal for fans back then it was new, just like it is for fans getting to know us now. We got bigger, but we’re still not that big [laughs].

Blistering.com: You made a trip over to North America for ProgPower in 2005. For a band coming from the Middle East, what was it like? A culture shock?

Farhi: It was my first time in the USA, so I was very excited. It was a great experience. ProgPower is well-known for being a quality metal festival. We aren’t the kind of the band that sticks itself backstage and acts like rock stars. We always go out, always mingle with the fans, and drink some beers. I got to know a lot of them and the feeling was, they were devoted fans – buying our merch and being so generous. American fans are some of the most devoted we’ve come across.

Blistering.com: Aside from your geographical locale, what do you think draws people to Orphaned Land?

Farhi: There’s a lot going on musically, but aside from that, we’re a band that has a lot of concepts. We play a very complex style of music along with having many concepts. Where we come from, all of these people are enemies…it’s so different for a metal band to come from an area like this. You can see all of the photos where we are dressed up as religious figures and we use many exotic instruments as well. We don’t sound like anyone else.

Blistering.com: As for The Neverending Way of ORWarriOR, just give me some type of scope of all the work that went into it.

Farhi: First off, it’s a really long album and I remember asking Century Media, what’s the maximum length for an album. We made an album that’s 78 minutes and 22 seconds and I believe the max is 78 minutes and 30 seconds [laughs]. There are only eight seconds between us and the end. You get a lot of albums that are 30 or 40 minutes, but not with us – this is basically a double album and just speaking to the diversity and all of the layers…all of the guitar riffs in our music in each and every one of our songs, there’s just a huge amount of information.