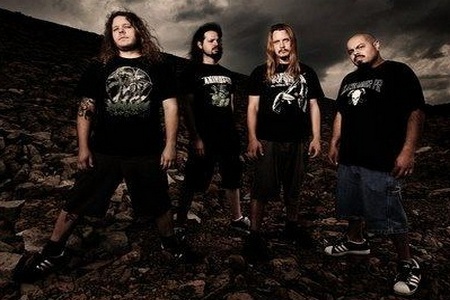 Dead Rhetoric: How do you feel that the Albany scene has changed over the years?

Keyser: It’s been downhill for a while, it’s very rare to see an off-the-wall local show. Even national bands come through here and it’s sad to see the lax turn out. There’s still die-hards that are great that are doing everything that they used to do. But we’ve lost a lot of great clubs (Valentines, Hudson Duster). We’ve got Bogie’s and Trickshots, which are both great venues, but either people don’t know about them or don’t know how to find out about shows there. Last year I went to Mayhem Festival at SPAC because of Battlecross and Job For A Cowboy. Seeing 10,000 people watching Job For a Cowboy and Amon Amarth got me thinking, “where the fuck are these people coming from?” Is there no interest in going to find and experience music that isn’t just mass-marketed and spoon-fed? It’s a bit disappointing up here now, but it had its heyday where it was one of the hardest scenes ever.

Dead Rhetoric: Talking earlier about the fast vocal lines, “Thrall Fulcrum Apex” has some really fast moments. Is there any preparation to pulling this off?

Keyser: Very little preparation, other than learning the words. I think we wrote that song the day before we recorded it. It’s one of my favorite songs. When I listen to my own music in the car, I skip back to that one quite a bit. I just love it; it’s an unrelenting 1:10. We have already played it live in Asia and Australia, and it’s just a face-ripper. It’s tough, and I feel like I’m going to have a heart attack at the time when it ends, but there’s not too much preparation.

Dead Rhetoric: Did you do much of the lyric writing for Omnipresent?

Keyser: Yes, I wrote all of the songs except “All Things Dead,” which Paul wrote. It was cool that they gave me the keys to the car and let me do what I want.

Dead Rhetoric: Was this a big change from what you did with Skinless; heading in a more space-y direction?

Keyser: It was a little different, but the Skinless cd came out almost 10 years ago now. It was more along the lines of what I did with Mucopus. I’m not turned off by the themes they’ve always had, I think it’s cool that they are one of the pioneers of it. It was fun to write, and I’m proud of everything I did with it lyric-wise. There is an over-arching theme to the whole album and it’s something the listener can interpret in any way they want.

Dead Rhetoric: How do you think that Omnipresent compares to the rest of the Origin discography?

Keyser: It’s definitely different but there’s nothing wrong with that. Paul has always said that he never wants to write the same album twice. We took some liberties with the Origin sound but at the end of the day the response has been overwhelmingly good.

The first song we put out was the song “Manifest Desolate.” It was our European label’s [Agonia Records] choice and even we kind of reacted a little bit to it like, “why would they do that, it’s not like a heavy-hitter, it’s more of a cool down song” and it makes more sense within the scheme of the album rather than separately. Some people were scared; Origin fans were asking, “Is this what the whole album is going to sound like?” We got a little bit of hate for it because it was taken out of context, but on the flipside, in Europe, people loved it! It was the song the European label picked and the European people were super into it. When we put out “All Things Dead” and “The Absurdity of What I Am” some people had a breath of relief so we have had great response since then.

Like it or hate it; I hope people like it. We are at the luxury that we are not that big a band where we have a label telling us what to play and wear eyeliner. We can write what we feel and travel as well.

Dead Rhetoric: You are going to be playing the Summer Slaughter; are there any bands you are looking forward to playing with?

Keyser: The line-up is obviously fantastic, probably one of the most clearly front-to-back awesome line-ups they’ve ever had. We are just kind of excited that we know these bands already and have toured with them before. It’s going to be an easy, no-bullshit tour, which translates to a more relaxed, having a good time on the road, which makes better performances. The audience is happy because they get a better show from a band rather than someone who is just doing the day’s work and bailing out. Summer Slaughter is a rough day for bands. You have to be there 12-13 hours a day and then drive 10 hours to do it all over again. It’s better when you are in a good mood for it. Dying Fetus are one of my favorite bands to tour with, the Goatwhore dudes are all cool, we’ve toured with Decrepit Birth and The Faceless before, and the Morbid Angel guys are nice. It’s going to be awesome all around.

Dead Rhetoric: Are there any songs off Omnipresent that you are looking forward to throwing out there?

Keyser: I can’t wait to surprise people with “Thrall Fulcrum Apex.” Maybe go from something groovier and into something where people just don’t even know how to react to it [“Thrall Fulcrum Apex”]. “Unattainable Zero” is probably my favorite song on the album. It’s the most “radio hit” off the whole cd and I think that one would be a good one to bring out too.

Dead Rhetoric: You’ve already announced you are doing a headline tour after Summer Slaughter. Are you guys going to get any rest for the remainder of the year?

Keyser: It’s not looking like it. We have Summer Slaughter and then the headlining tour for another month after that without going home first. Then we are home for September and then I’ve heard we might be going to Central America in September. We have another tour in October that hasn’t been announced yet that’s going to be pretty big and pretty awesome. Then in November we go right to Europe with Aborted and Exhumed, which is going to be another awesome tour. Then we wrap it up in January with 70,000 Tons of Metal, which is the boat cruise. We are pretty excited for it but then maybe we can breathe for a minute after that.