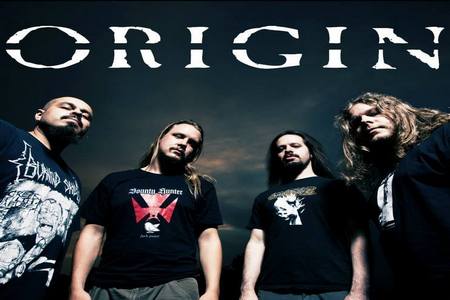 Origin have been one of the long-standing leaders of the tech death scene. From their early beginnings with Relapse to their current home with Nuclear Blast/Agonia Records, many have looked to them to set the bar for fast, frenetic death metal that is oozing with technical flavor. They also managed to get on the outer space train before it was “cool and hip,” giving them some additional style points.

With the release of Omnipresent, the band is again up to their old tricks. Many bands can attempt to play faster or more brutal than them, but nothing quite hits the mark like a new Origin album. After some vocal hiccups before Entity, the band has again found a solid and stable vocalist in the form of Jason Keyser. Despite being in the band since 2011, Omnipresent marks the first time that he has been behind the mic in the recording studio for the band. Naturally, this seemed a perfect time for DR to see how it went, along with discussing the band’s unrelenting touring plans and the old Albany, NY scene.

Dead Rhetoric: You’ve been with Origin for a few years now but this is your first recording session with them. How did it go overall?

Jason Keyser: It was great, it was good to actually have something recorded. When we went through the recording process I kept getting warned of how Origin’s recordings are always notoriously difficult and grueling and how everyone hates each other by the end of it. But surprisingly, by the end, it seemed like everyone was changing their tune. They were saying that this was the smoothest recording process that Origin has ever had.

Dead Rhetoric: Coming from Skinless, was it intimidating at all to transition into Origin?

Keyser: Not necessarily, in terms of being a member. I was never treated like a fill-in guy or a new guy. It was definitely a distinct change from the style I was used to. In the beginning, I used to goof that there was one part in one Skinless song that I used to dread live that had a really fast vocal part that would leave me breathless. It was only like three or four lines, but now with Origin that was like every part of every song. I had to step it up a bit and give my lungs a bit of a workout but went pretty well. Now it’s easy!

Dead Rhetoric: You came in right after Entity came out, right?

Keyser: Yeah, it was a weird situation. After James Lee left, they had another guy that ended up being a replacement guy [Mica Meneke] that toured with them. I don’t know the details, but he skipped out right before Entity was about to be recorded. I almost was on Entity. Once Mica left, John [Longstreth] contacted me through email but at the time I was living in India for school. He asked me to join and I said, “I would love to but I’m out here for school for the next 8 months, but I’d love to join when I get back.” John said they didn’t mind waiting, but they needed to have an album out. So they recorded the album and when I got back, I took over for the Entity touring cycle.

Dead Rhetoric: With the number of vocalists Origin has had, what do you feel you bring to the band?

Keyser: James Lee set the standard for what people think of when they think of Origin. I don’t try to be him; I don’t think anyone expects or wants that. I think that we have shifted our focus to a much more live-oriented scenario. Origin is notorious for having fans that have come to shows specifically just to watch, like seeing Paul [Ryan] play guitar. So we had a certain type of fan that would cross arms, staring intently, nodding along. Not listening to the music so much as just trying to intently pick apart what they wanted. Since I joined, it’s been my mission to change that dynamic and get more participation. Not in that “move this fucking pit,” douchebag kind of way but I hope to inspire them and bring more enjoyment to it. It’s been going good and shows have been more intense. For Omnipresent, Paul had that in mind and he might have written a bit more in that direction.

Dead Rhetoric: Speaking of getting the crowd involved, I’m from the Capitol Region [NY] and I grew up with Skinless. When you joined Skinless, is that something that you got involved with as well?

Keyser: I grew up with Skinless myself, so that was a huge influence on me as well. So I think that’s just what came natural. The Albany area used to be a hot bed for great shows all the time. Every show was just intense and dangerous, and you never knew if you were going to be come out with all your teeth. Nowadays, not so much, but that’s what I was used to. I was used to the amalgamation of hardcore and death metal, because that’s what we did up here. So it was just common practice to have an off-the-wall show where people jumped on stage and if you were a frontman, it was just as dangerous to be on the stage as it was to be in the pit. It’s more environmental influences from endless tours with Skinless, Mucopus, and Origin.

When I first started going out with Skinless and would go to places to where people didn’t participate fully, it would throw me for a bit. I didn’t understand why you would go to a show if you didn’t want to feel it in some way. So now I try to make them want to do it.