Opeth – The Burden is Theirs 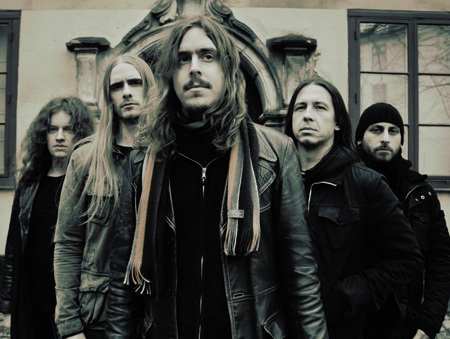 (This content originally appeared on Blistering.com in September of 2008)

We’re a good four months removed from Opeth’s newest effort Watershed and if early indications are to be believed, the band has another career milestone on its hands. Brooding, with some new twists and turns around every corner (see: new drummer Martin Axenrot’s blasting on “The Lotus Eaters” or the unsettling de-tuning at the end of “Burden”), Opeth have added new dimensions to their sound at a stage when most bands are content and ready to phone it in.

As singer/guitarist/bandleader Michael Akerfeldt will tell you, it always wasn’t this easy. The departure of longtime guitarist Peter Lindgren in early 2007 was a surprise and the dismissal of drummer Martin Lopez in 2006 could have thrown a monster wrench into Akerfeldt’s plans, but the band has maintained a stream of cohesion that few in metal can match. Now with Axenrot, longtime bassist Martin Mendez, keyboardist Per Wiberg, and new guitarist Martin Akesson (ex Arch Enemy), Opeth’s lineup is stabilized and ready to tour the world over.

Calling while on the road, the affable Akerfeldt was subjected to Blistering’s queries about everything but the new album (c’mon – there’s a shitload of press on it already), so we decided to switch it up and hit Mr. Akerfeldt from some new angles. Here’s how it went down…

Blistering.com: The last album that you had major lineup turnover like this was for [1998’s] My Arms, Your Hearse. What was the situation like in the band around the time?

Michael Akerfeldt: It was not a good recording. It was turmoil and chaos that just was there all the way through, to be honest. We just got Lopez in the band and was a bit green and have never really recorded before and I the first time I heard the material, I thought it was shit. I like it now…the band wasn’t in such a great shape. Peter and I were still working together at that point, which was cool. On that album, I started writing more material on my own, so that album he didn’t contribute as much. I had more weight on my shoulders and especially with Lopez coming in, making him feel comfortable…I had to pep-talk him all the time during the recording and he hated (producer) Fredrick (Nordstrom) as well. They were not getting along at all.

The recording…the sound is special – bleak and cold, so it’s not a good sounding record. And we were very sloppy with everything and I remember recording the drums – some of the punch-ins were just horrible. We forgot to the tune-up the snares. In the same song, you can hear it change pitch.

Blistering.com: That was during the time when the band wasn’t rehearsing much, so how did you pull that off?

Blistering.com: So the whole album is one big cut-and-paste job?

Akerfeldt: Yeah. Most of those albums with Lopez were pasted together because we didn’t rehearse much.

Blistering.com: That was the album where you had the idea of doing one long song. Didn’t Edge of Sanity’s Crimson derail that idea for you?

Akerfeldt: No, (Edge of Sanity mainman Dan) Swano is the king of doing a song like that. We did think about doing an album like the Crimson record. It doesn’t matter, I guess we were getting carried away with the whole long-song thing. I guess the reaction was the songs came out shorter. Those songs are shorter than everything before it at that point.

Blistering.com: Describe your frustration around the distribution problems with Still Life.

Akerfeldt: We just signed with Peaceville Records and we were happy. It didn’t reflect on stuff like that because we thought there were no such [problems] on a big label. I’ve been buying their records for such a long time and I thought they were the closest thing to a major and they were also closely linked with Music for Nations at that time. I didn’t think about the American market at the time and we didn’t do any work for that album either. It wasn’t only America that our career didn’t take off, it was everywhere. I was happy with the band and happy with the label at the time, so I didn’t think about those type of things at all.

Blistering.com: How has Per’s role in the band evolved?

Akerfeldt: He’s no more of an important guy than anyone else, but the last couple of years, he’s getting increasingly more important and he’s also contributing to the songwriting. He’s like…he’s very musical and is easy to work with. He’s a big help in many events during the songwriting process. He’s very important and he can play pretty much everything and as far as I’m concerned, all the albums in metal with a keyboard player suck, but he’s great.

Blistering.com: How did you fit him in with some of the older songs?

Akerfeldt: I thought it was hard at the beginning, but it wasn’t really because we always recorded more than we play live. With Per on board, we can make the songs closer than the original version which I didn’t realize when he joined the band. We can have him play on the old stuff and now it feels it like whenever he can’t be there for rehearsal, it just sounds empty.

Blistering.com: You’ve mentioned before you don’t particularly enjoy being away from your family while on tours like this. Is it getting even harder?

Akerfeldt: Yeah, I hate going away from home. I suffer everyday on tour, to be honest. But I love playing shows – the shows are always great and I feel like a fucking million bucks. I hate everything else. It doesn’t matter that I’m out here working in a way. I love doing this – I love being in a band, I love recording albums. Even though I am providing for my family, I can’t shake the feeling of not doing the right thing because I’m not there for them; it’s as simple as that.

Blistering.com: Do you ever imagine this slowing down? It’s not like the band’s popularity is dwindling.

Many parts of being in a touring band, you can’t help but find yourself where you’re like, “wow, I’m really not enjoying this, but I have to do this because it’s best for the band.” I’m not sure where we’re going to end, but luckily, my wife is very understanding and supportive. She’s pushing me and taking care of things back home, which makes it easier for me to focus. We’re touring for a year and half, then we come home for a year and half and I’m not doing anything else but being with my family, which for me, is the pot of gold [laughs].

Blistering.com: Is there any temptation to do these larger amphitheater tours like you have with Gigantour and Sounds of the Underground?

Akerfeldt: We can’t fill arenas by ourselves. We’re interested in the support shows and it has to be a band we like and that pulls a lot of people because that’s the only reason to do a support show is to reach out to new people and maybe meet some of our heroes. If we got an offer from Metallica, we couldn’t say no to that. If we got an offer from Tool, we wouldn’t say no either. There’s not a lot of bands that we would feel like we would want to support. We might as well do our own tours and these are pretty decent-sized clubs. Average attendance is a 1,000-1,500 a night. It’s still a good show. I enjoy it more than supporting, to be honest.

Blistering.com: Any update on your collaboration with Steven Wilson (Porcupine Tree) and Mike Portnoy (Dream Theater)?

Akerfeldt: It’s not even in the talking phase. It’s nothing. I’m not sitting around waiting for it. I’ll be there if they want to do it, but I’m not going to instigate to actually to do something. If it happens fine, if it doesn’t, I’m not going to cry.