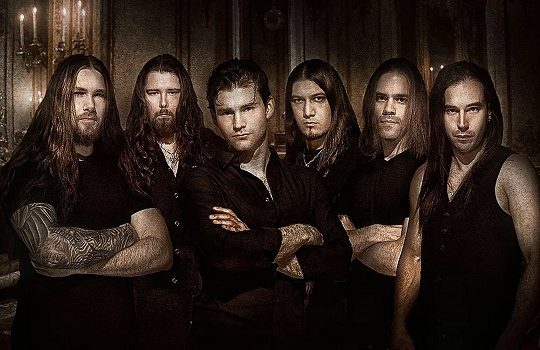 An album that took over a year to complete, Operus’s Cenotaph debut full-length does not approach epic metal lightly. If we were to tap a band to score a big-budget, summer blockbuster, then look no further than the Toronto-based outfit, who were formed in 2005 by guitarist Oscar Rangel. Their songs — while heavily orchestrated and multi-layered — don’t eschew the basic notion that somewhere amidst the bombast, there has to be a song, to which there are plenty. Rangel’s road to getting Operus off the ground has been long and sometimes tedious while he looked for the right members and perhaps most importantly, searched high and low for the perfect vocalist after original singer Will Patterson left the band last year. (Rangel also did a stint in Annihilator, for what it’s worth.) As Rangel clues us in below, Operus turned to the Toronto theater scene to land the dramatic vocal stylings of David Michael Moore, wrapped up the recording of Cenotaph, then off they went, including some dates with Italian power metal giants Rhapsody earlier this year…

Dead Rhetoric: Before we get into the history of the band, how did the shows with Rhapsody go?

Oscar Rangel: Amazing. It was better than we could ever expect. The whole band loves the country, love the people there. The Rhapsody crew and everybody treated us really well. So, we were very pleased with the whole experience.

Dead Rhetoric: How did you end up with this kind of opportunity?

Rangel: Because I have some representation down in Mexico and I’ve been working for a couple of years with a manager. As soon as I started playing with Operus, we kind of always had that plan of doing something big in Mexico, and still do. So, every little opportunity we saw, we apply for them, contact the promoter, the management of the other bands. Then things fell into place and we were able to do this.

Dead Rhetoric: You’ve had the band going since the mid-2000s and you finally released Cenotaph. Can you describe the weight taken off your shoulders after its release?

Rangel: The band started really after 2013. That’s because on the bio you probably saw that I started composing for this in 2005, which is correct. But, this is a component of the writing I started doing in Mexico. Basically, every single piece of knowledge I learned in school in composition, I would go home and try to make a metal sound with it and try to combine it. The songs you hear on Cenotaph are from that time. That’s why I try to stress that the album doesn’t have all new ideas. So, I moved from Mexico to Toronto in 2009 and I started actively looking for people, but it’s always hard moving to a new country, with a new language and culture. It took me a while to get to know the local scene here, but it was worth it. It was definitely worth it. It took such a long time to find the right musicians because I’m into the idea of having a band that is a band, not just one person, which nowadays, seems to be a very big concept in the metal industry. Usually, you have a band where you have one person who makes all the decisions.

Dead Rhetoric: What was the turning point for the band? Getting David as the vocalist?

Rangel: No, I would actually say the turning point was when I got in touch with Wojtek Sokolowski, the bassist. That was around the time I was also in touch with Robin Howe, the cello player and that’s because Wojtek had some amazing deal with getting things done. You know how a lot of times bands don’t progress because people say “I’m going to do this” and it never happens. I always do the outreach and I’m kind of experienced with public relations and trying to promote because I’ve self-promoted a bunch of shows, too. In the band context, Wojtek brought in a whole new kind of level of management within the band that made everybody see very clear that how the situation is and how to do this project. With that, we started finding the right musicians.

Dead Rhetoric: As for David, it’s such a unique thing. His background is in theater and then when you listen to Cenotaph, he’s such a great fit. How did you manage to work him into the band?

Rangel: It all happened while we were actually tracking the album. We recorded the album somewhere around October, which was exactly the year before we released it. At the time, we were having trouble with our old singer. We had differences, so we just had to let him go. Then, afterward, we had trouble finding a good voice because we wanted and needed that somebody who was a professional singer. We started looking first in Toronto, in the Toronto area and we couldn’t find anybody as well. Then, we decided to expand our reach to Ottawa and Montreal and every big city around us. We didn’t have much luck. We had many auditions, but it was nothing that was exciting to us, so we kept on looking, then we expanded our reach to North America and when that didn’t work, I started going off script and started looking into the musical theater world as opposed to the metal scene. I got in touch with Dave. I showed him the band and talked to him about the plans on the horizons and I showed him the new album we recorded; it was fully recorded except for the vocals. And, he got excited and got onboard.

Dead Rhetoric: Was he at all into metal before joining?

Rangel: He used to play rugby. He told me from the very beginning that he used to listen to metal to get pumped up before going to a rugby gig. It’s a great way to do it. Yeah, he did have some experience listening to metal, but not the type of music we make. His voice is perfect for us because we always wanted to have something theatrical. We debated whether to call it theatrical metal instead of whatever we’re calling it now. It all gelled together. He’s an amazing singer and brings out a lot of expression into the music. The next album, we’ll have some heavier vocals as well from him. He’s also evolving.

Dead Rhetoric: We talked about the theatrical metal thing and you clearly fit under the rather large symphonic metal umbrella. The album itself has a lot of parts and orchestration, so, at what point do you draw the line in order to not go too far?

Rangel: My mind is that if we can’t play a song without orchestration that sounds good, that’s where the line should be drawn, to me, in my opinion. So, for example, a lot of these songs were written a while ago, but for the next album, even though we’re using some material from back then, we’re putting more emphasis into heavier guitars. It’s going to be like a melody, a melodic part, it’s fully a melodic part and we can develop other ideas within the melody. But yeah, we basically, the idea is that we want to be able to play the songs without any backing tracks and get the point across. The orchestration will be there to make it massive.

Dead Rhetoric: A bit of a general question here: What are your long-range goals for the band? Do you hope to turn Operus into a full-time thing?

Rangel: We do want to tour, we want to make Operus our number one priority for a living. We know how hard it is for other metal musicians; they have to work on other things. With that, we are lucky, or I am lucky, to have a band with professionals, music professionals outside of metal, either teaching or playing in an orchestra or doing session work. We’re all very active. The main goal would be to have a fully-touring band, capable of touring months at the time. We have a lot of other, sort of, non-traditional metal ideas, such as I explained before, the theater metal thing, we have a couple of things on the slow-burn that are developing that we can work on whenever we don’t have a massive task like writing an album or preparing for a tour.

Dead Rhetoric: You were in Annihilator for a little bit. What was it like working with Jeff (Waters)?

Rangel: It was super-fun. I love playing with them. My time with them was all just good times. We had a lot of experiences all around the world. They’re a pretty well-known band. At the same time, I think I did get a little bit spoiled with touring. That was my first big international touring experience, so I’m basically trying those experiences with my own project now. In a way, that gave me a perspective that I wouldn’t have without Annihilator. Now, I can tell better if it’s an opportunity that’s good for us or it’s something we can afford to pass on.