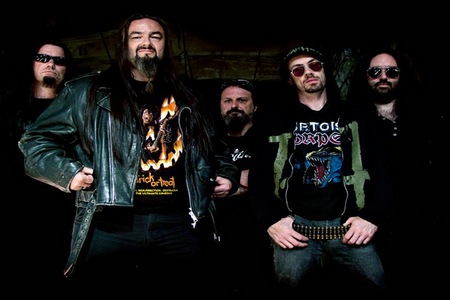 Dead Rhetoric: How do you view the current thrash scene? Do you think the development between veteran and new acts has made things healthier and more sustainable than in the first wave of the 1980’s?

Rockett: I guess so. The good thing is, why thrash has progressed for the last 6-7 years is the old school bands, the majority of them are still here. The ones underneath: Testament, Kreator, ourselves, Overkill – produced some of the best music of our career now. When the younger bands come along and drag in the new fans to their generation, these kids want to find out where these influences come from and all of a sudden they listen to the old school bands and love it.

Dead Rhetoric: Who are some of your personal heroes in the music world: be it particular guitarists that maybe shaped your style or songwriting influences?

Rockett: I’m not really a hero type guy, but the one guitarist that really when I started to improve my playing…when I was into punk Steve Jones was the guy because of the guitar tone. When I wanted to play the more metal side, it may not be the first guy you think of especially when there is the likes of Tony Iommi, K.K. Downing and guys like that; Gary Moore was the guy for me that made me want to play better guitar. He had so much feeling in his playing and he was so aggressive, he would just kill on his guitar. Even when he was playing melodic in general, it would be incredible to watch the guy.

Williams: There was so much feel in his playing, it wasn’t just a technical exercise. The solos were there as an extension of the pieces of music.

Dead Rhetoric: Is that something you are conscious of when it comes to your own personal songwriting, the balance between the emotion and technique, because sometimes thrash is all about the adrenaline rush and aggression?

Rockett: Technique comes into it a lot in rhythm playing because I like to play stuff that’s really hard to play. At the same time it has to have the emotion and feel. Even when I’m recording live I like to get into it, make the stupid faces and such. That was one of the things I probably got from Gary Moore.

Williams: It’s all about the faces! (laughs) This is what people don’t realize, you have to get your face attached to your fingers.

Rockett: Gary Moore used to pull some very hideous faces, and so do I; it comes out that way. You see some guys and they are playing away with no emotion in their face, it shows in their guitar playing.

Dead Rhetoric: What are the differences in your eyes between the recording studio and the live show for Onslaught?

Rockett: I love the studio work because of what comes out in the end, that’s the only reason. I find it very stressful to make records, and I just wait for the final mix. Live … all the tension comes out and you release everything, it’s an adrenaline rush.

Williams: There’s an energy from the audience that you feed off of, they just go crazy and then the songs may be a little faster or a little more aggressive.

Rockett: It’s kind of tough when you are in the studio to get that kind of adrenaline going, you know? The only way I find that you can do it is to turn everything up as loud as you can. You psyche each other up, we would love to get a crowd in there to see us record. Live playing is what we are all about; making a record is a means to an end for the live show.

Dead Rhetoric: What are the biggest concerns you have about the world we live in today?

Rockett: Do I want to get political? We can all see what is going on at the moment, a major concern with… I really shouldn’t say what should be done about it. What’s going on in the Middle East is seriously putting the world at risk. I think it’s absolutely insane.

Williams: It’s a dark and menacing world, but everyone is aware of what is going on. There may be terrible things happening, but now everything is so well filmed and it makes things more sinister because everyone knows about it.

Dead Rhetoric: If people approach you for advice regarding the music business, what direction do you steer them in?

Williams: If your kid is interested in music, buy them an acoustic guitar, with ridiculously high action, and if they are really, really determined, they’ll learn how to play it, and if not, they’ll get to be a doctor (laughs).

Rockett: It’s got to be tough to start a band these days. I know so many good musicians and it is virtually impossible to get themselves off the ground. They are relying on Facebook, which is a decent medium and helps, but it’s not everything. If you have a new band, who is going to search you? It’s so tough. The only advice I give is write three songs and take as long as you can to perfect those three songs. If it means taking 2 years to perfect those songs to the best of your ability and make them sound fantastic, there is so much competition.

Williams: That first impression matters so much more. Think back in the early days, how many bands didn’t break until their third album? Nowadays, you would have been dropped if you don’t break on the first album. There is no long-term commitment to these newer bands.

Rockett: And then you have to get lucky, and how you get lucky these days, I don’t really know. Even bands are getting screwed from downloading, as well as the promoters. A lot of times these newer bands have to sell hundreds of tickets and then you get an opening slot for 20-25 minutes if you are lucky. Whereas when we started, people were falling all over themselves to book these bands. Once word got around in the underground with a few fanzines, tape trading to build up, it was a maelstrom of interest and people wanting to do this for you.