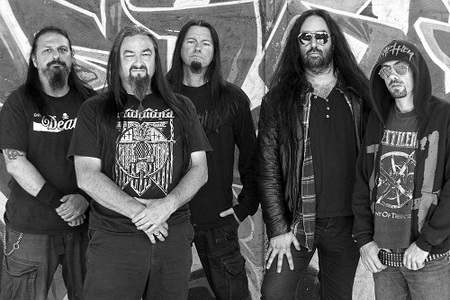 Touring is the backbone to spreading heavy metal’s collective energy to the masses. There’s something special in regards to hearing a record for the first time at home or with friends, and then going to that concert and pushing out your favorite tracks at pique volumes. Veteran thrash band Onslaught from the UK know a thing or two regarding both aspects – putting their domestic scene on the map in the early to mid-1980’s through albums like Power from Hell and The Force, and then gaining a second chance at acclaim since reforming in 2004.

VI is the latest studio album, and another barnburner in terms of textbook thrash speed, slam, and precision. Finally getting the chance to tour North America again this fall with Danish thrash veterans Artillery, old-timers and hopefully newcomers will get a chance to see these acts proving the long lasting impact of the genre. Taking in the second date of their two month long tour, I got the chance to sit down at the Middle East Restaurant hours before the show with guitarist Nige Rockett and bassist Jeff Williams – very friendly and outgoing musicians who are adapting as best as possible to the temporary touring vocalist situation thrown at them due to main vocalist Sy Keeler’s son issues in terms of health and impending surgeries.

Enjoy the conversation, and if the band is playing anywhere near your area, be sure to check them out. Because thrash is not just a Bay Area phenomenon, it’s worldwide

Dead Rhetoric: Let’s start by discussing the circumstances that led to vocalist Sy Keeler staying home due to the illness of his son, how far in advance did you know this was going to happen as you planned out the North American tour months in advance?

Nige Rockett: Yeah, Sy’s boy has been ill for some time, and it’s gotten to the point where he’s having a lot of hospital visits, he can’t go to school, he’s got some home tutoring going on. All this has come in over the last couple of months, so even though the tour was planned months in advance, full steam ahead, it came around August that Sy told us he was going to have all these specialist appointments coming up and that it was going to be difficult for him to go on tour. So it was fairly short notice, but there was no option to cancel the tour because there had been so much work going on – the bookers, the promoters – it would have been really unfair to waste 2-3 months work.

Jeff Williams: And it wouldn’t have reflected very well on Artillery either, as they had gone through the same process we did with getting visas. So it wasn’t just us that were going to be affected.

Dead Rhetoric: You faced this before last year, trying to get over to tour and being denied by visas.

Rockett: Yeah, the bureaucracy is an absolute nightmare over here. There was no way we could cancel this.

Dead Rhetoric: Was ex-Anthrax vocalist Neil Turbin the first choice to do this tour, or did you have other singers in mind?

Rockett: Yeah, pretty much, and I’ve known Neil now for about 8 or 9 years. I know what a good vocalist he is. We spoke to several other very high profile guys within our field, and a couple of others that were slightly more mainstream as well. It was quite nice responses we got from everyone, I’m not going to name any names, but we were quite surprised they wanted to sing with Onslaught.

Williams: Given the time scale that we had to try to sort this out, we would tell them we had a North American tour, and they would say, ‘Great’- and then we would tell them it starts in two weeks (laughs). So… that’s why Neil worked.

Dead Rhetoric: Tell us about the transformation from Onslaught in its hardcore/punk style early years to the development of your thrash sound? Was it more a question of the right personnel or changing tastes and instrumental abilities that caused the shift in styles?

Rockett: Purely instrumental ability is what allowed us to do that. Obviously we come from a hardcore and punk background, and it’s still my favorite kind of music. I wanted to play something more interesting to play, as raw and energetic as punk is it’s not challenging to yourself, as you progress as a musician you push your boundaries a little bit. That was what we did.

Dead Rhetoric: To my ears, there are three distinct phases in Onslaught’s career at least in terms of your album discography. I’d like to get your thoughts on the first two albums: Power From Hell and The Force, especially in terms of how you were able to springboard the UK thrash scene. Do you feel they stand up well today?

Rockett: I’m not so sure about Power from Hell, it’s a very unique sounding record. Very dense and very dark sounding. As much as the fans love the record, with The Force coming out again, we had that re-mastered last year, Jacob Hansen who did The Sounds of Violence album re-mastered it. I listened to it a couple of months back when I got some copies sent to me, for some reason I decided to listen to it – it’s incredible. Jacob brought the sound up to date, I was really impressed. I think that album stands up.

Williams: Speaking as someone that wasn’t on those albums, listening to them purely as a punter, I would say The Force is more a true thrash metal album, where Power from Hell came from a more punk-oriented background. There was a distinct change in the music, and the production was a little better.

Dead Rhetoric: Opinions waver with the singer switch on In Search of Sanity, as ex-Grim Reaper vocalist Steve Grimmett entered the fold, and a slightly more Metallica-oriented sound factored in as well. I happen to really love this album, but many old-timers thought you had ‘sold-out’ so to speak. What are your memories of those times and what decisions within the group happened that caused this shift?

Rockett: It was a tough time really, when it should have been a really good time. It was an era of mixed fortunes and feelings. All kinds of weirdness really. We signed to Polygram off the strength of The Force album, we recorded the whole album, we demoed the album and those are really kind of raw and what seemed to be a natural progression from The Force, we had “Blood Upon the Ice”, “Shellshock”, and “Lightning War” and they were really raw. Which London Records had signed us on, but when we recorded all the vocals with Sy and mixed the album, A+R and everybody from the label came in to listen to it, and they didn’t like it. They got this for us… there was something going on behind the scenes between our management at the time and label, something was conjured up between them. We gave Sy the chance to save the situation – we sent Steve Grimmett and Sy back into the studio to record the same songs to give the comparison, and Grimmett did what he did, great singer- but not necessarily the right guy for us. The record company really liked what they heard (from Steve), and the rest is history as they say.

I love the songs on there, but I hate the album. It’s weird for me, I hate it because of everything that went on behind the scenes. That’s why we want to re-record the album with Sy on vocals, the fans want to hear it because he is the original vocalist. We want to do it in an Onslaught way, not a major label way. That’s the plan for the future. A lot of people like that album as you said, and a lot of people who love that record that didn’t necessarily like The Force or Killing Peace – as you said though, it did alienate a lot of the older fans.