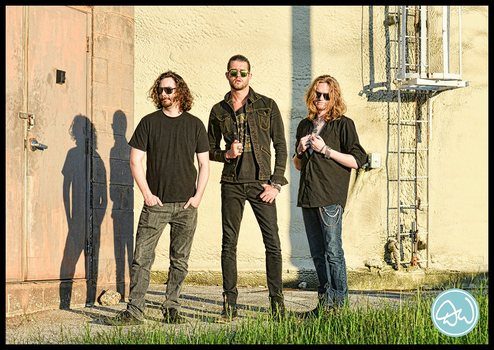 The daily grind, putting in the work, watching the slow climb, and grabbing ahold of any opportunity that comes your way. The rock and metal dreams may start in youth, but the usual success stories as adults possess years of twists, turns, and turmoil, weathering the mind, body and spirit to see who really wants it. Survival for the fittest so to speak. When it comes to Philadelphia trio On Top, they hope to be one of the new breed blazing a trail for all things classic hard rock and early 80’s heavy metal – doing what they love in their own energetic way.

Together since 2010 and coming from a diverse background of heavier thrash/death metal acts, the band has steadily issued a debut album plus a series of EP’s, all with a take on the top theme for titles (Top Heavy, Top to Bottom, Topless, and the newest effort Top Dollar). Bassist/vocalist Jaron Gulino and drummer Danny Piselli have been the anchors, filling things out with their latest guitarist Ric Haas. This trio isn’t attempting to re-write the classic metal playbook – they just wish to weave their own take through large melodic hooks, simple but effective choruses, and focused playing that keeps your toes tapping, fists banging, and cheering along.

Arriving from Los Angeles that evening to get to this local Connecticut gig, Jaron is kind enough to bring us up to speed on everything related to his activities. We talk about On Top, the shuffling guitar changes, how it is to be the ‘lightest’ band on a decidedly heavier label roster, and a healthy amount of discussion regarding the learning curves that take place when you jump on opportunities as you wish to make music a full-time career.

Dead Rhetoric: What can you tell me about your musical memories from childhood, and what moved you up to playing an instrument and starting in bands?

Jaron Gulino: Childhood and music came to light with my father. He’s a huge metal guy and loves hard rock. The first bands I was into included Van Halen, Iron Maiden- believe it or not the Yardbirds was one of the first CD’s I ever bought. He pushed them on me, I saw Eddie on the cover and he told me that I would love (Iron Maiden). I would walk up and down the beach during my summer vacation listening to “Fear of the Dark”, the live version off (of) Best of the Beast, and that ended up changing things for me. It ended up being my first concert, the Brave New World tour in 2000, with Halford, Queensrÿche, and Maiden.

My dad played bass back in the 1970’s- never really pursued it, but always had a bass around the house so I picked it up that way. The turning point for me was George Lynch. I grew up listening to thrash, Slayer, all the heavy bands. Then my eighth-grade history teacher came in one day and said that he noticed me wearing all these metal shirts- he gave me a stack of six or seven CD’s to check out. Sepultura, Testament, Nailbomb, which was Max’s other band at the time, and the oddball CD was Back for the Attack by Dokken. He said I might not dig the music, but check out “Mr. Scary”. And that was the game changer for me- George Lynch is now my number one guy- a super huge influence.

Dead Rhetoric: Did that mean you picked up the guitar and then transitioned back to bass?

Gulino: No, I’ve always been a bass guy, but I’m a guitar freak. I don’t play it at all, I just like what guys like Lynch and Doug Aldrich (do), going for broke every show. They are improvising, doing things differently every night, they take their chances and I kind of wanted to do that with my bands. Obviously, I don’t take too many chances, but I like a different approach.

Dead Rhetoric: On Top started in 2010, but you had been previously playing in thrash or heavier bands. Why did you make the transition backwards from the heavier stuff to a more basic approach?

Gulino: I was kind of fed up with the heavy stuff in my local area. I really like heavy, thrash things- but melodic though, such as the vocals for Forbidden, Overkill- it’s not really super melodic but Bobby Blitz is really singing. The bands that I was in, it was more just screaming and yelling and that only went so far for me, even though I liked the energy of it. Then I started getting more into the 80’s stuff, L.A. Guns, with a fresh approach. That’s where On Top came out. The first demo we did was very sleaze-oriented- I had the big hair, blonde hair. And then over the years we gave up the look aspect of it- and I wanted to just do the music that I want, which is all of this stuff thrown together. As you can see with the newer releases, they’ve gotten a little heavier and a little edgier. And now I can do what I want with this. Danny has been in this band since day one- he’s a death metal drummer in all his other bands, so for us to come together is a unique situation. And that’s where the sound comes from.

Dead Rhetoric: Why has it been a struggle to keep guitar players in the band- as Ric Haas is your latest one for this new EP Top Dollar?

Gulino: It’s not really been a struggle. The first guy we had Alex (Kulick), he was a child prodigy, 17 years old with a very rough home life. We raised the kid for the years he was in the band. On our first release, you can hear that he’s fresh, unique, one of the best guitar players I’ve ever played with, let alone heard. The emotions come through on this. It came to a point where he said he wanted to play jazz, go to school. Come figure, now he plays bass in a death metal band with Horrendous. That’s totally bizarre, he’s a killer player and he doesn’t even play guitar anymore. Last summer he came back with us and did a few shows for fun, he’s just like it’s fun, but I like playing bass. Then we had Brian (Davis) come in for the last two recordings Topless and Top to Bottom, he did the first demo back in the day. He’s a little older than the rest of us, he taught us all how to play growing up, he’s kind of the local teacher guy. The dude is a wizard, a major studio guy, loves recording but not so keen on playing out so much. With this band, the reason why we never were able to do too much is we were never able to play out so much. It was always two guys wanting to play, and one guy couldn’t- or vice versa. And then we all started doing other bands and time got away.

But now, I’m spinning my wheels every day of the week. If it’s Monday, Tuesday- I’m on tour. I came in from Los Angeles today and I didn’t want to cancel this date, I want to just go right forward. So we came out here- Ric plays in my other band Mach22, which is more blues-driven. But Ric is a shredder, he comes from a metal background and he just turned 18. I have another child prodigy. It’s definitely the rawest approach we’ve ever had, the other guys were more technical- but live it translates amazing.

Dead Rhetoric: Over the past few years, you’ve done more EP’s than albums – any reason why you’ve stuck to that format over the album format?

Gulino: The first album, three songs were from the first demo and two other songs were from another demo we had done when we had two guitar players. We also had five new songs written with Alex at the time- so we decided to just record a full album. We had the cash, so why not? Then when Alex left, and Brian was a session guy- we had four songs that we had been playing out but never recorded, and we wanted to do those. He came in and agreed to play on the recording, and once we got going he wanted to be a part of this, the band. That’s how Top to Bottom, the release came. Maybe a summer had gone by, we said hey, why not do another one? It’s just four more tracks, we had them and did them. And then I went through some personal relationship nonsense that put a spike in the band and all the musical stuff. That’s why it took some time between the last two releases- I kind of lost my grip on everything. We got Ric, let’s play more, wrote songs before going right into the studio, just fired them off and that’s how this release came out. I want to do another full-length album, but with four or five bands going on at once- sometimes I don’t have the time to do that… and at the same time- funds. Money comes into play, but if the funds appear and somebody is interested- we’ll do a full-length.

Dead Rhetoric: How do you feel about the label you are on Horror Pain Gore Death Productions, as it’s a diverse label as far as a roster?

Gulino: And we are definitely the lightest band on there! Mike has been a supporter since day one. He’s been around in the thrash and death metal scene forever. Growing up as a kid, all the bands locally I knew he was putting out, and he also worked for Relapse. He’s a huge old school heavy metal fan, and the first On Top record was in that Accept/Dokken vein. I showed him the EP, he knew it was different and he still wanted to put this out. We signed somewhere else for the third one, I got an offer from someone else who was good friends with my wife at the time. She’s trying to play my cards right- and I was a little disappointed. I should have gone with Mike, I feel guilty to this day as he’s been good to me. He wanted to do this again, he does a great job pushing the promotion and releasing the product.

Dead Rhetoric: Concerning the new EP, how do you think the songwriting and recording sessions went?

Gulino: The performances obviously are a lot different because of Ric. We went to a different studio this time, somewhere out in New Jersey in the woods. It’s got a little bit more of a vintage feel to it, we went to an old 70’s style studio, which is cool. I think this band needs a little bit more of a modern edge, we used Chris Collier, he does Lynch Mob, KXM, did some work with Korn recently. He has a modern feel with technology, his mixing and mastering booms. And this didn’t translate well in terms of where we tracked, he could only do so much to make this shine- whereas we used a lot of digital stuff on the last two recordings. In terms of that process, that’s the main difference- but overall, we are pretty happy with how it came out. The tones actually compliment Ric a little more on this one- but I think the next one we are going to light things up a little heavier, a little more modern. 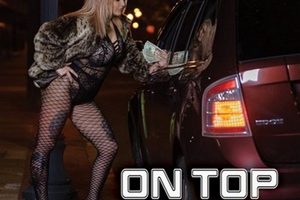