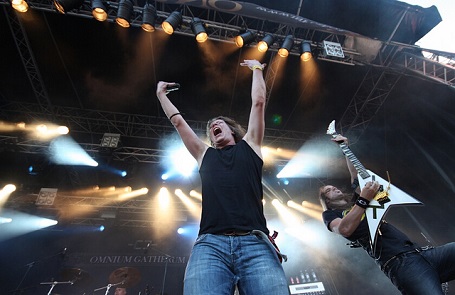 Blistering.com: “Everfields” is a great choice for an opener, and it’s the longest song of the album and your longest to date. What made it the choice to open the album?

Vanhala: “Everfields” was composed to be the epic closing song of the album in the first place, but later when finished composing the song “Deep Cold” we found out that this one was even more THE ultimate last song of the album. So we did a big re-organizing on the album drama plans and liked the brainstorm to also open and close with 9 minute opuses! It’s also fresh to do something differently here than to open the album with “video-hit-song-like” like we’ve done in the all previous albums, it would’ve been really boring to do that again…

Blistering.com: This is Jukka’s third album with the band and it’s safe to he’s a tremendous improvement over Antti [Filppu, ex vocals]. Does this give you added flexibility when writing songs? Some of his clean vocals on the title track are really impressive.

Vanhala: Jukka does really good job on both lyrical and vocal side and of course it gives me a needed boost and kick ass to work with that kind of vocalist and the dude. There’s also some backing clean vox by the mighty [producer/engineer] Dan Swanö on the album so it gives the cleans the perfect topping and finishing, and it was also ace to work with my teenage-idol Mr. Edge pf Sanity here!

Blistering.com: “The Distance” has some melodic similarities to “Just Signs” off Snake’s Way. Was the intentional and if so, is there a connection between the two songs?

Vanhala: Yep, you got the catch here! It’s the same chorus riff and melody, but “The Distance” was the original idea what it was meant to be and composed some years ago. “Just Signs” arrangement just happened during The Snake Way sessions and that was also really cool by then, but now I wanted to resurrect the original idea. At first “The Distance” was entitled to “Just Saints” to have more clearer pointing to “Just Signs” song, but Jukka re-titled the song somewhere in the middle. Hopefully it isn’t wrong to steal from your own past, ha-ha.

Blistering.com: If there was a real standout on the album, it would be “Soul Journeys.” Has there been any consideration given to a first single?

Vanhala: Well, “Soul Journeys” will be the first video song from the album, so it’s kind of a “death metal single” then. In fact most of this song’s riffs have been haunting also, as the skeletons in the closet many years by now, but now the time was right to finish this track and it turned out to be a magnificent song, so it was worth to wait like, five years with this one, as now it’s matured and is shining bright! Luckily, I have big piles of endless mini-disc archives from behind many years, so I should check ’em all out and filter these kind of diamonds out there also for the records to come…

Blistering.com: The band is going to celebrate 15 years next year. Have you given any thought to this milestone?

Vanhala: Huh, 15 year old band, that’s half of my lifetime! It’s been a long road and surely we’re going to feast with that thought on our next year’s shows. But we surely ain’t gonna stop now when the spirits are high here and good things have started to happen, somewhere here the teenage metal have been matured to adult-oriented death metal and it’s a pleasure!

Blistering.com: What did you take away from the years you were going between Rage of Achilles, Nuclear Blast, and Candlelight? What makes Lifeforce the right home for OG now?

Vanhala: There ain’t no business like show business! The Lifeforcers showed us some pure interest and they let us punsters do our epic-sophisticated-proggy-non-commercial-adultrock-melodeathmetal without limitations and proved to be real music lovers, and that’s the way it should be in this business field. The truth is what matters.