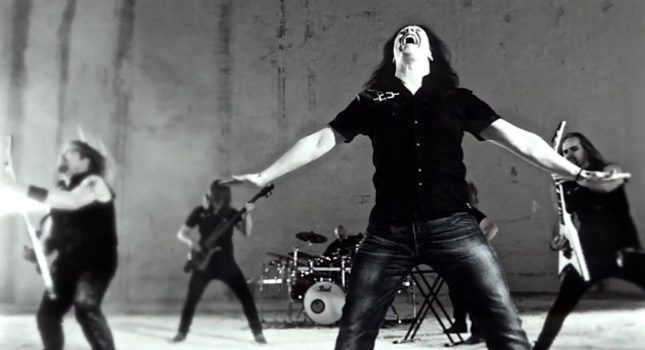 In 2004, Omnium Gatherum signed with Nuclear Blast for the release of its Years in Waste album. The deal was meant to capitalize on the exploding melodic death metal movement, to which the Finns were very much a part of. However, OG weren’t a cut off the ‘ol Gothenburg chopping block, but instead were far more progressive and dare we say ‘dirty’ than their contemporaries. It was reflected in Years in Waste, an album certainly with merit, but not quite at the level of the triumphant, melody-dominated affairs of recent OG. The Nuclear Blast brass were not pleased by the album’s average sales and subsequently dropped the band. Off OG went to Candlelight for two albums, Lifeforce for another three, which brings us to today…

OG was been given another shot at big metal independent label glory when Century Media picked up the band’s new Grey Heavens for release in North America. Knowing a good thing when they saw one (how could they not?), Century Media signed OG to a worldwide deal, setting the table for what should be a fruitful partnership. After all, no melodic death metal band stands taller than OG at the present time. Such was the mood reflected when we sat down for dinner and an interview with vocalist Jukka Pelkonen and guitarist/founding member Markus Vanhala prior to the band’s November 19 show in support of Sonata Arctica and Leaves’ Eyes in Pittsburgh. Read on…

Jukka Pelkonen: It’s been good, gig-wise. There’s good people on the tour; the whole package is good. We’ve had some technical difficulties, though. We’ve changed the bus two or three times.

Markus Vanhala: We were a little afraid of the package. Sonata Arctica and Leaves’ Eyes are a bit different than OG, but that’s also one reason why we wanted to do this tour. We’ve already played for the melo-death audience.

Dead Rhetoric: You don’t normally go out with bands like this. Why did you take this tour?

Pelkonen: Yeah, partly to come over again, but to reach new audiences and people. The whole stretch of the metal community is widespread and open, so I think we’re going to have some new people to enjoy our music. So far it’s been just like that.

Dead Rhetoric: You’d be playing in front of the same crowds.

Vanhala: We can tell that most of the people have never seen us before on this tour. It’s always during the first two or three songs, people are like, “Who are these dudes?” They always end up being into it. That’s why we are here.

Dead Rhetoric: We have to talk about the lineup change with your new drummer, Tuomo [Latvala]. How did that come about? Jarmo [Pikka] was with the band for quite some time…

Vanhala: It was last year that Tuomo played the U.S. tour with us. He was a fill-in drummer. Jarmo wanted to have a one-year break.

Pelkonen: He had a second child and they were moving to a new place, so he was super-busy.

Vanhala: He had these “adult” problems. It just became clear he doesn’t have any more time for the band. Tuomo had already played with us for a year, so you could say it was easy. I had been playing with Jarmo for 18 years.

Dead Rhetoric: Were you sad to see him go?

Pelkonen: Yeah, of course. We’re really good friends with Jarmo, so it’s a very sad thing. But, we’re really fortunate that Tuomo is a really fucking cool guy, an excellent player, and he fits into the group quite well. He was able to step into things quickly.

Vanhala: Since we had this one-year “honeymoon,” it’s been pretty natural.

Pelkonen: The transition was quite easy.

Vanhala: Jarmo and Tuomo are similar looking guys with a bald head. It was funny, during the European tour this year, many people were shouting “Jarmo! Give us your drumsticks!” And Tuomo was going “I’m not Jarmo!”

Dead Rhetoric: The Century Media deal is now worldwide. We’ve talked before about your first experience on a big label with Nuclear Blast, which wasn’t that positive. How do you think it will go this time?

Vanhala: A leap of faith.

Pelkonen: The fact of the matter is, the promotion is going to be bigger. We have a bigger engine behind us now. A lot of things can happen with that. Let’s see what happens. We’re going to tour and have fun as always, and if they can add something to the equation, that will be nice.

Vanhala: For the last five years, we’ve been touring insanely. Then, being on Lifeforce was a really good label for us. They did a really good job in Germany, Central Europe, and Finland, but they cannot do a lot in North America.

Pelkonen: Promotion-wise in North America and the far Eastern countries, they were a real gamble.

Dead Rhetoric: You do well in Japan, though.

Vanhala: We have a new label in Japan for Grey Heavens, Marquee/Avalon. A big metal label. The last time we played in Tokyo, we played two nights and one of the nights was sold-out.

Pelkonen: It was a co-headlining tour with Mors Principium Est, but we ended up playing every show but one as headliner. Those guys were really amazing and good guys to tour with.

Dead Rhetoric: It’s amazing that Lifeforce doesn’t have much of a North American presence, yet, you’re more popular here than ever.

Vanhala: We’ve been fighting for our rights.

Pelkonen: It’s a good thing for Lifeforce Records. A lot of people get to know them through us.

Vanhala: Yeah, of course. This has been a long road, so you can really enjoy that it’s going forward. It’s been 20 years…

Pelkonen: And ten years for me.

Vanhala: It’s been a long road, but it’s always been upward for the band. Like Sonata Arctica, their first album was a huge success, then they’ve had some ups and downs.

Dead Rhetoric: For Grey Heavens, you made a point to write songs in a more “commercial” manner, if you will. They’re more straightforward. Why such the approach?

Pelkonen: For Grey Heavens, we tried to make it a bit more aggressive and straightforward.

Pelkonen: It’s a combination of New World Shadows and Beyond. It still has a lot of melodies; the OG mark is there. It’s extremely important to have these kind of styles, like old-school straightforward songs.

Dead Rhetoric: Like “Skyline,” which is the simplest song you’ve written.

Vanhala: Oh yeah. It was a statement for us because New World Shadows and Beyond started slowly, they had these epic songs as the first and last song. Beyond was starting with the intro and ended with the same thing. This time we wanted to go for it. I spoke about the album with our art visionary, Olli [Lappalainen]. He’s been our graphic designer since the start. He’s my sounding board. I speak about the music with him. Olli said to me we should do the album like Star Wars: The Empire Strikes Back. In the movie, it starts straight into the battle and ends with conflict.

Pelkonen: Naturally, the next one will be the Return of the Jedi.

Vanhala: We have to figure out what is the Jedi we are returning to.

Pelkonen: After that, it’s going to be something totally different.

Vanhala: Jedi is the best one in my opinion, so the next OG album will be the best.

Pelkonen: With this album, we wanted to push the music forward with a similar OG style, but add something more to it.

Dead Rhetoric: With you doing Insomnium full-time, what’s the workload looking like. Both bands put albums out in 2016.

Vanhala: Next year will be hard. [laughs]

Dead Rhetoric: They should clone you.

Pelkonen: Or have him as a hologram.

Vanhala: We did the new album [Winter’s Gate] in full on the Finnish tour which was fun because it was different. The guys were nice enough even when the Insomnium album came out, everyone wanted to wait while OG is doing the U.S. tour. Scheduling is making my life hell.

Dead Rhetoric: I remember last year when you did the tour with OG and Insomnium.

Vanhala: It was pretty hard, but doable.

Pelkonen: He did the same thing in Europe.

Dead Rhetoric: You’re on the same label now, so that helps.

Vanhala: That’s one of the things that when I’m an old geezer I can say to the young guys in the pub “When I was 35, I played over 100 gigs in two months.”

Dead Rhetoric: Do you think the fact Insomnuim does so well helped OG get signed to Century Media?

Vanhala: Yeah, we know the people. The funny thing with Century Media and we’ve rarely said this in interviews is that when we were touring in Europe in 2009 with Swallow the Sun and Insomnium, Century Media was interested in OG. They came to see our gig, but they signed Insomnium. Jens Pruter, who is the European A&R guy, he’s been in constant contact with me after that. He was laughing that finally he has the trinity of that night. In the end, all’s well.

Dead Rhetoric: With it being your 20th anniversary, you have a lot of early demos like Forbidden Decay and the self-titled demo. Have you thought about reissuing them?

Vanhala: Not those ones. [laughs] They’re really poor sound quality. The two last demos were okay like Gardens, Temples…This Hell and Wastrel. But Wastrel was already good on the Steal the Light EP, but the two first ones…we were stupid back then because we wanted to save money. We didn’t have any money so we did it ourselves. The songs are good, but the quality is poor, especially Forbidden Decay. It’s like black metal. You cannot hear anything.

Dead Rhetoric: Bands will re-record their early demos or albums. Have you thought of doing that?

Pelkonen: We actually re-did “Son’s Thoughts” off Spirts and August Light for Grey Heavens. It’s on the LP version. There’s a little bit of changes, not in the lyrics. The verses are spoken in a way, there’s a little differences here and there.

Vanhala: The nice thing about covering “Son’s Thoughts” was that Jukka was already there for Spirits doing guest vocals.

Dead Rhetoric: Finally, what’s next? Have you started to think about new songs?

Pelkonen: Yes, we have. We have a couple of rough demos that Markus has been doing. I’ve been writing some lyrics and arrangements for the songs.