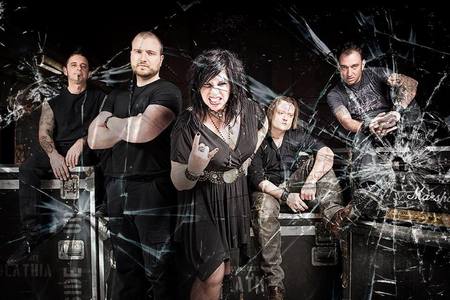 You never know when you are going to find that next killer act. On a spontaneous trip to catch Amaranthe on their last tour in the fall, this scribe ended up in Cleveland, Ohio, where Olathia was one of the opening bands. Taking an approach that was routed in the traditional, there was also a modern edge and flair to the band that spoke volumes in the live arena. The band also released their debut album, Hunters, last year, which carried over that same essence in its recording. Strong guitarwork, killer vocals, and plenty of hooks, it’s an easy album to get wrapped up in.

Reaching out to get some more information on the band, we were able to set up a Skype chat with most of the band, including Chris Emig (vocals), Jeff Morrow (drums), JD Donatelli (bass), and Jake Nicholson (guitars). Being a newer band, we were able to discuss the perks of self-promotion, the idea that less can be more, the band’s sound, and the Cleveland scene itself.

Dead Rhetoric: You released Hunters last year. What kind of response have you gotten to it so far?

Chris Emig: It’s been really cool. A lot of the classic people have really embraced it, even though it has a modern edge. We are getting a lot of cross-over. We are getting a younger audience, and even a lot of the death metal guys totally dig what we are doing. I think it has to do with the musicianship of the guys – the intricacies that they have, which goes along with a lot of the technical death metal around here. You never know who is going to connect with it, and a lot of people that I didn’t expect to really dig it.

Jeff Morrow: My son, who is going to be 14, loves the Olathia stuff. I’ve played in a few projects, but he wants to come to all of those Olathia shows. He’s digging it.

Dead Rhetoric: In terms of having that traditional sound, how do you feel that the band moves away into other ground?

Morrow: I love it, and it’s a pleasure just to play the music. I think that everybody comes from different interests and grew up with different stuff. Music is where the heart is – our hearts are in different places and come in bringing our own heart, and interests in music. When we come together, the output is Olathia. It’s definitely not simplistic grooves all the time, but you can attach to a lot of the groove, which I am all about. It feels good to play, so I’m hoping that it feels good to hear too.

Emig: I agree with Jeff. A lot of people have their own background and interests, but when we are writing, we are trying to not have any filler. We are trying to push the boundaries, and I think that is where it travels into different directions. All of the classic stuff is kick ass, with all the galloping riffs and stuff, but we want more.

Dead Rhetoric: This goes against what you were just saying, but do you feel that in today’s day and age, having more of a traditional sound makes the band a harder sell?

Morrow: My personal opinion is that we’ve never been a band that has been overly concerned with marketability and sales. We want people to dig it, but even back in the day when I started to play music, it wasn’t about whether anyone is going to like it. It was about laying it out whatever way we want, and if people dig it, that’s very cool. We are getting to the point in our music careers that we want people to latch on, but we’ve never made it a primary concern.

JD Donatelli: I think a lot of people still like the traditional sound. We all grew up with the same influences. A lot of people can move on, but a lot of people really get stuck in that. You talk about crossover audience, eventually it comes back around. There are a lot of younger people that grab on to that.

Jake Nicholson: As a guitar player, I feel that if you start playing in this very day, you might really dig Avenged Sevenfold and the modern stuff, but they are also influenced by the classic bands. As you do some research, you are going to find it and think that it kicks ass. It does come full-circle – if you start twenty years ago or now, you will find those traditional metal powers, even by accident.

Emig: It stands the test of time. What was interesting was that when we first started writing and people would ask, “What do you sound like?” I had no answer for them. We were just writing what we wanted to write and push our boundaries and be creative, and have dynamics. We had one fan say it was like Epica dating Nevermore dating Iron Maiden! We’ve gotten so many different things – I don’t know how to put it; there’s definitely traditional influences but there’s just a lot of influences. It’s kind of like the taco truck that isn’t making traditional tacos, but it’s a taco. They put all this Asian stuff or whatever – it’s still a taco, but it’s just different.

Morrow: And if it tastes good, more of it please!

Dead Rhetoric: What can you tell me about the Cleveland scene?

Emig: As far as Cleveland, we are really lucky with our college radio. There’s a ton of metal shows and a lot of underground support for what we do. There’s a lot of really good clubs to that vary in size, that cater not only to metal, but all sorts of original music. This past summer or fall, on a weekend, you could have your choice of like 3-5 places to go to in one general area – which is kick ass. It shows a lot of strength. There’s a lot of musicians at all sorts of levels, so you can always see someone new or people that have been around for a while. I think the best thing about Cleveland is really the underground scene that supports original music in all formats.

Morrow: I totally agree. Don’t get me wrong, it’s just like any other place you go to – some of them have little niche-y stuff happening, but for the most part, probably 75% of people that go to see shows are pretty similar to back in the day. People on the weekend who are looking for something to do – check out some bands and have a few drinks, having a good time. People are there to support the scene. I’m not so sure it’s exactly like it was back in the day, because all these clubs would be packed. But people that go now are definitely hardcore about it and have a lot of passion – and that’s super cool for the bands because they are super-pumped to check out music and that’s always a good time.

Emig: It’s so very much a word-of-mouth thing. There are some good record stores that you can hit and post flyers for your show – that definitely gets the word out. The other kick ass thing about Cleveland – you’ve got New York over here, Chicago over there, you can head south – weekend warrior all the way.

Dead Rhetoric: When I saw Olathia, there did seem to be a group that was very aware of you and were fans. Do you feel the band is starting to get more of a reputation, at least in the Cleveland area?

Emig: We definitely have some traction in Cleveland and it’s already starting to branch out. We are going to be following-up by hitting wider areas to do performances. We are still a newer band, we haven’t been around that much, but word is out there and it’s pretty kick ass.

Morrow: I think Chris is being a bit modest here. Some of her weight that she carries was brought over to Olathia and that is super cool for the band. The rest of the guys in the band are also not new at all. We have been around the block once or twice, so we have an idea of how to play a little bit [laughs], and with her [Chris], it’s a pretty powerful package with Olathia and people seem to be picking up on it. It’s awesome.

Emig: What Jeff is talking about is that before Olathia, I was in a band called Cellbound. We had a real great 8-year run, and toured regionally and had a kick ass time with it. That ended in 2013, and then this started with Jeff in late 2014. So a lot of people would ask, “What’s up Chris,” and I’d say, “wait until you see.”

Dead Rhetoric: I meant to ask about that – Olathia is a fairly new band, but everyone has a lot of experience…

Emig: Very much so. When Cellbound wrapped up, I had heard of Jeff but didn’t know him personally. What happened was that our drummer retired from music to start a family. Jeff had inquired about drumming, but I said that we are not…but I’m interested in doing something else. In Cellbound, I had sort of shared vocal duties with this dude Tom, but it had more of a metalcore/hardcore edge. We had a great time, but I wanted to do something else. I wanted to do all the singing and do something with a lot of dynamics – shredding guitars for sure. Jake used to be in a band called Black Valor, and we played many shows together. The first time I saw him, I was blown away. We met Steve [Albenze], who was a transplant from Columbus. I had played with him, crossing paths in Columbus. JD is the newest blood around here, although he has been in a lot of good bands and has a lot of good experience.

Donatelli: Just like you were saying, I did a lot of shows with Black Valor, and my previous band did shows with Olathia.

Emig: There were a lot of seasoned things that came together in a new taco [laughs]. 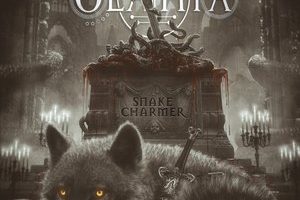