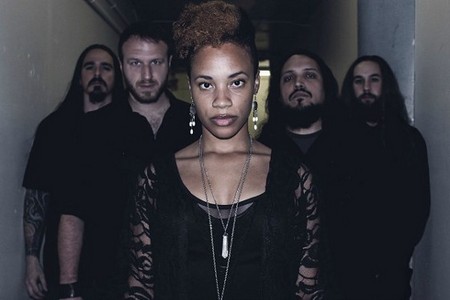 Check out Part I HERE.

Dead Rhetoric: You’ve come up with some interesting cover songs by Emperor, Candlemass, Led Zeppelin, Pink Floyd and on this album, The Moody Blues “Nights in White Satin”. What criteria makes for an ideal Oceans of Slumber interpretation in the cover realm?

Beverly: Moodiness. I pick most of that- it was just a way to… the general outlook of everything we do, I manage the band and take care of most of that stuff on that end. The outlook because of the business side, we’ve got to do what we can and we want to have fun while maintaining professionalism. While the band is still active, so with the Blue EP the outlook was we thought we could pull off the covers in a live session. How effecting was that music on us as musicians, by certain songs, what influence and how did they make us hear differently. The criteria (relates to) mood, does it give you that little special feeling in your chest and make you think, make you cry, make you happy. The Pink Floyd song we picked “On the Turning Away” was based solely off the guitar solo. That is Gilmour’s second best guitar solo, ever. And Sean is a phenomenal guitar player and nailed that solo. It’s things like that… the big embracing choruses, the message of taking in and forgiving, I had the idea of making things more choral at the end, expanding on the sensibilities of it. With the Moody Blues and “Nights in White Satin”, that’s one of the most beautiful songs ever written. It is about forlorn love, the chase and the pursuit, loss of that- it goes perfectly with our record. A casual listener may think this is cool, or why did we put this on the record- we as music fans say, we might not have the opportunity to do this again so we want to create what we want to create.

Dead Rhetoric: Does that mean the best David Gilmour solo is in “Comfortably Numb”?

Beverly: That is absolutely right. That’s one of those ones, talking back to your dad or whoever your parental figure is. You don’t mess with “Comfortably Numb”, we could do it but do you get into trying to take that song on. So it was a respectfully leaving that alone to do our number two pick.

Dead Rhetoric: You’ll be touring Europe soon with My Dying Bride – who are some of your other ideal touring partners, as it seems to me that because of your wide-open sound you can probably go through an interesting cross-section of metal and non-metal partners if you wish?

Beverly: Funny that you mention that because in preparation for this upcoming tour, as we construct sets for this… the cool thing about My Dying Bride is they still have that death metal side to them, they have that mid-paced aspect, Aaron still sings lows. We are able to go in and not play our fastest, craziest material but we can play some more death metal if we want. It’s a really cool pairing for our first European tour- not only loving My Dying Bride, but that they are more open-ended than most bands. As far as who we would want to tour with- definitely Paradise Lost, Amorphis – which we just missed, because their tour starts in two weeks. Obviously Opeth because of everything, from the beginning to now. With crazier far reaching stuff, we could tour with newer bands like Ne Obliviscaris and even into The Faceless and Between the Buried and Me that do a techy approach that we kind of do also. We could crossover into Behemoth world, we have some extreme stuff in our music. To the lighter side, bands like Crippled Black Phoenix and Katatonia, Chelsea Wolf, we do cover a lot of territory and kind of could be chameleons for things that hybrid and crossover to other genres or other people. We hover around doom enough, it is the superior emotional outlet side for us. In that world you have Paradise Lost, Anathema, My Dying Bride… even Ghost. Sadly with the loss of Peter, Riverside is another band that we would have loved to tour with.

Dead Rhetoric: Who are a few bands that everyone in Oceans of Slumber can agree upon that have garnered the most respect and admiration, to the point that you’d love to model your career based on their outlook and output?

Beverly: Universally in the band, it makes 1000% sense to us, maybe not to outsiders, but Type O Negative. No punches held, the outlook was very whatever it takes to make a song, there was no fear of tackling a genre. In that way the respect and carryover that Pete had for his whole life, from Fallout to Carnivore to Type O Negative to the end of his reign, that’s a big band that we wish we could have some kind of a heritage like. In a more modern sense, Opeth, Paradise Lost, Amorphis- they reinvented themselves. They inspire us and we hope to mirror some of the successes they’ve had. Again we are fans first and foremost who happen to be musicians. Gojira, from inception to From Mars to Sirius, they’ve been very consistent and turned into this worldwide success. To be on that level would be awesome, on a creative outlook. It would be great to play music from a creative standpoint and not purely for financial gain, that’s the dream for all of us. Even with Opeth and their shedding of their old skin. It doesn’t bother me as much as it does other people.

Dead Rhetoric: Does this feel like a tough uphill climb to establish oneself in a scene where digital music and instant technology takes center stage over proper physical products?

Beverly: Oh yeah, it’s impossible! We are already in a downslide. We are a new band, we have some decent buzz behind us but what that equates to… the more magazines and everything you get involved with, the carryover is hardly anything. People are able to just… with the ability to stream music that’s great because the music can get into everybody’s hands but as far as numbers that are accounted for, there aren’t any. The big push with vinyl is making bands accountable in a way- fans are coming out and being more supportive in the purchase world than they were in the past four or five years. They are getting worse on the touring side of it, especially in the United States. Things seem to be better in Europe, in the US nobody’s going to the shows- people are going to watch bootleg videos on YouTube online. I have a huge outlook on this- when the digital realm came it did a certain thing, but you had to be established in the beginning. When the home recording and cheaper recording methods took over, it started to destroy things. When you make it so that everyone can start creating their own music, it flooded the market and the funnel gets smaller and the top gets larger- you have to have record labels, you have to have the umbrella, the promotion, buy the ads- as an independent artist it’s a never ending cycle of money.

Success in the music industry is based entirely off of finances- so while an independent band tries to be successful and they start garnering certain attention, at what dollar point do you stop and realize that this is not a successful business model. I’m paying $5,000-$10,000 in recording costs and advertising, and then record companies come in to swoop in to take over and the numbers aren’t as good, so you are screwed. The home recording and live market has killed a lot of local scenes and their ability to prosper, anybody and everybody is able to create music now and say they are a band. With physical sales and interest in those markets and those bands waning- a record label is releasing maybe 5-10 records a year, versus one that is releasing 5-10 a month. It’s a numbers games, as they have to sell $5,000 worth of product to offset costs. Here in Houston you have a bunch of bands that probably need to spend more time honing their craft, working on more of what they are doing. A national comes through so they buy on to the show, then local fans… say Megadeth is coming through and they have a local opener. The fans may see the local band, and it is sub-par quality so that’s what they think the city has to offer. They are relegated eternally as an opening, local band. In every single American market as a result, people are much more reluctant to buy new music and stick with the old standards like Anthrax and Megadeth. People feel they can trust these bands regardless of the quality, and they would have to have their face shoved into the shit to check out new artists. It’s an impossible climb, and you have to do everything you can to flash silver, and win over an ADD crowd that is not interested in anything you do.