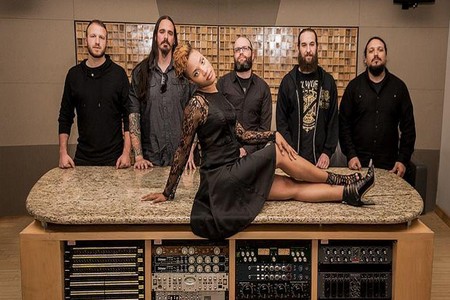 Dead Rhetoric: How did the three short segments “Lullaby”, “Laid to Rest”, and “How Tall the Trees” come to be? In my mind it’s a smart decision to offer those brief respites as the album contains a lot of musical/lyrical information to process…

Beverly: The odd thing is we wish that we could send out explanations for the whole record, and the ideas behind it. Between “Lullaby” and “Laid to Rest”, it’s almost like a changing of the scenes. Towards the end of the first movement you have “Lullaby”, which is meant to be a song. It’s telling you goodbye and I’m only here when you need me and you are only here when you want me -which leads into “Laid to Rest”. That was something Anthony had put together for a bit, and Cammie’s father used to sing “Lullaby” to her as a child, so when she came into the band she would hum this little melody. So we heard her singing, what a beautiful melody – and our bass player Keegan had a piece that would be in key with this. Let’s try to apply the two and see what it comes out as. So “Lullaby” was happenstance, it worked out and fit in perfectly because the record was finished before then. We had another song that we ditched in lieu of putting that on.

“How Tall the Trees” is basically about the area that I grew up in, this family cemetery because the whole record is about loss, tragedy, and hope also. Since we write everything with a picture or cinematic background, putting ourselves in a position of empathy. With “How Tall the Trees”, it was meant to lead into “…This Road”, and to lead into that song we needed something that was like a foot journey through self-enlightenment and self-doubt. There is a lot of thought in how we approach everything and segue everything. That’s kind of the same thing with “Good Life” – we have a buddy that’s an amazing native flute player named Dallas Brown from Colorado. He plays an ancient whistle and we mentioned to him that we had a track that was like a malnourished Dead Can Dance meets native sounding thing, and he was interested. We put as much time into the interludes as we do into the writing of the songs. The flow of everything is based off that, we lead each new segment and each new picture with these small windows.

Dead Rhetoric: Is it a difficult process to decide when to go full bore with the extreme elements and when to lay back into more of a hook or groove? Which song(s) on the new record do you believe took the biggest transformation from initial conception to final outcome?

Beverly: No, everything is a then and there moment. There will be times when I do a lot of dictation on the direction of what we are doing. Anthony and I have very high educations when it comes to music, so speaking between the two of us is fairly easy. Sean comes from the more 90’s side of everything, we trust him to lead the straight riffing, he wrote most of “Sunlight” and “Suffer the Last Bridge”. He is on a different side of extreme than Anthony and I are, I share that with him individually too. One of us will hum out an idea for the flow of it, whoever comes up with the part we will run it through a couple of ideas. Rhythmically that’s where I come in, it may be a doom riff but we could do any number of sub-divisions and that can change the whole vibe of the piece. It’s running with an idea – there are no pre-conceived notions to start with writing a fast song. It’s a lot simpler than people would maybe think. We could go more tech if we wanted, but we are only writing with what the song or the vibe needs. Applications where applicable. Our abilities to go into black metal and death metal territories are just there, and we are lucky for that. We are not scared of that side, some people may fear the darkness or the extremity may run people off, we see it as an opportunity for dynamics and intensity. You can only generate intensity in so many ways, and that’s with note choices, dissonance, walls of guitars, or speed. And a sinister element of some sort.

The song that took the most change from beginning to end is “Apopologue”. That was a song that I wrote most of long ago, the guys got ahold of it and pieced things back together. It’s actually an old song from one of our old bands that we put together, a band called Demonical Genuflection. We had this idea of retro-fitting this super evil death metal song and having clean vocals over it. The result is one of the most unique tracks on the whole record. You take all the elements of this sinister, Incantation-esque death song and you put these bigger elements of the chord extensions, there’s actually a Theremin at the end. When it goes back to the doom section at the end there’s a singing Theremin part that’s the main melodic line. It pitches up and down for the beginning of each measure. At the beginning of each section, the 12 bar sections, there are these church bells and that inspiration came from the band Archgoat, which is a very, very extreme death metal band. It’s odd, I don’t see the lines because I’ve been playing death metal and grindcore my whole life. And I also grew up listening to a lot of Pink Floyd and Led Zeppelin. It makes no sense to not play in those areas together- if you have a direction that aids or adds, what’s it going to hurt to put it in there.

Dead Rhetoric: Where does Oceans of Slumber come from on a lyrical perspective?

Beverly: (The lyrics) are as much the focus of what their purpose is. In the same way you have to put thought into the intricacies of melodies you have to put thought into what you are singing about. The lyrics are very real, they have to effect and possess emotional leanings. Moving forward as Cammie writes more, it’s a comfortable enough position where she’s extremely intelligent, well read and well-written enough that we trust her to take care of most of the lyrical stuff from here on out.

Dead Rhetoric: How do you feel the brief tour went last year across North America with Evergrey and Voyager? What takeaways do you have as far as live performance that you will apply in the future?

Beverly: Well Sean, Cammie, and I are huge Evergrey fans. Especially Sean and I, all the way back to their beginning. So to have the opportunity to go on tour with those guys was immense for us. Just as an experience, taking it for what it is- getting to tour with Evergrey and getting to see them play every night. Also, I am close friends with most of the guys in the band- so there were two positives right from the get go. The third was going on tour with a band like Evergrey who you love and respect so much and seeing the ups and downs of band that’s that good when they come to America. It was something I was aware of as well as our keyboard player Beau, as we are both seasoned with touring and we all know that America can absolutely just kill bands. Seeing them at their best in front of small crowds and they are still putting on a show, it was a lesson for all of us of how you should carry yourselves and how you approach this.

The business side of this is getting worse and worse. As the years go by until we figure out the next medium or way to present to have the arts supported, it’s going to be this way or worse. It was a good way for us to play in front of people and make new friends and fans, but it was disappointing to see have bands like Evergrey and Voyager have to submit to the downfalls of local promoters. They get sold on a show and all they have to do is cover the tally of it- there’s no push locally, this whole pay to play thing where bands are coming through with 4-5 bands a piece is killing the local market. You aren’t getting the opportunity for the local bands to rise and survive or cut their teeth. Overall the experience was perfect, both extremes of the music industry in a touring world.