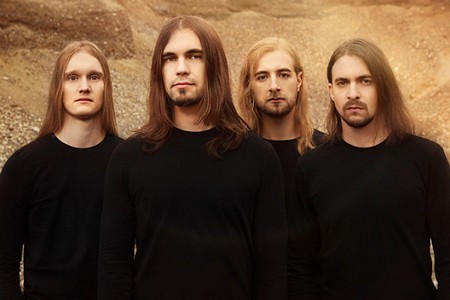 You can read Part I of our interview with Steffen Kummerer HERE.

Dead Rhetoric: Obscura has gone through a lot of line-up changes – most recently with Hannes [Grossmann] and Christian [Munzner]. Does it provide any challenge when you are trying to come up with material for the next album when you have people leaving and entering?

Kummerer: Line-up changes are never good for a band, in my opinion. But on the other hand, what band hasn’t had line-up changes in their history? I try to see it from a positive perspective. We recorded two successful albums, with Cosmogenesis and Omnivium, but when we have been at the point where we would have forced an album – it would have been possible to record Akroasis with the previous line-up, but everyone would have to make compromises – no one would be happy in the end. If you are honest with yourself, who wants to put out an album that they aren’t happy with? We were all mature enough and we talked to each other and figured out it wouldn’t work that way. So Christian decided to step down as a guitarist to focus more on his teaching and forming a power metal band. Hannes stepped down with his vision of what he wanted – a more experimental and progressive type of death metal [Alkaloid], and that’s fine. It’s okay. The fans have three bands now! If they like all three, that’s totally cool. What’s better than more music for everybody?

But on the other hand, it causes a struggle to find new members. To see if the members fit into the group – it takes time. I think it cost us a year. We have a history of line-up changes, but we started out as teenagers and your mindset is changing all the time. The first two years we had line-up changes because when you are sixteen and seventeen, no one takes it seriously. Later as we grew up and become students, many of us had to decide whether to study or work somewhere else. That caused more line-up changes. When Obscura became a more professional touring band, from 2009 through 2013, we played about 350 shows in total. At that stage, we couldn’t make a living out music only, so we had to do double-duty between touring, writing albums, and working. This burns you out. It felt like the time that we needed to split and it’s okay. I’m happy with everyone, even the people back when we started in 2002; they had their share of this band. There’s no bad feelings – it’s all easy and I’m happy we are making music and the band is still alive. Let’s keep it like that.

Dead Rhetoric: “Weltseele” is a bit longer than the usual Obscura song. Were there any different approaches made to this song than your other tracks?

Kummerer: This song had many stages. We had a few things planned, and then other things just came through natural processes. What I wanted to do was to write a long song to close the album, similar to “Centric Flow” off Cosmogenesis. That song was like 7-8 minutes and was kind of split into two parts, with the first part of the song and then a long fade-out. So we wanted to do something like that, but on a different level. “Weltseele” was based on a 5-minute track Linus Klausenitzer wrote down. Then our second guitarist at the time, Tom Geldschläger, brought up the idea to split the song into two parts and added a long, acoustic break as well as an intro and outro. Then the song was 10-minutes long. We felt the middle was a little long, and we don’t cut things out – we would rather go with the “more is always more” way and put something in. So I came up with the idea of adding a string section to it.

We had string sections on the very first demo and the first album, Retribution, but at the same time, this is the last song on the album – Akroasis is part of a four album concept (part 3), so we end this album with a spoiler for the next album. So working with orchestras is going to happen on the next album as well. We hired someone from Berlin to arrange it, to get something more out of the song. We got in touch with the Berlin Symphonics, and from there we hired a couple of string players. This was not a keyboard section – it was real playing and musicianship. Somehow, all of a sudden we had a 15-minute song! Everyone was putting in ideas and throwing in arrangements. Our drummer, Sebastian [Lanser] arranged some super bizarre drum lines over it, in the middle part, that were almost Opeth and Porcupine Tree-ish.

I think it’s the highlight of the album. It’s unique in terms of length, but also in terms of arrangement. It’s a very special song to me. I am not sure if we are going to play it live – it might happen on a headline run if we have more time. It underlines that we are not only playing tech death metal, we have different musical background from each member. It’s a good end for the album. It’s epic, it’s long, and it’s brutal. You’ve got acoustic guitars, bizarre vocoders, blastbeats, shredding guitars – basically everything.

Dead Rhetoric: As you mention, the band has been around for a while. Is there anything you’d like to do with the band that you haven’t been able to accomplish yet?

Kummerer: We set new goals with each album, but personally, I would like to play live shows in places where we haven’t been yet. We haven’t been to Australia or South America. I would like to go to Iceland, Turkey, or Africa, for example. From a creative point of view, I want to finish this four-album concept and then make the biggest DVD production possible. Capturing one album in its entirety on a different concept. I would love to do that, but I’m not sure we could get the budget for that. But there’s so much music left to write. We have a good vibe in the band right now. When you are in a band, 50% is music, but 50% is personal relations – working with friends and hanging out with everybody. If you are playing 30 shows in a row, you need to be able to have a good time together. If you cannot go along with it, leave it. You can’t get rich with it, so it doesn’t make any sense. I can’t wait to hit the road, and this is something I hope we can keep for another 14 years.