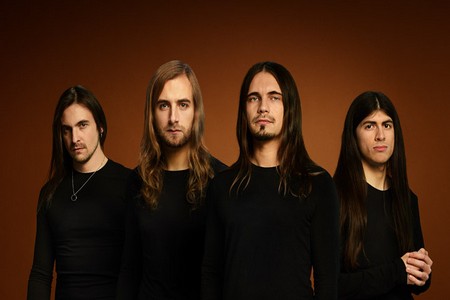 When it comes to the most interesting death metal out there, Obscura has to be one of the first names that is mentioned here in 2016. Their second album, Cosmogenesis, is what really burst them onto the scene back in 2009, complete with (anti)cosmic lyrics and concepts and fast and uber-technical playing. Omnivium seemed to seal the deal and furthered the progressive elements, with Obscura quickly becoming one of the go-to names of technical and progressive death metal. Then drummer Hannes Grossmann and guitarist Christian Münzner left the band in 2014, leaving some to wonder what would be next for Obscura.

Moving ahead to 2016, Obscura has released the follow-up to Omnivium, entitled Akroasis. Mainman Steffen Kummerer has forged ahead, with Akroasis being some of the band’s most diverse offerings to date. Plenty of classic Obscura flair, but the songwriting is tighter and more focused on the diversity (read: it’s not fast from beginning to end) – making it quite possibly their strongest album yet. We were lucky enough to be able to have a lengthy afternoon Skype chat with vocalist/guitarist Kummerer just prior to the release of Akroasis, and were given plenty of depth in regards to the changes post-Omnivium, the killer closing cut “Weltseele,” the band’s US visa issues, and much much more.

Dead Rhetoric: You were going to be coming over last summer for the Summer Slaughter festival but it was cancelled due to visa issues. Have any of the issues been worked out in terms of being able to come over here in the future?

Steffen Kummerer: Right now no one knows what is happening over at US Immigration. Even big bands…I read yesterday about Cradle of Filth having the same issues that we had. The Ocean also had to drop off of Intronaut’s tour as well. I don’t know what is going on, but something is definitely wrong, and I don’t know how we can solve that. We do everything by the books. I read all those comments like, “bands coming over don’t pay their taxes,” which is crap. When we are coming over to the United States, we have a crew of four people, we hire a bus company, we have a US merchandise company that prints everything, we are registered as a company – we pay our taxes and everything. We do everything by the books, we don’t try to sneak into the country through this or that border. After all that and then you get treated like this – the fact is that as of today, we can’t have our visas and we applied for them in March of last year – there is something completely wrong. We lost a lot of money and were close to being completely bankrupt.

In cancelling the tour, we lost 15,000 Euros (about 18,000 US dollars). In that time, no one made a single cent. Not our crew, not our agent, not the guys from Summer Slaughter or the promoters. In the end, we cancelled the tour 2 days before we were supposed to head out on the road. All of the fans were super pissed off, and I completely understand. I would react exactly the same way if my favorite band was cancelling a tour two days before I want to go to the show. It’s been extremely frustrating, but I never give up. We are still trying to get to the United States again, but it’s extremely difficult. I have not gotten a visa since 2012 – I don’t’ have a record or anything. This whole border problem also made me drop off of the Death – DTA Tour back in 2012, which was a huge bummer. I was really frustrated sitting and home and seeing all of the sold out concerts – it was extremely difficult. Our record label [Relapse] is in the United States, and we are very organized over there. It’s just a pity that we are not able to enter the country. It’s been one of those years, so to say…

Dead Rhetoric: That’s a ton of money to lose! How did you even begin to get any of that back?

Kummerer: We don’t live above our means. The economic situation within the band was always solid. We had our feet on the ground so that we didn’t make productions that we could not pay off. Somehow we have been able to bring the ship back on track. That has only happened because we have many friends and a reliable crew. The label people at Relapse and the merch companies we are working with, like JSR, helped us out here. Everybody was helping and it was one of those moments, when you are in a pool of shit – you know exactly who is your friend and who is not. I am very grateful for everyone who helped us out. It was a very bad situation and we are still suffering from it, but somehow we have been able to manage it without going completely bankrupt. We are not Metallica, which is pretty obvious, but we are doing solid tours. Everybody who has been on tour with a band, doesn’t matter if it is a van tour or nightliner tour, knows you are never going to get rich with it. If you are cancelling a tour that way and losing everything, it’s hard to get out of debt.

Dead Rhetoric: Moving towards the new album, there seemed to be an increase in the processed clean vocals. Was that something you wanted to purposely explore more this time around?

Kummerer: That’s actually a good question. Those vocoder vocals we used in the previous two records as well, but not as obviously. The reason why it is more present this time is that we took more time for a proper pre-production. Before we recorded the album, we went through all of the vocal arrangements, and especially the vocoder ones. We composed it out, so that it was not only an effect on the vocals, but all of those vocoder vocals have been arranged, like the way you arrange a string orchestra. It was done on purpose to get a different musical color – not only those death metal grunts and screams and everything, but also adding a different dimension. I think the vocoder gives it an extremely futuristic sound. It fits the music very well, especially within some choruses. I used the vocoder to put it under the regular metal vocals, like in “Sermon of the Seven Suns” and it gives it an almost Fear Factory or Hypocrisy vibe. It gives the music another dimension and we have more options to arrange the vocals overall. The idea was basically to have the vocals a little more interesting than the past arrangements. The vocalist should get along with the music more, not just having a guy screaming into the microphone.

Dead Rhetoric: Was there anything else that you felt that you tried to expand upon with Akroasis, as opposed to your previous albums?

Kummerer: There were a couple of things. Let’s start with the production. Every artist, everyone who plays in a band perhaps, listens to the last record and looks at what they wanted to change. The same thing happened to me with Omnivium. What we should have improved was the drum sound. I wanted to change it a little bit. It was sounding a little too flat. We had a fantastic drummer playing to the limit, and giving a great performance. But the sound was lacking a bit from my perspective. So what we did was get a different view to produce Akroasis. I had more of a late ‘90s rock production in mind. Like Porcupine Tree or even Soundgarden. So we purposely went to record the drums in a different studio in Munich. It’s called Dreamsound Studios. They have a very big recording room for orchestras and jazz bands that want to record as a whole band. We only had a drum boot, so the drums fit in there but you could not use the room acoustics. We had a certain idea about how to get all of this into the drums sound, but the interesting fact is that you don’t need the room mics for producing high-speed parts. It’s not necessary, it actually makes the mix muddy. But when you are getting into silent parts, like cymbal play-alongs or one of those acoustic interludes, where the drums aren’t playing blastbeats – if you put it there, then the sun is shining. Everything sounds a bit more broad and bright in the end.

The same goes with the guitars. We had a couple of more dimensions in producing the guitars themselves. We only used analog equipment for the whole album, which is not very common for tech death bands. Usually they prefer the super-clean sound – everything is in the grid. That’s not what I like. I wanted it to have a more organic sound. We only used two amplifiers, and only our live set. The seven string I use on most of the shows is the guitar I used to record the album with. We also used the same amp we use live. It’s the same guitar used to record Omnivium and Cosmogenesis. It’s our live sound, so that’s what I wanted to bring into the studio. It was a different approach, but it felt quite natural. I know some of the tech nerds say that it sounds a little bit flat or it doesn’t sound loud enough. But it’s what we wanted to do. We have a different perspective on the production nowadays. You grow as a musician. When we started as a band, with our first demo, we didn’t know what to do. Now we have more experience and we have worked with the same producer for like 14 years now. You know how it works and you pick up little pieces that you want to do better.

In terms of songwriting, we wanted Akroasis to be more diverse. With Omnivium, it was in your face. There was so much happening at one time. My impression listening to the album as a whole, was that it was too much. After a half-hour, the listener is getting tired. There’s no space to breathe. It’s not all high-speed – “Ocean Gateways” was super-slow and crawling and Morbid Angel-like. It was the most brutal song on the album from my perspective. This was the song where everyone had a moment to breathe. This was the idea behind the different tempos of Akroasis. We have fast songs, like “Sermon of the Seven Suns” and “Fractal Dimensions” but on the other hand, you have songs with some silent parts, and mid-tempo sections like “Ode to the Sun,” and you have some super groove and a couple of acoustic interludes. What I wanted to do was write an album from start to finish that can be seen as one big piece – it’s not getting boring. There are some moments of rest, but the next blastbeat will cut off your head. Listening to the master of the new album, I’m happy how it turned out. It’s a good album, and it sounds a bit different than the previous albums but overall it sounds like the band still.