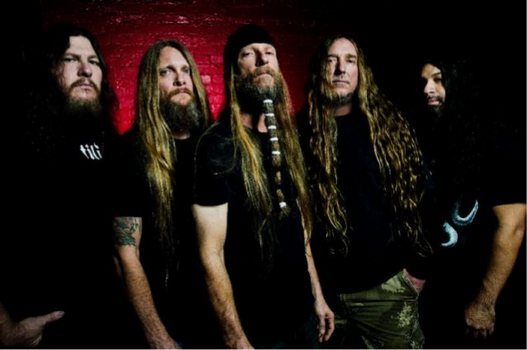 Dead Rhetoric: That would be pretty awesome – I’m in New York and can get Cigar City beers up here.

Tardy: Yeah – they are a young brewery and they are selling every drop that they can physically get their hands on. They are machines right now, but they are looking at growing [further] and their reach is getting bigger and they have a pretty good name. So with that said, I hope we can come up with a cool flavor and concept and do another beer that is maybe a little more available than the 3Floyds one was.

Dead Rhetoric: Do you think Obituary stands out even more today in the field of death metal, regardless of being pioneers and legends, because the emphasis is on groove, not speed or being over the top technical?

Tardy: Maybe – that fast, blasting death metal is not super-my style either which is obvious given what we play. There’s nothing wrong with going fast, you know that, but I think that going fast and slowing it way down – all that meaty stuff between, all that groove stuff in between that can really get a crowd going – I think that’s one of the things that sets Obituary apart a little bit. We are pretty steady with what we do. We have been the same type of people in the same kind of music for a long time. Sometimes it takes that amount of time for people to really do that. It’s been great to see people that saw us 25 years ago, and introduce us to their son or friend and say, they like you too. I think we are bridging that generation gap a little bit and that’s kind of a good thing to see also.

Dead Rhetoric: What do you do to keep your voice during a tour – has it gotten tougher over the years?

Tardy: I’ve been really lucky over the years. So far, so good. I’ve learned that preparation before the tour – that slow work up before the tour, getting into it before we start the tour, is the first time that I am singing as hard or much as I sing – I do a nice ease up to that. When you are on the road, you go out and sing the songs and then you pretty much shut it down. You have to get away from people and you can’t talk as much, you want to rest it as much as you can. You learn tricks here and there about how to do it – so far so good, it’s been holding up pretty well for me.

Dead Rhetoric: Does that get tricky with trying to talk as little as possible with people that are undoubtedly trying to come up and talk to you and say hello and all that?

Tardy: Yeah, it does – there’s a lot of those times after the show that the guys go down to the bar and are hanging out and drinking, and that’s where I want to be too but when we have say, 28 shows in 31 days, I know when to say when. I have to shut it down – it’s better for me to get quiet and go and rest when we are on the road. Even interviews – I won’t sit and do interviews all day long – not because I don’t want to do them, I just physically know when to say when and just sit there and be quiet. Most people realize that when they come talk to me and we are hanging out. It’s just what I have to do in the course of a long run. If we are just doing a few shows or festivals it’s no big deal.

Dead Rhetoric: What’s it been like to work alongside your brother every step of the way with this band?

Tardy: Man, its great having a brother in the band. We get along with each other. We have the studio over here at my house so he is here almost every day. Sometimes doing nothing, sometimes hanging out, or he’s up playing his drums. Sometimes we poke at some Tardy Brothers music that we work on. When we head out on the road we are always the ones to share a room – we just kind of do things together and we are really close. It’s been awesome to have a brother in the band.

Dead Rhetoric: You mentioned the Tardy Brothers stuff – is there the possibility that you’ll ever release another album?

Tardy: There is – we are always kind of messing around and poking at different things. But we’ve been so busy that to sit down and focus on it, we just don’t have the time. We put together the first Florida Metalfest last year and that took up a lot of our time and it seems like there’s always something else coming up. We are always poking at it when we get a few minutes here and there. We are sitting on it. We hope to do another release at some point in time; that was fun. Especially with being able to meet more and more cool musicians that we want to record with. That’s always our intent – to snag a person here to do a solo or a person to help with something else to mix it up, it gives us something fun to do.

Dead Rhetoric: As involved as you have been with the genre over your life, what makes a death metal lifer?

Tardy: I don’t know, there probably has to be something a little bit wrong with you [laughs]. It’s awesome – I’m probably going to make up some of these numbers, but I’m willing to bet that metal fans, like Obituary fans, will buy more vinyl and more CDs than any other fanbase in percentage of their sales, as opposed to digital. Metal fans love to get their hands on stuff. They like to support and like to go out and do that; percentage-wise I really think they do that more than other types of music do. It’s cool – I have lots of friends of mine that don’t listen to this kind of music. I always tell them, that I can remember that there was a fight at one of our shows. I just can’t remember it. They might think – they hear the music and see what the fans look like or see the moshpit and say, “oh man.” But I honestly cannot tell you the last time I saw an actual fight at one of our shows. Because that’s not the nature of metal fans. It’s so much the opposite of what they actually are – they are very cool and laid back, they love to get into the music yes, but that’s it. Show up and have a good time. It’s a fun crowd to be around, that’s for sure.

Dead Rhetoric: As a band that has changed labels several times and crowdfunded, how do you feel the industry has changed since your beginnings?

Tardy: Man, that’s a tough one. Everything has changed so much. Bands have to tour a whole hell of a lot more than they used to, because they don’t sell nearly what they used to. That completely transforms what the record label wants to do for you. We got real fortunate with the crowdfunding thing and trying to do the album on our own. We figured out real quick that distribution is not something that you can do on your own. It’s not going to happen. You can’t show up with an album in the back of your car and go to someone and say, “Can you get these out for us?” They are going to shut the door and say they don’t know what you are talking about. They like cataloging music, and there’s a sorts of deals, and it’s a complicated thing.

When we met the Relapse guys, they were just cool. They said, “Hey look, whatever you guys want, we are here for you. We love you guys and we’ll work with you in any way that you [want].” What the Kickstarter thing allowed us to do was to maintain complete ownership and control of the music and everything we do. Relapse just allows us to use their distribution machine, and because they are all so cool and we get along so well with them, they help us with the marketing. That’s the other big thing. You could do it [marketing] but it would take up so much of your time. It’s near impossible – you could do it, but the distribution was impossible.

Dead Rhetoric: You have the Decibel tour coming up soon, anything else in the pipeline for the spring/summer?

Tardy: We have a lot! We are booking into next year already. The first thing is the Decibel tour. We are trying to do a B-market run…some of the cities that we don’t hit with the main [Decibel] run. So that’s some more shows, probably up the east coast. One of the guys from Madball called me up and wants me to play his hardcore festival, which is a funny conversation, because I had the same one with him about our metal festival. He’s like, “you want us to play your metal festival?” And we said, “fuck yeah we love you man. Kids are going to love it.” So he called us up and said he wanted us to play their hardcore festival. And he said, “Trust me, all these hardcore fans love Obituary.” So we’ve got a little b-run that we’ll be doing after the Kreator thing, and hopefully the Madball thing can get set up. But we have a whole bunch of festivals over in Europe all summer, and then a European tour planned for the first of the year too.