Now You Know: Winds of Genocide 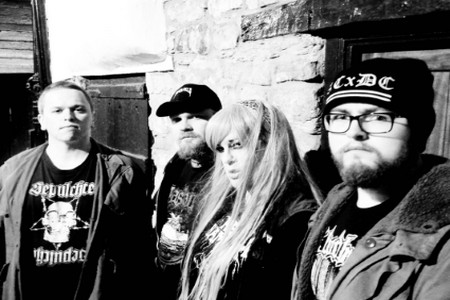 Usually the “Now You Know” segments read more like an article, but occasionally when we get some strong feedback from a particular band we keep them intact. Vocalist Kat Gillham was kind enough to give us some rather detailed answers, so check out what she has to say about the band’s history, being a transgendered woman in metal, as well as her frequent involvement in the scene…

Dead Rhetoric: How would you describe the sound of Winds of Genocide?

Dead Rhetoric: Who are a few of the band’s biggest musical influences?

Dead Rhetoric: Being equally rooted in death/black and punk/crust, do you feel the band has some crossover potential?

Gillham: Yes most definitely, I think we have A LOT of crossover potential. When we first started the band we wanted to have a big crossover appeal and appeal to both the crust/punk crowd and the death/black metalheads in equal measure and I think we have achieved that since the beginning as the death/black metal influences were already rearing their ugly heads and showing in our music on the first EP The Arrival Of Apokalyptic Armageddon. The main intention when we decided on what direction we wanted the band to go in musically/lyrically/vocally was to have a huge crossover appeal by mixing up furious aggressive raw crust/punk with old school death metal with some old style punky black/thrash metal here and there thrown into the mix for good measure.

Gillham: I had been doing a couple features on some Pulverised bands for the Terrorizer Magazine website during 2011 and was already in contact with Roy Yeo, the label manager, because of that so one day I figured I would send him a copy of our debut EP via MP3s. He really liked what he heard, he liked our style and approach and said he was interested in signing us and so made us an offer that we couldn’t refuse and thus gratefully accepted! I am personally a big fan of a lot of the bands and albums on the label’s roster both past and present and have followed the label’s activities for a long time before we got signed to them and have followed the label since as far back as the mid 90’s (I remember my friend getting hold of the first ever Pulverised released back in the mid 90’s, an EP titled Sorrow Throughout The Nine Worlds by a band from Stockholm called Amon Amarth!). It was totally out of the blue getting signed to them but it made sense to take that next step and progress to doing a full length album.

Dead Rhetoric: Usurping the Throne of Disease is your first full-length album after a few splits/EPs/demos. Did the writing process change at all for a longer release?

Gillham: We spent much more time writing and honing/refining the material for the album that’s for sure, over a period of 3 years we crafted the material for this album and also even dropped some material we had written for it, including one whole song and most of another song (except one riff we kept) as we felt that material wasn’t good enough so we wrote some other material in its place which I feel is MUCH better and stronger. We were very conscious that we had to step things up a gear and wrote songs that we felt were deserving to be on a full length album. We only re-recorded one old song “Into The Darkness Of Eternal Nuclear Winter” which was originally written for and appeared on the split with Abigail.

Dead Rhetoric: Mark Riddick has provided a number of killer covers over the years, how’d you decide to use him for Usurping the Throne of Disease?

Gillham: I have been a huge fan of his work for a quite a while and when the label asked who we should use for the album cover he was at the top of my list. I contacted him, asked if he was interested and for a quote. He got back to me very enthusiastically and with a very reasonable quote so that was it, decided straight away! I told to him to basically just try to fit some art around the album title and he translated the title perfectly into art form. It is a VERY striking, sick and diseased piece of artwork!

Dead Rhetoric: Looking back at some interviews over the last few years, it seems that Usurping the Throne of Disease was meant to be released much sooner. Was there any reason for the delay?

Gillham: There have been a couple delays for various reasons. When the contract was signed/album deal agreed on we had just finished writing the material which was committed to the split with Abigail and were due to hit the studio to do that recording. That was in October 2011. Linus our drummer on the first 2 recordings had to leave the band in December 2011 because he had to move away, so we had to start writing the album material from scratch in early 2012. We continued to write throughout 2012 with a new drummer but in early 2013 we had a few issues with him so he quite the band and we once again had to find a new drummer, which fortunately happened very quickly, that drummer is Ian Hunter who plays on the album.

We were originally booked into Gutterview Studio in Stockholm with Fred Estby for late August 2013 but after we had lost Matt, our old drummer, in April of that year it was gonna be impossible to get everything rehearsed with the new drummer as well as finished in time for August so we postponed the recording which was a blessing in disguise as to be honest we were not really ready with the material and some of that material didn’t make it onto the album in the end. We wrote another 4 songs with Ian behind the kit all of which are on the album! We rescheduled to record with Fred in August of last year but there was some last minute problems so once again we had to postpone and we ended up doing the music tracking at a studio in Nottingham, England and then a month later in September last year I went over to Stockholm and did the vocal tracking and helped oversee the start of the mixing process with Fred as planned. So there’s been a few very valid and frustrating reasons for the delay.

Dead Rhetoric: Being one of the few openly transgender women in the extreme scene, do you see yourself in a bit of a spokesperson role?

Gillham: Not sure if I would call myself a spokesperson, I guess I am in a way though as I am in a band with a now decent/sizeable following and have been given a platform to openly speak about my being a transgender woman in the extreme music scene. I like to think that I can at least help give some other transgendered people into extreme music who may not be already out or who are maybe nervous about starting bands post transition the courage and inspiration to come out themselves and form bands of their own by being out there in the public spotlight like myself making music, recording/releasing albums and fronting bands and being the spokesperson for those bands. I think people like myself and Marissa Martinez-Hoadley from Cretin are definitely helping to raise the issue more about transgendered people in the extreme scene and are helping to lead the way for others by being in bands by being signed to well-known extreme music labels.

Dead Rhetoric: Has being open about being transgender helped/hurt the band at all?

Gillham: My being open about being transgender has definitely not hurt the band, I remember when I first came out in 2002 I had people saying I wouldn’t be taken seriously because I am trans and that I couldn’t make heavy music as a transwoman well I guess those people will be eating their words now as I have proved that you can be taken seriously and gain acceptance in the extreme music scene as a transgendered woman. I have had some prejudice but that isn’t surprising as you find narrow minded people and bigots in all walks and from all backgrounds of life and society, the extreme music scene is no exception. But it is those kind of people I wanted to/want to raise a big middle finger to by forming bands post transition and making music again as my true self and not hiding away like I did for a few years post transition where I didn’t go to hardly any gigs for a few years and was often sat in a room wondering if I would ever play in a band again and dreaming of fronting a band as a female in my own right. But I was always determined to make that happen at some point and I am really glad I persevered, chased that dream and formed new bands living as a female. I really couldn’t imagine not being in bands over the past 6 years or so.

Dead Rhetoric: You’ve been a part of the scene in several bands over the last twenty years; what’s your take on how things have changed over time?

Gillham: Well there is definitely a lot more bands around these days that’s for sure. It is easier to get yourself heard because of social media than it was 20+ years ago when the main forms of communication was snail mail and telephone and the main ways to get bands noticed was via playing live, flyers, fanzines/magazines etc..it was definitely much tougher back in say the early-mid 90’s to get your band noticed and heard by people. The internet and social media has definitely helped bands both new and old to get their music heard by more people which is definitely a good thing but now it is much harder to find really interesting bands amongst so many mediocre sounding bands. I get sent a lot of new music digitally due to my writing for Terrorizer and sometimes I will only hear 1 band out of 10 promos that really interests me and makes me think “Wow, this is really fucking good”. There are things I miss about the old pre internet days and there are things I love about the modern era and what the internet has done in terms of helping to make it much easier and quicker to promote bands/music.

Dead Rhetoric: You have your own blog and have written for Terrorizer. Is it safe to say that metal encompasses most of your daily life in some way?

Gillham: Yes, there is rarely a day that goes by that I am not listening to music or reading about it. Metal is a HUGE part of my life, has been for over 20 years and it will be until I am in my grave. I really couldn’t imagine my life being any other way, music is such an integral and important daily aspect of it and I dare say revolves around it in so many ways.

The blog has been lying dormant for over a year due to lack of PC at home but I have been very active with my writing for the Terrorizer Magazine website. I love writing about music as well as listening to it.

Dead Rhetoric: What’s next for Winds of Genocide?

Gillham: The album will be released on the 26th of January and we’ll follow that up with some live shows and also start writing some new material for whatever release may come next….what that will be is uncertain, time will tell….