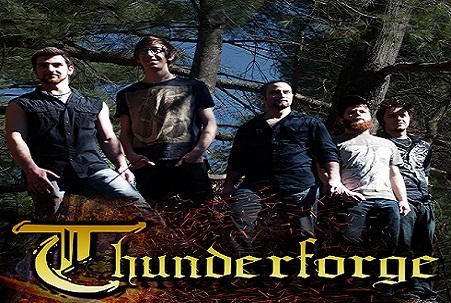 I’ve been hearing a lot about this Western Massachusetts power metal band through my friends in my local scene, and after taking in this recently captured live performance from Maximum Capacity nightclub online from their Facebook page, I knew I had to see this band in person. Thunderforge are the real deal live. Energetic, fun, entertaining, and musically accomplished on all fronts. They will be going places because of their genuine love and respect for the genre at hand.

Currently in the process of recording a self-financed, self-released EP, I felt it was necessary to expose this quintet’s style to a wider audience. Firing off a few questions to their friendly bassist John McLaughlin, he quickly sent me back answers, so good that I felt rather than making this a narrative article, it would be best to leave his thoughts as is…

Dead Rhetoric: Tell us about the formation of Thunderforge: what year did you start, how did you know each other and how long did it take before writing your first set of original songs? And was it an easy or difficult process to come up with the band name?

John McLaughlin: Thunderforge was officially started in 2012, but the initial idea for it started about a year before that. Adam, Christian, myself, our original drummer Sam, and another friend of ours jammed on a Dragonforce cover for a work-related event, and then the following summer we recruited Jules and turned it into an actual band. Christian already had some songs written (“Hold On” and “Into the Fire” being two of them) and Jules added some not long after. We started playing live in the summer of 2013 after a drummer change, and it’s pretty much progressed from there. The band name came pretty easily. We struggled a little initially and were throwing around variations on “Thunder(blank)” and I think it was Christian who came up with “Thunderforge,” which we stuck with because we figured “forging thunder” – aiming for driving intensity instead of ridiculous cheesiness – described our sound fairly well. Which is pretty cheesy, but we’re dealing with a genre with bands called Fairyland and Elvenking, so it’s probably not a problem.

Dead Rhetoric: How does it feel to play a brand of progressive oriented power metal in an area of western Massachusetts that seems to be more well-known for metal-core/ groove metal or djent oriented heavy acts?

McLaughlin: It’s actually not as hard as you think. We’ve often been the stuck-out sore thumb on some of the shows we’ve played, but we’ve played with everything from metalcore to funeral doom and I can’t say we’ve ever had a bad crowd response. Sometimes the crowds are small, but that’s hardly unique for a local band. And we’re buddies with Tides of Time, who are making sure we’re not alone on the prog/power front in the area. I think with the metalcore crowd, all of the kids who go to those shows have some respect for classic metal acts like Maiden and Priest, and while I wouldn’t call us an old-school band, there’s definitely a strain of that sound in Thunderforge and I think the metalcore fans can latch onto that. There are definitely places where the fans aren’t as open-minded (I knew a drummer in a metalcore band that was booed off stage once in New Hampshire for being “too metal”), but Western Mass has shown itself to be pretty accepting.

Dead Rhetoric: Based on your live act, it seems like as a quintet you enjoy having a good time from the stage while being a little comical and theatrical – what are your feelings on Thunderforge as a live act, and what do you hope the audience takes away from your performances?

McLaughlin: We’re just all really goofy people, and we make no effort to hide it on stage. We take the musical aspects and songwriting very seriously, but the shameless insanity is part of who we are and we just let it happen. Ever see a band that doesn’t enjoy themselves on stage? It sucks! We’d rather tell jokes and act like idiots and blow war horns and stuff. At the end of the day we’re in it to have fun, and if you take yourself too seriously in this business it becomes a drag. So we try to make it fun and loose for ourselves, and we hope that translates to the audience as well.

Dead Rhetoric: You are currently working on an EP release. How are the studio sessions going for this, and what are your expectations regarding promotion/ sales for the band? Will this exclusively be a digital release or do you have plans to make it available in physical formats like vinyl or CD?

McLaughlin: Things are a bit stalled right now due to outside factors, but they should be picking back up soon. Jules has been doing the recording basically entirely out of his bedroom (barring the drums which were recorded in Zac’s basement), and he was recently contracted to record another project that’s taken a bit longer than expected, but it should be finished shortly at which point we’ll resume recording guitars and bass. We’re planning to do a CD release, and it will also be available digitally through both Bandcamp and Loudr. Loudr also handles licensing and stuff to get music onto iTunes/Amazon/Spotify/etc., though we haven’t made any final decisions about where the EP will actually be available yet.

Dead Rhetoric: What are the short term and long term goals that Thunderforge has over the next few months to a few years? Will you be expanding your live performance horizons to other states/ territories?

McLaughlin: We have a long string of shows coming up this summer that are taking us to some new places. We’ll be playing at the iconic Cherry Street Station in Wallingford, CT in July, and we’ll also be getting out to eastern Connecticut and New Hampshire for the first time as well. The big one this summer, though, is definitely RPM Fest in Greenfield, MA August 9-10. John Gulow from Promotorhead Entertainment has been putting in a ton of work to get it off the ground, and just based on the lineup so far it’s going to be a killer show – but anyone who’s been to or played at any of his shows won’t be surprised by that, since he consistently books killer bands all the time.

The other major short-term goal, obviously, is the EP release, and also getting some other merch out there, since people have been begging us for shirts for a while. Longer-term goals basically just amount to expanding our reach, playing places we haven’t played, getting a full-length album done, maybe finding label representation if the right one shows interest in us – all pretty typical goals for a local band, I’d say. No idea if we’ll reach them, but two years ago I don’t think any of us envisioned the band being where it is now, so we like our chances! 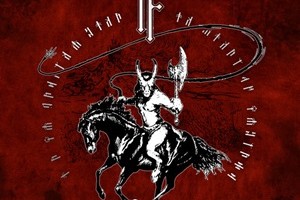