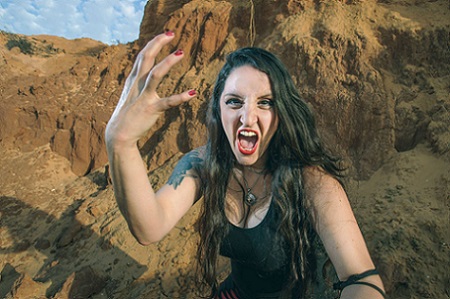 Possibly, but not 100% confirmed the first band of their type out of Israel, Shiran is the namesake project of vocalist Shiran Avayou, she of the X-chromosome. The sample size out of her home country is so small that naming another female-fronted metal band made DR come up empty. For once. Yet, Shiran, in spite of occasionally teetering too close to the visuals-first end of the spectrum, have something of value on their hands with the Warm Winter Day EP, which the band released themselves.

“The first challenge we face will be the fact that we are from Israel,” says Avayou. “Israel is a very small country with a very small metal scene so exposure is not easy to get from here. Being a female fronted band is very unique around here so people are intrigued, reviews can be harsh and automatically compared to other female fronted bands even though we have nothing else in common with those bands. That just means we still have a lot to prove to the world.”

Warm Winter Day is the band’s first recording foray, a five-song EP that puts Avayou’s vocals front and center. According to the vocalist, the EP (and more importantly, the band) is the first time she’s been able to find the proper platform for her voice. “In my first metal band it was very difficult to place my voice on the music mostly because it was thrash metal,” she says. “In this project it is very natural because this is our own style, my lyrics, my melodies so I feel right at home. I am very connected to the melodic side of the project, writing the melodies are as personal and meaningful to me as writing words. I am very country in my writing and this is my favorite style, country melodies with the fierceness of metal.”

Come first quarter of 2015, Shiran plans on shopping Warm Winter Day to prospective labels, and, arranging live shows. Avayou is joined on the live front by fellow Israeli metallers Ferium as her backing band, giving Shrian a familiar presentation. However, Avayou says don’t be fooled by their setup: It’s all about the music in the end.

“I admit that being a woman is attracting attention but I don’t think it stops people from listening to the music and evaluating it as it is. Therefore, we don’t do a thing different, just present the music to the listener.”