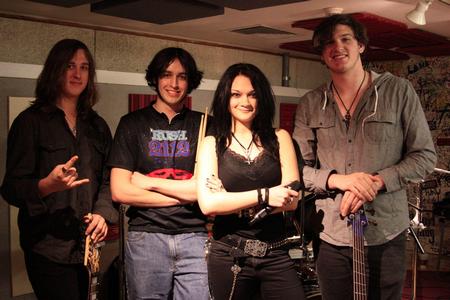 Delivering a brand of heavy symphonic-oriented power metal most associated in circles of Kamelot meets Epica with a splash of extreme orchestration and vocal nuances, Boston’s Seven Spires are another impressive young band ready to make their mark not only on the New England scene, but beyond. Dynamic songwriting, attention to detail, and the professional, versatile voice of Adrienne Cowan will turn many heads based on their debut EP as well as their impressive live performances.

Firing off these questions to Adrienne, you will sense that the buzz about the quartet is brewing – much like their penchant for coffee (view some of her video blogs for more insights on You Tube. Take it away Adrienne!

Dead Rhetoric: Can you tell us how Seven Spires came together (what year you formed, previous experience in the music scene, how the band name came to be) – as you all have connections to music colleges you are currently attending? And at what point did you switch out bassists as JP Goldman appears on the debut EP but you have a new bassist in Cameron Tidman?

Adrienne Cowan: Seven Spires originated as a rock/metal opera I was writing over the summer of ’13 when I moved to Boston, MA from Guildford, England. A full ride scholarship to study at Berklee College of Music wasn’t an offer I could turn down, but it wasn’t an easy move either as Southern England had been my home for the good part of 6 years. The Cabaret of Dreams was sort of a world I could escape to, and so the EP came to be.

This lineup was solidified in April ’14 when we parted ways on friendly terms with JP Goldman over creative differences. Cam Tidman (graduate of UMass Lowell) joined us shortly after as a recommendation from Anthony. Anthony showed up in December when I saw him perform at Berklee’s end of semester Metal Ensemble recital. As for Jack, he’s been around since day one really. We met in a bookstore during my first week at Berklee, when he was already in his fourth semester. Def Leppard was on the radio and I was wearing a Nightwish shirt from theImaginaerum tour… We got talking and everything pretty much fell into place from there.

As far as previous experience in the music scene goes, Anthony and Cam have been hitting the stage for about 11 years around MA and the New England area, primarily in their old thrash band Zero Point. Jack has done everything from solo shred guitar shows in SC/GA to disco tribute bands, 60s rock, and jazz/fusion ensembles, as well as being accepted into Berklee at the age of 15. I spent my years in England fronting hard rock/sleaze metal acts Riot Underground and Hollywood Trash, while working on my metal vocal chops on the side in an extracurricular Metal Workshop led by Nic Meir at the music school I was attending at the time.

Dead Rhetoric: The name Seven Spires doesn’t really have any special significance, we just wanted something that would be genre appropriate without sounding too frilly. How long did it take from songwriting ideas/conception to actually recording, mixing and mastering for your debut EP “The Cabaret of Dreams”? And how were you able to get renowned behind the scenes people like Sascha Paeth and Miro involved in the mixing and mastering of this?

Cowan: From songwriting to holding a finished copy of the EP in our hands, the process took just over a year. Having Sascha Paeth and Miro work on the tracks had always been on my wish list for the EP as they’d worked on so many of my favorite albums. Literally all I did was contact them via the email on the Gate Studios website and send them my demos. Sometimes you just have to ask and hope for the best!

Dead Rhetoric: You play a form of symphonic metal that incorporates a diverse sound, sometimes power metal and occasionally darker/heavier in almost a death/black way. How would you describe your sound to the average listener – and do you think your versatility as far as songwriting and dynamics is an asset to help Seven Spires stick out?

Cowan: We tend to go with the description of “Symphonic metal, somewhere between Kamelot and Dimmu Borgir”. I would say having some variety between songs definitely helps us stick out, at least, I know I always enjoy an album that has a nice dynamic flow to it.

Dead Rhetoric: Has your seasoning in bands overseas in the UK been beneficial to your outlook and output with Seven Spires? How long have you been singing and what do you think are some of your greatest abilities in terms of singing and performance?

Cowan: My time overseas has definitely been beneficial to Spires. We’ve always done everything DIY and the years of running bands in the local grind has taught me useful lessons on what works and what doesn’t, both within the band and in the bigger picture within the scene.

I’ve been singing for as long as I can remember, though I started lessons when I was 12, and went on to study different classical singing techniques, Speech Level Singing and formulating my own technique based on my personal needs as a vocalist. I try to work most on strengthening the weak links in my performance, whether it’s the actual stage presence, clean vocals, or extreme vocals, so I can have the competence to deliver whatever a song would require of me. But, I think my strengths as a performing vocalist lie in putting on a show and working those “money notes”—those high gritty screams all the 80s rock and metal guys do.

Dead Rhetoric: You’ve already begun work on a follow up EP, and I’ve heard through some of your social media discussions that it’s a little bit heavier than “The Cabaret of Dreams”. Was it difficult to decide which selections went on the first product in comparison to the second, and can you tell us about some of the obstacles you faced either in terms of recording or writer’s block?

Cowan: It was a bit difficult choosing songs for both releases, yes. When putting an EP or album together there’s song flow, “singles”, and the attention of the listener to consider, plus with a concept and story to follow it’s important to get the right song for the right scene in the story. As the story gets darker and more intense in the second half (which will be the second release), the music needed to reflect the turmoil the characters would be experiencing, and the cathartic releases that would follow the conflict. The trouble I ran into was partially due to my songwriting abilities—I felt my orchestration skills wouldn’t do the songs justice. Also, some of the songs themselves sometimes didn’t feel strong enough on their own. We want the songs to be able to stand alone as tunes outside of the concept of the Cabaret of Dreams. I’ve probably written the second release at least three times haha.

Dead Rhetoric: What is your philosophy when it comes to Seven Spires in a live show setting? Do you feel like it’s going to be an uphill climb appealing to Boston/New England audiences in a genre that is probably more well-known (and appreciated) overseas in comparison to here?

Cowan: You know, I did think it was going to be an uphill slog through metal fans who didn’t have an interest in power/symphonic metal, but that has proved to not be the case. Of course, we had hoped for the best, but the reception we’ve met so far has more than exceeded our expectations. Everyone at every show we’ve been on has been great and we’ve made some fantastic friends here so far.

It’s really awesome to see that the niche community of metal fans who appreciate the frillier, more theatrical side of metal extends to New England. The scene here is so rich with talent and great people, on stage, behind the scenes and in the crowd.

Our live show is just us giving as much of ourselves as possible to the show and to everyone there with us. We aim to give the best performance we can every night; to be a spectacle and to be a vehicle to transport anyone watching to a place away from the drag of everyday. I’m very escapist about music, I like to write songs that take the listener to another place, and I try to carry that over to our live experience.

Dead Rhetoric: Do you feel that females are gaining more acceptance as musicians in the metal genre today, or do you feel that there are still walls that need to be broken down?

Cowan: I would say yes, we are gaining some acceptance as musicians in metal. We have people like Alissa and Floor at the tip of peoples’ tongues, Kobra Paige too, and I really like and look up to those three specifically. They carry so much strength, especially with Floor to a sonically softer band like Nightwish.

As someone who has studied operatic techniques, I think that female vocalists who employ a much gentler and traditionally “beautiful” singing technique are wonderful and I very much appreciate their art; I’m talking about people like Simone Simmons and Tarja Turnen here. However, I think it’s fantastic that we’re starting to see female role models that show us that we don’t need to sing the delicate flower soprano parts, and then step back and let the boys have all the brutal fun.

Perhaps there are still walls to be broken down, but we are definitely starting to gain more acceptance as musicians, and not just as “Tits in a Corset”.

Dead Rhetoric: Are there short term and long range plans for Seven Spires say over the course of the next year or two? Where would you ultimately like to take the band if you had an unlimited budget and time on your hands?

Cowan: Absolutely — we’re working on our next release of course, which is going to be the complete full length of the Cabaret of Dreams concept. Lots of shows on the horizon, and working to build our touring radius.

An unlimited budget and time would mean a live orchestra and choir for our recordings, an enormous stage show probably (I like smoke and fire and things to climb on), a greater variety of merch, make a video for every song to provide more visual for telling the story… Probably get on a plane and do some UK shows, I do miss playing over there.
Essentially, I’d like to take the band as far as it can go, in as big and bombastic and theatrical a way as we can manage. It’s all about the show and the story, in my opinion, whatever will give the audience the best and most entertaining listening, viewing and live show experience.