It’s generally not a good idea to judge a band based on who they cover. The whimsical nature of such an endeavor can certainly be misleading, but ‘tis not the case with up-and-coming doom crew Northern Crown, who saw fit to cover Candlemass’s enduring “Crystal Ball” on their 2014 In the Hands of the Betrayer EP. It was an instant acknowledgement the band had their (doom) hearts in the right place, something that is reflected even more so on their full-length debut, The Others. The album is a collection of song-oriented, well-arranged, sometimes epic, but ever-unwavering doom nods, many of which highlight the sterling vocal approach of Frank Serafine. With such an array of tried-and-true songs on display, it’s no surprise doom itself goes pretty deep for the guys.

“That’s a great question, we could write an entire essay about this,” answers Randall. “Firstly, as a musician, doom is synonymous with metal. Black Sabbath is my favorite band, so I associate doom with the origins of the genre. Philosophically speaking, doom is much more introspective than other forms of metal. It focuses more on isolation and alienation. Hopelessness is also a big part of it as well. We can all get trapped in our mind with that hopelessness and that’s what the first two albums are about, the human condition.”

The benefit of proximity that saw Randall and Serafine in the same state for the first time gave the tunes on The Others a boost. Of note should be “Surreality,” employs the savvy use of an organ, making it the album’s bonafide standout track. “I’m a huge fan of Deep Purple and Uriah Heep,” admits Randall. “I’m fairly obsessed with 70s rock. Once Opeth and Candlemass starting integrating organ into their sound, that really convinced me it had a place in modern metal.”

Northern Crown’s experimental side is on full display with “No One Came to Mourn Me,” a psychedelic, trippy number that wouldn’t be out of place on any one of Sabbath’s mid-70s gems. “The lyrics came first, which is a bit of a rarity for us,” says Randall. “It just didn’t seem like a guitar song. We began experimenting with some analog synth sounds and once Frank tracked his vocals and solo on the demo, we all felt very strongly about it.”

Being that all four members of Northern Crown have yet to even be in the same room together makes The Others that much more of an accomplishment. It’s no wonder Randall and co. are hoping to pull together some live dates.

“When we do start playing live, I think we’ll take what we can to get our live show together, but as we all are quite busy with our careers, we’re going to have to pick our spots. We need to get a live lineup in order, so we can bring the doom to the masses. We also MAY have a couple surprise tracks for everyone early next year.” 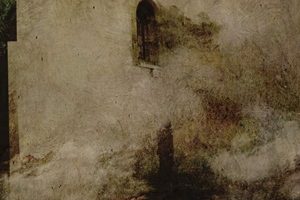