Now You Know: My Missing Half 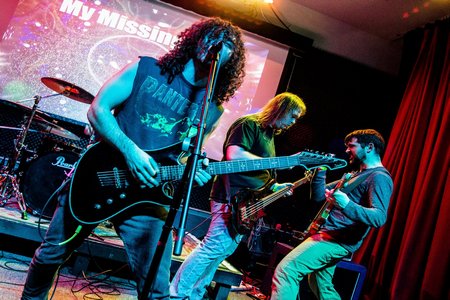 The best band names in metal occur often out of an unpleasant set of circumstances. Take the Boston, MA melodic death metal act My Missing Half – which started from the primitive ideas out of vocalist/guitarist Bijan Hennessey, as he explains the transformation through this growing pains period. “I had a few demos put together. One of them was for our song “Finding Reason”. The demos we’re VERY rough and had really fake sounding programmed drums. I showed the songs to my friends and they said that they liked the songs, but the drums and guitar tone were so awful that half of the song was missing. That’s where the band name came from.”

Naturally assembling the right members took a little time, but Bijan preserved, using the power of the internet to create the current My Missing Half lineup. “Up until last year, we’ve had a revolving door of band members,” Bijan explains. “I’m not sure if the My Missing Half you saw the other night in Peterborough, NH still counts as the same band. We’re a completely new lineup with a different sound. Everyone who is in the band now was found on the internet through a few sketchy websites.”

“I joined the band in March of 2012,” drummer John Matthews says. “After moving back to Boston from LA. I had been on the hunt for dedicated musicians, and I got desperate enough to look on Craigslist at the same time that Bijan got desperate enough to post on Craigslist. I came in for an audition and it was love at first sight.” A year later, bassist Alex Elwell came into the My Missing Half fold. “I joined up in 2013 after my previous band broke up. Bijan was posting on Facebook looking for a bassist and I got an audition. I showed up and found two guys in a basement in the burbs, they still haven’t realized I have no idea what I’m doing.” The missing piece to deliver twin leads and shredding parts arrived in the fall of the same year. “Actually, I write this on the eve of my one year anniversary (11/12/13) with these fine lads,” guitarist Patrick Powers begins. “If John was the Craigslist casual encounters and Alex was the Facebook poke, I was the Match.com success story. I messaged them on Bandmix because they actually had a clean part in their music video amidst the cookie monster vocals, and learned a song and joined up. Ever since I’ve been trying to get them to cover Ratt’s “Round and Round” and I won’t quit until they do.”

In May of 2014, the band moved from recording short demos and singles into the full-length arena, their debut album The Lives I’ve Ruined displaying a great balance between North American style aggression and European sense of fluidity and melody. It also doesn’t hurt that the band would put thousands of dollars behind the production of this product – which to their benefit enhances the professional sound, tone, and execution listeners will get when taking this in. “The writing process for The Lives I’ve Ruined actually started when our lead guitarist at the time left the band,” John explains. “We found ourselves unable to play shows, so we channeled all of our energy into putting an album together. With only 2 songs (“The Lives I’ve Ruined” and “Let Me Forget”) written in June of 2013, we booked studio time for September, and we got cranking to write the other 8 songs! The pressure of a deadline definitely helped, and we’re proud of the result. We greatly appreciate the positive feedback we’ve received; it’s definitely given us motivation to continue doing what we’re doing.”

Songs such as “Skin Grafts”, “Amityville”, and “Petrified” penetrate the skull and body through a vicious combination of Bijar’s extreme growl/scream approach and the natural balance between brutality and segments of groove/twin harmonies. I was curious to know what types of lyrical thoughts the band focus on through their songwriting. “I like to use lyrics as a way to kind of bloodletting out negative emotions,” Bijar explains. “I’ve had debilitating anxiety for a long time, so that’s where most of the inspiration comes from. On The Lives I’ve Ruined, I tried to blend in a few elements of horror into the lyrics as well.”

Speaking of those twin harmony and melody aspects in the music, one wonders how much pre-planning goes into where these elements take place for the band – because My Missing Half isn’t afraid to use acoustic guitar passages as well to give the heavier parts that much more impact. “That totally comes from our influences,” Bijan begins. “The quieter passages come from bands like Metallica and Machine Head. The harmonies come from In Flames and Iron Maiden. We don’t really plan out having songs that include those elements, it’s just kind of what ends up coming out.” Alex responds, “Personally, I have a ton of more classic influences, definitely more than the other members in the band and it kind of helps give a different perspective. Led Zeppelin especially I think was one of the most skillful bands in terms of the diversity in song writing. So, like everybody in the end we’re really just ripping off Led Zeppelin.”

A sense of levity is present when taking in My Missing Half in a live setting – as the band often decide to start off their sets with a few arena rock ‘staple’ songs in a brief way before pummeling the audiences through their melodic death metal originals. So how did Europe’s “The Final Countdown” and Survivor’s “Eye of the Tiger” get the My Missing Half treatment? Bijan explains, “Alex showed up to practice on day and jokingly suggested playing “Eye of the Tiger”. 10 minutes later we were playing “Eye of the Tiger”. We played it live once and it went over really well, so now we start most of our sets with a minute or two of a classic song.” And how do the members feel about their performances and audience response taking in the band’s songs? “It’s really hard to pull it off live!” Patrick says. “Between the difficulties of a good live sound at small venues for heavy metal, how needlessly technical we make our stupid songs, and trying to move around and not look bored at the same time, it’s a miracle anyone comes back to see us again!”

Admitting that My Missing Half is only at the start of what they hope to be a long career – Alex states, “We have big long term goals, but we don’t have any delusions of grandeur. We want to work hard, play some more cool shows, meet more cool people, and see where all of that takes us.” Concluding with thoughts about what they wish for the average metal fan to understand about a band of My Missing Half’s stature, Patrick delivers the following. “How by every single measure, being a working local metal band should be the worst, most miserable thing on Earth, but nevertheless we’ll keep devoting all of our free time to it and continue to love it for no rational reason. We often drive many hours to play in front of no one for no money but none of that matters. If more people understood that, we could help turn around this imbalanced ratio of 911 calls for most pits versus EDM related overdoses.”