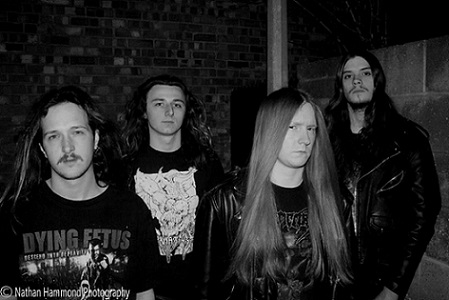 Note: this interview was conducted prior to the recent changes/losses in the band’s line-up. Alex Brown is no longer shredding for the dead with Monumentomb and decided to focus entirely on his other project Infected Dead.

Every decent post-90’s metal band memoir begins with booze and a Beherit shirt, does it not? “Years ago I was drinking at a metal pub in my local town of Maidstone. The Beherit shirt I was wearing prompted conversation very quickly when Alex noticed it, and we’ve been good mates since. Then after a long time later, years in fact we met again and decided to form a band with our strong agreement in musical tastes. At the same place a little later, I met Gaius while drinking at a mutual friend’s birthday, to then we got totally hammered. I met Lee at a gig Alex was playing at with local death metal band: Infected Dead. Alex heard that Lee was a decent and freed-up drummer and introduced us that night. We all started getting along very quickly and easy with no hassle fortunately.”

Monumentomb have many evident musical influences in genres, styles, bands, etc. and obviously did their research by exploring music before embarking on their own project. It’s not all about metal bands. “Shredders” like masterful Yngwie Malmsteen and alien-surfer Steve Vai are very beneficial for any musician, especially guitarists, to take notice of. “The first obvious one is old-school death metal, me [Byron] & Alex listen to a lot of 80’s metal from Yngwie Malmsteen to W.A.S.P. Styles and bands we take a lot of influence from are Bolt Thrower, Autopsy, Grave, Dismember, Morbid Angel, Carcass, early Entombed, Obituary, and Death. Influences always have a bearing on our development as players, especially as we greatly enjoy shredders such as Malmsteen, Tony MacAlpine, Steve Vai, Jason Becker etc. Lee is ever aiming to reach the same ability level as George Kollias and Gaius listens to plenty of technical metal. So, as a band, development is constantly in mind and ever evolving, which in turn stylises the overtones to our sound, structures, riffs and direction. We’re not aiming to be an overly technical band, as the fundamental idea at inception was to maintain the essential feeling and simplicity of most of the old-school death metal bands.”

The name’s band Monumentomb came quite naturally and has a killer death metal past. “It was an obvious choice immediately.’Monumentomb’ is the namesake of a killer album by the band Nominon from Sweden. They’re great guys and have impacted our ambition in many positive ways. Kindly, Perra granted permission for us to use the name. It’s a name that always stood-out to me and aptly it suits our morbid themes.” That’s pretty cool of Perra but since when do metallers have to ask permission to do anything? Politeness is not a typical manner for metal but if Byron Braidwood is anything like Lord Byron, then politeness and darkness apparently do go hand in hand. Things like these make people like them more mysterious and harder to figure out; maybe it’s an Englishman thing or a folks named Byron stereotype, or both, either way one simply cannot be named Byron and partake in making music themed so close to the Frankenstein design without it being pointed out but it’s

Metal has strong significance in Braidwood’s life and always has long before he was in a band. Again, one must explore a wide spectrum of metal before taking it into their own hands because it’s more than it seems. One of the oddest things is when musicians play metal but don’t like it, Monumentomb are not among those. “Metal music in particular has been a huge part of my life since I can remember. It’s always had a significant appeal in terms of the sound, attitude and image from when I was a child up to now. It’s certainly a vessel for anyone who has the ambition and passion/or wants to vent their thoughts and find an escape from mundane life. The fact that there’s sub-genre in metal for almost anyone just demonstrates the complete versatility that other genres tend not to possess.”

There’s quite the array of themes and ideas infused in the songs of Ritual Exhumation. This album alludes to many things such as the undead, exhumation, zombification, ritual witchery, nightmares, the macabre, and so on, correct? “You’ve pretty much nailed most of it there! The themes are essentially all based around necromancy and death rituals/rites with an apocalyptic goal, with narratives and side-stories in between. A lot of inspiration comes from the Necronomicon by Lovecraft and related grimoires in terms of direct literary inspiration. I’m an avid fan of 80’s horror and splatter films and comics, it’s usually easy enough to write lyrics to these themes but it’s tough to attempt a new angle when a lot of the subject matter has been broached upon before.” Nailed it like a corpse on a crucifix.

How accurate is it to say Monumentomb make Halloweenish music? As I said in the review, Monumentomb make the kind of metal best listened to during night hours, or better yet, on Halloween. According to Braidwood, that’d be a pretty accurate statement. His response: “you’re not far-off the mark there, thanks for the comment! It wasn’t solely intentional, but more incidental due to the morbid themes. I’d like to think it’s a release to be enjoyed all the time but listening to it at Halloween it makes sense, it would optimise the atmosphere and themes we’re trying to convey.”

Writing, rehearsing, recording and mixing music is a different process for every band and a different turn-out every album made. Ritual Exhumation is one of those albums destined to be made no matter what because Braidwood and the other musicians intended it to be so. Wisely, they had a head start on the music previous to Monumentomb. “It was all put together fairly quickly, most of the riffs had been written before the band even formed. As I mentioned earlier, the intention was with myself and Alex to create a revival of the good days of Death Metal with an updated touch. It was recorded within 5 days, for 6 tracks that’s extremely quick! As I’m sure many others in bands say the same, there is always room for improvements and things that would be changed in hindsight. Given the time constraints we had, for a debut it’s not been a bad start for the band at all.”

Truly not a bad start at all, far from it. In more ways than one it’s appropriate to say that Ritual Exhumation is bloody good.

“Majority of the writing in the early days started as just me and Alex bouncing ideas off each other and listening to a ton of music. The writing process sped-up dramatically when Lee joined, which then transpired into just the two of us meeting-up every weekend and continually getting a better sense of how the structures should form. In terms of funky issues, we only had one or two which involved a piece of studio equipment suddenly die on us while tracking guitars, but that was a minor set-back as the studio engineer (Graham) fortunately had a friend who lived around the corner from the studio who had the same identical processor.” That’s unluckily lucky. Judging by everything else Monumentomb have shown us so far, 13 might as well be their lucky number.

Was producing a debut album more or less difficult than you initially expected? “Slightly less than I thought actually, always keeping the ‘have a plan B’ mind-set ensured things ran very smoothly!” And indeed, 13 is their lucky number. Monumentomb have been up to some “auspicious” and mischievously superstitious, but serious, tasks as of late. “At the moment [now a couple weeks ago] we’re headlining a local show on Friday 13th (very auspicious) and playing a festival in the UK called Beermageddon with Onslaught in August, then after that we’re playing our first London appearance with Gravecrusher in October. Apart from that we’re currently dealing with a label to release the EP on CD and concentrating on getting a full-length written.”

Of course, there’s always a last word to leave on: “Thanks very much for the comments and we’ll be making an announcement soon in terms of who’s releasing the EP, watch this space and cheers from the ‘Tomb!”