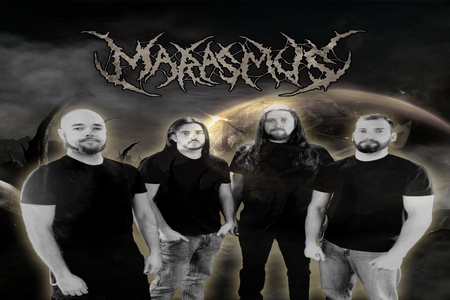 Usually we at DR don’t do the answer/response format on these types of features, but Marasmus’ vocalist Devon Ferrera’s responses were of such high caliber it seemed silly to paraphrase what was said. For those looking for some brutal death metal that will get stuck in your head, Marasmus is a band you need to hear.

Devon Ferrera: The mission of Marasmus is to bring the ideas of groove, imagination and brutality together. It is our idea to make music that has our own brand of sound. That being said, we also believe in making sure to keep the integrity of the culture. Meaning, if we can’t play it? We won’t record it. We are not elitists in that sense, but we are of the opinion that part of our culture in “Death Metal” is based on what you can pull off. Some bands are more technical than others and we admire the bands that have kept it real. Some bands have this idea that if they program it they don’t necessarily have to play it. We are completely against this and would prefer to play less technical rather than lie to our listeners. Again, we appreciate anyone that is getting work in the Metal genre. But we do believe that programming drums or any other instrument in order to be included amongst real working Extreme metal acts is disingenuous at best.

Dead Rhetoric: What bands helped shape the sound of Marasmus?

Ferrera: This has changed over the years. We have always admired the key bands that one expects. However, I think each member has their own likes and dislikes. I am the vocalist so I would be pretty silly if I did not mention bands like Deicide, Cannibal Corpse, Spawn of Possession, Cattle Decapitation and Behemoth as solid influences to my vocal style. But lyrically I take notes from a lot of different music. Neil Fallon from Clutch was a super influential person to my lyrics and writing style. For the other band members? The bands that I hear them talk about are Decapitated, Aborted, Septic Flesh, Fleshgod Apocalypse, Nile, and Gojira to name a few. I’m sure they are going to give me shit for missing a couple that are obvious. But I did my best in their stead.

Dead Rhetoric: Three of the album’s tracks initially appeared on an EP earlier this year. Were there any significant tweaking to them from that release?

Ferrera: The three songs were “Gutting the Orb,” “Post Mortal Possession,” and “Infinite Torture.” They were all rerecorded. We made some minor changes in one and major changes in a couple. I think Trynt (drummer) wanted to rerecord the drums on all three. On “Infinite” we had our good friend Justin Bird do some programming and keyboards for that track. We have been planning and working on more material like that, so you will hear more of that in the near future. We added a guitar player since we recorded the EP. His name is Brandon Culligan. He really stepped up our sound by just having another educated opinion in the room. So there was some tweaking in many ways. If you go back and compare the two different recording sessions? There is no doubt we took more time on the album

Dead Rhetoric: How do you feel that Marasmus has stepped up since your debut album, Mountains of Dead?

Ferrera: I feel like we are a different band with the same artistic goal. We think our writing ability has changed and the whole modus operandi has shifted. We have become more relaxed about trying new things. It’s not all blast beats and gut vocals all the Time. We have a slightly different take on the culture then we did maybe 3-4 years ago. We are constantly torn between being overly technical and overly groovy. It balances our writing system out and seems to keep things unique for us. We are a more spontaneous band. We do what we think is unique and pleasing to us first.

Dead Rhetoric: The artwork of Conjuring Enormity is killer. How did you decide the route to take on the cover art?

Ferrera: The artwork was done by Rafael Tavares from Sao Paolo, Brazil. We were online looking at artists and we stumbled upon his page. We were convinced that we found the guy to do the cover. It was an email collaboration for the most part. We gave him the premise of the album and the idea we were going for in the theme. The image is his take on a description of a Thelemic Demon called “Chronozon”.

Dead Rhetoric: When writing death metal, what do you feel is the most important factor to help make you stand out?

Ferrera: In our opinion, death metal is a constantly evolving medium. Someone tries to pin point it and it goes the other direction. For me as a vocalist, I went from being totally guttural to making my mission to find a unique approach for Marasmus. I got tired of hearing “I can’t understand the lyrics”. So I decided to do everything I could to make that possible to the normal person that may not listen to this music as much as we do. I simplified the amount of vocal patterns I do and make sure that the lyrics are listenable. I do think that most people even people that try to make this music think that we are screaming. I assure you it isn’t, and if you are screaming into the microphone without using your diaphragm? You won’t be do this for long. So I guess, to answer your question. I think it starts with the writing approach and the overall themes that you choose to write about.

Dead Rhetoric: Likewise, there’s a large groove element within the band’s sound. How do you balance the amount of groove with the more brutal aspects of the band?

Ferrera: It just seems to come out that way. With the different personalities and influences in the band it just sort of happens. In a way, all of us seem to be cognizant that the tech death thing is really popular. It seems like there is a really technical band that comes out like once a week. Not that we don’t appreciate that, it’s just a move to find our own sound in the genre.

Dead Rhetoric: Looking through your Facebook posts, it seems you have found a place on a number of diverse bills as they come through the area. Do you have any favorite shows that you have done?

Ferrera: Yeah! We have been very fortunate. We get to open up for some really killer bands. Right now we are opening for Nile in January and Fleshgod Apocalypse in February. One of our favorite shows would have to be opening for Morbid Angel at the Granada in Lawrence, Kansas. That was an incredible opportunity and we were received very well.

Dead Rhetoric: What do you feel is most important to keep in mind when you are playing live?

Ferrera: That it’s a performance. People didn’t come to see us run through our set. We are hired entertainment and it’s in our best interest to make the show as exciting as possible. Without being pretentious douche bags of course

Ferrera: Our scene is very strong. I wish we had more help getting exposure in our own city. We still get new fans from our own area. As far as shows, we are getting really killer shows that come through. We have a crop of really amazing bands in the area that has helped create the Metal scene we have. There have been some recent signings to reputable labels in the area. That might usher in some new opportunities for exposure that we might not have had before?

Dead Rhetoric: What are a few of your favorite albums from 2015?

Dead Rhetoric: What can we expect from Marasmus as we move into 2016?

Ferrera: We are writing another album, we will playing key shows. You might even see us on the road a little, which we typically don’t do a lot. Look for at Foothills Gutfest 2016. There are some other developments that you will need to stay tuned to hear about. 2016 will big for us. Cheers! Thanks for talking with me. 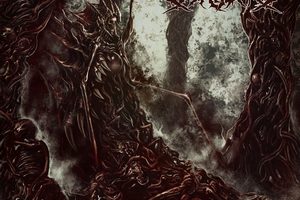 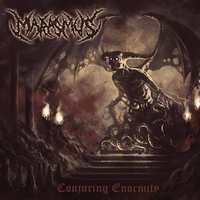