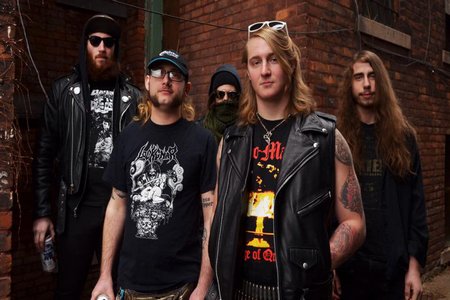 Natural evolution dictates that as newer bands gain critical acclaim and ascend in popularity, a slew of newcomers will hopefully morph those influences into something as equally intoxicating. Detroit, Michigan’s Euphoria have a lot of love for not only old and new thrash, but also add in a bit of punk and NWOBHM elements to the proceedings – making their debut album Operation: Genesis precise in its progressive thrash/death stance. Many of the guitar twists and riff transitions within “Primordial Dominance” haven’t been heard since the Twisted into Form period of Forbidden – while at other times the sandpaper, rapid fire delivery of Justin Kelter mirrors everything from Death to Destruction and a touch of David DiSanto from Vektor notoriety.

Taking on these questions is drummer Louie Badalament with supplementary support from vocalist Justin Kelter – and expect to hopefully see the band doing some regional touring in support of this record, as it has the power and energy to grab a large contingent of thrash/death heads who are more progressively inclined.

Dead Rhetoric: Tell us about the formation of Euphoria – as the idea originated a few years back, but took some time to find a stable, active lineup. Had any of you known each other from previous bands in your local scene?

Louie Badalament: Justin Kelter came up with the concept of the band. He had a few friends he was trying out to get the ball rolling, but never could find a dedicated drummer or bassist. He ended up getting Eric Lemmon and Bubba Colonna on guitar. My previous project Axe Ripper had just split up after extensively touring in 2015. I wanted to be a part of a new band full time, and having wanted to play with Bubba for quite some time, I jumped at the opportunity to join the band. When I joined, it clicked instantly. We needed a bass player, so I recruited George Ford who I played with in the bands Axe Ripper and Crumble.

Dead Rhetoric: Operation: Genesis is the band’s debut full-length. How did the songwriting and recording sessions go, were there any strange or stressful situations you had to work through and how do you feel about the overall final product at this point?

Badalament: Justin and Bubba had all of the music and lyrics written before I joined the band, so it was just a matter of me learning the songs, which only took a couple months. We hit the studio after our first show in late March. We recorded with Vince Williams at Mount Doom, and I think I can speak for the whole band when I say he gave us the recording quality and sound we truly desired. Recording with him was an absolute pleasure.

Dead Rhetoric: Stylistically there is a blend of everything from punk and NWOBHM to progressive thrash to these ears. How are you as a band able to come to a consensus for blending these elements together and make it Euphoria without overwhelming the listeners?

Badalament: A lot of the difference in style comes from our personal influences in how we play the music. Bubba practices guitar at least 3 hours a day, and you can tell he brings a lot of the “progressive thrash” sound to the band. We all have different influences that span from different sub genres of thrash, metal, punk, etc. that we all try to blend in with our sound.

Dead Rhetoric: Is Operation: Genesis a full on concept record – if so can you give us a little insight into the storyline?

Justin Kelter: Our (record) is a concept album. It’s about a supreme race of beings from another dimension creating earth as a project to see if one day they could create a race that may one day surpass them. So after creating and realizing that the dinosaurs were a failed experiment they destroy them and take interest in primates. After genetically altering the early forms of man’s DNA (which is the missing one link in evolution) the story jumps to the future, a world of absolute corruption. The beings have a trial against the human race, ultimately deciding to systematically destroy them by sending nanobot parasites hack into the world’s nuclear systems and launching them all wiping all life off the planet. Then to top it off they destroy our solar system by collecting all the souls that populated earth to power a weapon known as the Andromeda effect, which heats up the planets core until it implodes creating a gravitational collapse so powerful that in generates a supermassive black hole that devours everything. Leaving no trace of our solar systems existence.

I pretty much came up with (the story) on my own but I did some research to back up my ideas and theories. I’ve been playing video games, watching anime, and sci-fi movies my whole life so a lot of bits and pieces of the concepts stem from that.

Dead Rhetoric: Who designed the cover art – as it’s a striking piece that provides insight into some of the lyrical content contained within? Was it a back and forth process or did you give the artist free reign to come up with this final look?

Badalament: Justin created the concept of the album art, but I hired Brian Thuringer to get the cover art created. I’ve gone through him in the past with Axe Ripper and Serpent Men, and to this day he has never let me down with his work.

Dead Rhetoric: How would you describe Euphoria in a live setting, and what have been some of your favorite shows or places to play in your brief time together?

Badalament: Euphoria have only played one as of now. We have a CD release show in June, and we are going on an 11 date Midwest tour in August….more touring to follow.

Dead Rhetoric: What are your thoughts on your local Michigan metal scene – do you find there is decent support from promoters, clubs, fans, and other bands? Who are some of your favorites that you think the readers need to pay attention from your metal scene?

Badalament: Detroit has a pretty strong local metal scene. I feel like everyone kind of goes to each other’s gigs and supports the other bands. There’s been more and more unity throughout the Detroit metal community in the past 3 or 4 years than ever in the past. Against the Grain, Manic Outburst, Straight Six, SNAFU, Wulfhook, Nydeshka, Stone Ritual, Bison Machine, Nuke, Perversion, MRSA, Centenary, The Gutter Ghouls, Anguish, The Wild Savages, Acid Witch, Child Bite, Mammon, Her Dark Host would be some of the bands that I believe people need to look into from our local scene.

Dead Rhetoric: What types of goals does Euphoria set for themselves in the short-term and the long-term?

Badalament: This may depend on who you ask in the band, but to me the short term is to get a label to do the second pressing of Operation: Genesis (preferably a vinyl release!), having a good Midwest and East Coast tour in 2016, and touring the rest of the country in 2017. Long term goals would be touring internationally, recording and releasing more albums.

Dead Rhetoric: Considering the powers for bands to gain attention through the Internet and various social media platforms, how does an independent, self-sustaining act like Euphoria cut through and gain attention given the hundreds of thousands of bands also trying to sustain interest? Or do you believe live shows and face to face communication can be a difference maker?

Badalament: Honestly it all makes a difference. The internet helps expose our band nationally and internationally, but I think nothing on a local level will ever be more important than showing up to your friends’ shows and passing out flyers for your next gig.

Kelter: Honestly we sound just as good live as on CD. And although networking in this day and age is key, dominating live shows just goes to show that we are a force to be reckoned with. We have only played one show and we killed it. About 200 people were there. We opened for Witchaven, and after that we’ve been the talk of the town ever since.

Dead Rhetoric: What are three albums or bands that everyone in the band can agree on as game changers for Euphoria’s outlook and vision of metal – as well as the best show memories that you’ve had as a concert attendee through the years?

Dead Rhetoric: What concerns you most about the world that we live in today – and needs to be addressed in your eyes over the next decade?

Louie: Well, there are a lot of problems in this world. My opinion doesn’t mean shit, and bitching about that wouldn’t solve anything. I just want to record and tour, I’m not out to save the world. 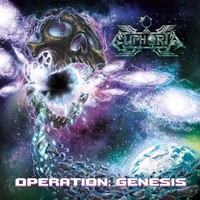