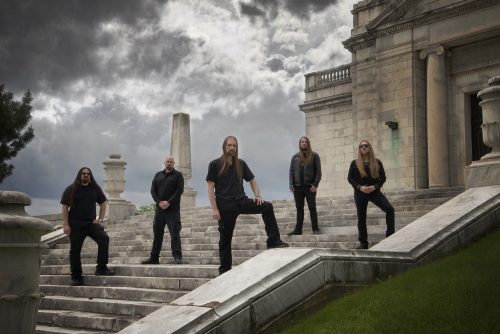 Dead Rhetoric: You recently released a long-form YouTube video discussing the Brazilian Novembers Doom tribute album that came out. Obviously it’s quite an honor when bands choose to pay respect to your work – how did you find out about this developing, and are you surprised that your music has made such an impact on one underground scene and country like Brazil?

Kuhr: Yeah absolutely. Even a classic death metal band like Sinister recorded one of our songs off our first record (“My Agony, My Ecstasy”) for an EP. When I heard about this, our first question that we kind of joke about is, why? Why did they choose us? I look back at the start of the band in my mom’s basement, and I look at how far its reached on a global scale. How important our music is to some people – and it’s very humbling. When a country like Brazil in South America gets fifteen bands together to appreciate our band that much to learn our songs, go in the studio and do their own takes on it and put out an album like that- we are so humbled and blown away. I would have never expected that in the career of our band.

For someone to do that- we are still shocked and we will forever be humbled. It’s an incredible feeling. It’s something I never would have ever expected, and so proud that we’ve done something that moved people in such a way to give us that honor.

Dead Rhetoric: Have there been songs or bands you’ve wanted to cover and record, and what do you consider some of the best covers you’ve heard of non-metal songs turned metal?

Kuhr: Wow. There (are) all kinds of stuff – we talk about covers all the time. The biggest issue we have with that is we have five guys in the band with very different tastes in music. Getting everybody to agree on songs to do can become difficult. What can we do that really will sound good as Novembers Doom? We’ve done “Angry Chair” by Alice in Chains, there are certain songs we think we can do justice to. People laugh, but every time I tell the band the idea I have is always looked at… there’s a Coldplay song that I think we could make a metal version of that would be dark, heavy, and creepy. When I hear it in my head it’s great, but that’s going to be a tough one to get everybody to do (laughs).

There are a lot of great covers out there that bands have done that I think are amazing. Crowbar… I can’t think of the damn song (“Dream Weaver” by Gary Wright). It’s one of the best covers I’ve ever heard, my brain is in a million places. I thought Amon Amarth did a great job with the System of a Down song “Aerials”. That was great – I know they caught a lot of flak for it, but I thought it was awesome. I like when bands do something for fun, take a chance, and don’t do something so serious. There are a lot of fans that expect if you are doom band, you have to be somber and miserable all the time. We are a bunch of goofballs, and that couldn’t be further from the truth. We are not like that all the time.

Dead Rhetoric: Have your thoughts and outlook on the heavy metal genre changed now in your late 40’s compared to your teens, twenties, and thirties – or do you believe your passion and commitment have grown even stronger?

Kuhr: I think I’ve… that’s a really good question. I’m embarrassed a lot by some of the metal these days. I think that what was at one point a way of life, a lifestyle and not… put it this way, back in the 80’s and the 90’s, we didn’t call it a battle vest. I didn’t put on a costume when I went to a concert, I wore my jacket that had patches on it every day. That was life. Now it seems like there’s a show coming up, I better put on my black and battle vest and try to fit in with the metal people. No, no, no – you either are or you aren’t, metal is not Halloween 365 days a year. You either live that, and that is your life and what you do – or it’s not. I understand you can’t always be what you want to be when you go to work every day, there are exceptions to every rule – but I don’t feel that the community, all of the community – there are some communities that live and breathe metal and it feels like the old days. Sometimes though I go to shows and I don’t recognize anybody anymore – and it doesn’t look like that would be a metal show. It might be me in my older age. I have no idea – I don’t feel the same way about it that I did when I was a kid – but that could very well be my lifestyle change.

Dead Rhetoric: Do you believe with the advent of social media and internet communities, it actually has created more division than drawing people closer in metal?

Kuhr: Completely. It has created this aspect where people need to put things in their own little box. If it can’t be categorized and fit in its comfortable little place, people get upset. Doom metal – there’s 95 different subgenres, and remember the day when it was just heavy metal? Rock n’ roll, thrash metal, death metal, black metal – that was pretty much it. There are 55 different divisions in each one – oh I’m not into this, so I don’t even give it a chance. If there’s one thing I wish I could change in the band’s career, going all the way back, it would be to never put the word doom in our band name. That I think has pigeonholed us to a lot of fans who would probably have giving us a chance or opportunity to listen to us just because they associate doom with something completely different because of the 55 different genres so we won’t get the opportunity to be heard. The internet had a lot to do with that for sure.

Dead Rhetoric: What’s on the horizon for Novembers Doom over the next couple of years – will there be outside recordings going on for the other members to supplement the live performances for ND down the line?

Kuhr: We are going to get out and promote and play out as much as we can. We always have things in mind that we want to do, traveling, performance, shooting videos, possibly shooting another live DVD/Blu-Ray down the line. Everybody else has side bands and other projects that they do as well just to pick up the slack in the band or that’s what they love doing – music is such a part of their lives, they want more and more. As long as Novembers Doom keeps doing what we want to do, it’s all good. It keeps everybody’s chops up and within the scene. It’s all a good thing.