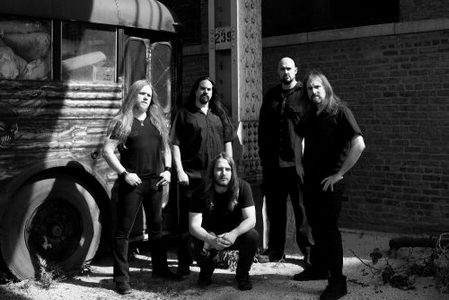 Dead Rhetoric: What have been some of the greatest memories that you have had surrounding Novembers Doom – they can be album related, show related, or maybe specific interactions you’ve had with other fans/musicians?

Roberts: There’s been tons. Far more good than bad. The fact that we’ve gotten to travel, not all over the world but a good portion of it. Everything from spending Thanksgiving and being homesick because we are on tour in Europe, and everybody on the tour getting treated to a special dinner when we were in Berlin or Munich, somewhere where they don’t celebrate Thanksgiving. We sat down all together on the tour and got this amazing meal that the promoters cooked for us because they knew we would be homesick on the holiday- having moments like that, those are the kind of things that are going to stick with me for years. Meeting tons of fans – people that have become close friends of mine. One of our fans actually had become a friend of mine, someone I had never spoken to before, but he was reading about my medical issues and this was about three-four years ago. It turned out he had not only experience with the same medical issues, he knew surgeons and doctors in the area who specialized in this and would probably refer me to them- and that’s exactly what happened. Because of being in Novembers Doom, I met this awesome guy who helped me find the medical help I needed to save my life more or less – it’s those kind of things I think about when I sort of have bad days. It can be hard to keep things going- it’s not getting any easier as we get older. We thought it would and we were wrong. On those days where I am questioning whether we should do this anymore, or why I have done this long- I think about the amazing people that have come in and out of our lives because of this band.

Getting to play things like the Graspop Festival in Belgium twice now, playing in front of 10,000-15,000 people. Playing big festival in the Czech Republic, Spain, Portugal- things that I used to dream about when I was 13 at a W.A.S.P. concert. Now I get to do it. I’ve got so many great memories like that, I’m so grateful that I live the life that I do, even with all the ups and downs.

Dead Rhetoric: You mentioned in another interview the period of 1989-1993 being very underrated but important to your tastes in metal, especially in terms of differentiation or bands that may have been ahead of their time that didn’t necessarily gain massive success. Could you tell us some of your favorite bands and albums from that period?

Roberts: Oh man, that’s a good question. For example, there is one band that so people have barely even heard of in the metal scene, because they weren’t really a metal band. There was a band that was signed to RCA back around 1988-89 called Mary My Hope from Atlanta. They were one of those weird bands like you talked about that transitioned between the hair band era and the alternative music and death metal music era. They were metallic in a way but also lent themselves to David Bowie, a weird mix between Danzig/Samhain meets Bowie and R.E.M. and Robert Johnson. An odd mixture of stuff – but I was one of the few who knew of them. So much of what they do in their chords and melodies that’s been a huge influence on my writing in Novembers Doom- I’ve borrowed tons of stuff from them. Although they are more well-known now, other bands like Trouble from Chicago. Those albums they put out during that period like the self-titled and Manic Frustration, nobody sounded like that band- with the Sabbath, Zeppelin, and Sir Lord Baltimore with the Beatles, so many influences rolled into one sound. I was privy to them early on, another huge influence on my writing when it comes to harmonies, solos.

You and I could do a whole thing talking about music from that period. The stuff Voivod put out at that time, Thought Industry, because they were quirky, progressive, but then they could be heavy and move into something that was left of the dial. Those particular years, being such a formative time for me- that is romanticized in my mind. There were some creative bands in that time, that wound up being overlooked because once again, it didn’t fall into line with straight up grunge, alternative music, or straight up death/black metal. The accepted genres of the time. Albums like The Goddess from Mind Over Four, that was so good. You become more adventurous into your college years. Warrior Soul, the Waterboys…

Dead Rhetoric: There were still some metal bands I enjoyed in that period too, I know you mentioned Paul (Laganowski) from Realm recently dying… they were an awesome progressive thrash band for me.

Roberts: Again, I have the benefit of being in Chicago, and Realm was about 90 minutes north of me in Milwaukee. They would come down, and my old bands did gigs with them in the Mid-West. So I got to get to know them a little bit. That’s another band… Realm is one of those bands, sadly with Paul’s passing recently. I listen to them pretty regularly. I was listening to those Realm albums, god this is still an influence on me. I’m not saying I’m anywhere near as good as Paul or Takis were, the influence is definitely there. I remember seeing them live, they were still supporting Suiciety around 1991, and all of a sudden they bust out a new cover of King Crimson “One More Red Nightmare”- and I’ve been a King Crimson fan since I was a kid. I grew up on progressive rock to a large degree thanks to relatives. Here was one of my favorite speed, thrash, progressive metal bands doing this incredible cover. Now tons of people would do that, at the time that was incredible and they did it so faithfully while making it metal. They were so creative, we find the same theme throughout our discussion – what made Realm stand out was they clearly had some different influences going on. At the time this wasn’t really common in the underground metal scene.

Dead Rhetoric: How do you see the rest of 2017 and early 2018 looking for Novembers Doom on the show/festival front? Will you look into smaller touring jaunts and European festival action as long as it’s financially feasible?

Roberts: You just hit the nail on the head. We are looking into that right now. Nothing is confirmed, we are definitely talking to promoters. We want to figure out how to do this, it’s hard when we can only go out for a week or two weeks at a time. It’s usually easier financially to do one big long tour and make your money and hopefully break even. We don’t profit too much from this band, every now and then something nice happens. Anything we earn it’s about keeping the band going. We want to do America, we haven’t done anything here in a long time other than some little hit and run things like Maryland Deathfest. What we will have to do is break the country into two halves, do a Mid-West/East Coast kind of tour, and then do the West Coast. That’s our first priority, maybe this summer and fall. We are looking into getting back to Europe- and that could probably happen, but more to the end of the year or beginning of 2018. We are always hoping to get onto festivals, because you play to a lot of people all at once. Logistically with money, making it happen is the trick. So we’ll see. We’ve thrown out ideas how we can make the money we need to make this happen- you see crowdfunding and special releases/concerts, we will sit down and figure it out to make it happen. We want to get out there and play, we are really eager to play these new songs.