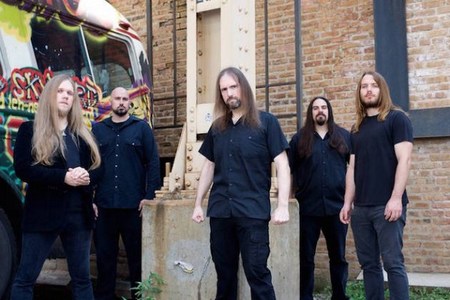 Dead Rhetoric: What do you hope an audience member gets out of Novembers Doom when they see the band live? Do you have a personal preference for the studio or the stage, or are both equally exciting and engaging for you?

Roberts: Both. I love writing and recording albums – it’s a great process and it’s exciting to see songs come from nothing and be completed that we know thousands or more are going to hear. Live is a whole different thing- I feed off of people’s reactions. I love to meet people- one of my favorite things about playing live is meeting people. We’ve never been one of those bands that sits in the backstage and refuses to meet people, or charges people to do meet and greets. I think one of the best parts is meeting people- the energy you get being on a stage and getting that immediate reaction or how they are going to react to a certain movement or vocal or guitar solo, I crave that energy. It’s part of what makes the fact that we can’t do it as much anymore because of our physical limitations that much more depressing.

As far as what I want people to get out of a show. I don’t know, I want people to be entertained. As long as people walk away going- yeah, that had some kind of impact on me, as long as people enjoyed it – this band is for real and not going through the motions. We are not above anybody, a lot of times when we are on stage we are still engaging with the audience. We look them in the eye, we talk to them, we joke with them – we’re still on their level. One of the best things that ever happened to me about being in this band and everything that we’ve done is the people that I have met. Everybody from fans in other countries, and people that are good personal friends of mine that I never would have met if it wasn’t for this band. We are doing this for the right reasons.

Dead Rhetoric: How do you feel about the work that the members of Novembers Doom do outside of the band (Paul with These Are They and Garry for Without Waves for instance), and what the impact is to the group when you come together again?

Roberts: I think overall, it’s a good thing, and a positive thing. It helps to keep everybody focused on what we should and shouldn’t be doing. I know that sounds a little sinister, what we shouldn’t be doing. There are a lot of things that Paul does in These Are They, that just I don’t know if it would ever really fit in with Novembers Doom. I don’t think we have to fit into a particular genre, because I’ve never been like that, but in terms of jiving with us as a group of musicians – there are things that Paul does with These Are They I couldn’t see myself, Mike, or Vito playing on and adding anything good to. Same with Garry and Without Waves- that’s such a completely different thing from what we do, and it’s wonderful. They are a great band. It’s a good thing because it allows those guys to stretch out creatively in a way that it doesn’t become a problem, where everybody is trying to cram too much of their crazy, diverse influences into Novembers Doom.

Everybody comes back and has a focus on our sound, it works naturally. Schedule-wise it hasn’t been a problem, we manage to make everything work out well. The only weird thing personally is I’m the only guy in the band who doesn’t really have any other creative outlet other than Novembers Doom. I will go do acoustic cover shows for fun, it’s not the same thing though as These Are They and Without Waves. I’m envious of them- I’ve got ideas that I’ve been working on but the truth of the matter is, there’s rarely any spare time for me outside of Novembers Doom. I tend to be the guy that’s sort of like the one who keeps steering the ship musically.

Dead Rhetoric: With the internet knocking down borders so to speak, do you think there is as much country to country distinction in the metal genre these days?

Roberts: I think people try to do that still. I just read a review, it was a negative review but I’m not going to say who it’s from because I don’t want to give them any press. It was a guy from another country who was putting us down and pull the whole ‘well they are American and try to sound British like My Dying Bride, blah blah blah’. The same shortsighted b.s. that people have tried to throw at us over the years. I think they try to do that, but I don’t think you can do that anymore. Because of the internet and the reach of it, how do you… I know that black metal originated over in Scandinavia, but there have been some amazing black metal bands that have come out of opposite ends of the earth. I can’t discredit that just because they aren’t from Scandinavia and weren’t around in 1991.

I think that’s one of the best things that has happened to our scene- the internet has made it possible for people to hear music from all over, spread their music all over. How many times do you see these projects where you have musicians from all over the globe collaborating, and most of the time they aren’t even in each other’s presence, they are operating via the internet. Doing these things where they are sending files and rehearsing through Skype, it’s incredible. I think that this has saved our scene to a degree. I know there are some downsides to it too but I think it’s allowed the scene to not become too stagnant and people getting too caught up in particular regions. I remember when we were younger, if you would read the press you would think the only death metal was coming out of Florida, Buffalo, NY or Sweden. The truth was there were amazing death metal bands from all over, Chicago being one of them. But back then it was really hard to get it out there and get that kind of attention and let people know. People now have gone back, I see people from Asian countries talking about how they love the Chicago death metal scene. I never thought that was going to happen.

Dead Rhetoric: Reaching back and listening to those Cianide records…

Roberts: Yeah! Cianide, and Contagion, Usurper, Sindrome- and you are seeing all these 19-year-old kids in the Phillipines talking about his favorite band being Cianide. What? It’s amazing- and that’s largely due to the globalization of the internet. Overall I think it’s a good thing.

Roberts: Oh my god! Where the hell do I even start with that. You say this mere hours after we just bombed Syria. In all seriousness, what worries me the most about the world is the fact that I’m seeing people forgetting lessons that were learned in the past. I’m seeing a lot of people moving forward with minds that seems like they’ve been wiped clean of a lot of the important life lessons that we learned. And not just in America, but everywhere. We seem doomed to repeat some of the same mistakes over and over again. That worries me- and it worries me that everybody still thinks things are so black and white, swinging the pendulum from one end to the other. Everything seems to be extremely liberal or extremely conservative. I’ve been around long enough to realize in most cases that’s not the way things work really. There’s all this gray area and middle ground where all the sensibility exists.

It’s the same thing in scenes of music- I had really hoped that categorization and labeling, sub-labeling of music- that this would break down more than it has. Instead of people opening up more, they end up huddling more in their groups and being more defiant – only into extreme hateful Viking whatever metal music. Dude, put on a Hall and Oates record and relax man! (laughs). Stop worrying about so much about whether something or not fits into this specific sub-category so neatly. I don’t think that everybody taking these extreme approaches to stuff, whether it’s their musical tastes or political things, everything benefits from having an open mind and being able to see other sides of things- even if you don’t agree with them. At least attempt to understand other things out there. You can’t just start closing off to everything because you don’t like it or you don’t get it. It’s so important to see other sides of things.