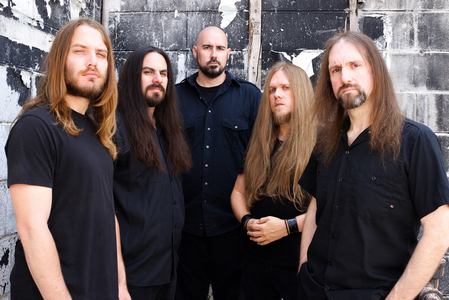 Evolution constantly occurs in all forms of life. We are born, we grow up, we learn from experiences, we adapt, we modify, we mature, and eventually settle into what we hopefully do best. When it comes to purity in the metal genre, many applaud the development of Chicago’s Novembers Doom. Their form of dark metal embodies a wide array of influences – doom to death to progressive and even alternative/ atmospheric – and they wouldn’t have it any other way.

Hamartia as their tenth and latest studio album illustrates a quintet consistently challenging themselves to establish songs and output free of boxed in categorization. Heaviness, ambiance, restraint, clean vocals, growls – it’s all in there and more. Proof that the art of the album in heavy metal will probably never die, despite the naysayers who think otherwise in the digital world. Feeling the need to discuss more about Hamartia and the goings on of the band, we reached out to guitarist Larry Roberts and had a wonderful hour-long talk about a variety of subjects.

In this conversation, you’ll learn more behind the guitarist, the changing aspects that happen due to the band’s philosophies and experiences as they grow older, viewpoints on visual mediums plus live shows, and much discussion related to music in general outside of Novembers Doom. This was a personal favorite of mine as of late, so enjoy.

Dead Rhetoric: You’ve now been in Novembers Doom for over 18 years – where do you see the growth and development of the band in its career, and how do you think you’ve changed as a player and person as a result?

Larry Roberts: Oh man, I’ve changed so much from back then. One of the things that made me join this band in the first place is that I saw how much the band had grown in the ten years before I joined. I knew these guys locally, seen them play together many times and always supported them. The growth they had just in those first ten years was astounding. They took a very primitive, uber death/doom slow mixture, almost like Grave tuned really low on the beats per minute. By the time they started putting out For Every Leaf That Falls and then when I heard what they were planning to do for Of Sculptured Ivy and Stone Flowers, I said this is a band I can see, even if I don’t fit in completely right now, they have room for growth and will absorb the influences of people that come into (the band). That’s not the case with a lot of bands- you come in and there are set ways, you do what they want you to do. That was never Novembers Doom, we’ve taken great advantage of the influence and inspiration of every new guy that comes into the band, and that continues on. That’s why no two albums we’ve ever done have ever sounded the same. There aren’t a lot of bands in our scene that can say that.

I don’t want to be disparaging to anyone, but in the doom metal scene in general, growth and change is not greatly regarded highly. We’ve always been the band that’s tried to do the opposite of that and said, no, we grow as people. Paul and I talk about it all the time, the influences and where we were coming from back when we were writing Sculptured Ivy and The Knowing compared to where we are at now, we’ve experienced life so much. And life makes such a big difference in our writing, if you can’t tell. Especially for Paul lyrically, it makes such a difference. It’s hard to look inward, I’ve grown as a person.

When I first joined Novembers Doom, I was more of a technical thrash metal guy. I was more considered about precision and technicality and everything. Over the years that’s drifted more into being progressive more so than technical. Progressive music has always been a big influence on me since I was a kid, so now I’ve learned to focus on being progressive without trying to be over people’s heads. I think that shows in what we are doing now.

Dead Rhetoric: Paul mentioned in our previous interview for Bled White your medical conditions and surgery – how is your health these days, and does it affect your workload in the band?

Roberts: Yeah, absolutely. Getting back to how life has changed things, not only has it changed our writing but it’s changed our entire attitude towards the band and how we’ll do things, and what we’ll do and not do. I had that surgery just before Bled White came out, that helped me quite a bit and it’s improved my life but I still have the same problems essentially, they just aren’t as immediately dire as they once were. My problems are all gastrointestinal, which is not fun (laughs). It makes things like travelling for the band really difficult, and then on top of it you add in the fact that Paul while he’s lost all that weight, which is great – he’s still got his spinal diseases that are never going to go away. Other guys in the bands have some various physical things- we are like the geriatric band, I swear to God! (laughs). It’s caused us to have to be more cautious and think things through a little bit before we jump. It hasn’t affected our workload in terms of writing, but it has affected us in terms of touring, travelling, being able to be away as much as we were ten years ago when we could be away all the time.

Getting old sucks, and having these medical problems sucks, we just try to adjust what we do. Right now we are looking into touring for the new album over the course of the next year- we didn’t do a lot for Bled White because of the medical problems and needing time to recover. Again, we are coming to the realization that any traveling we do we are going to have to keep it like light and sporadic. I know that sucks, I am sure a lot of fans would prefer if we could go out and do a full five week tour and get to everybody. At least we are still able to do this at all.

Dead Rhetoric: Hamartia is the tenth studio album – take us through the process of writing and recording, any particular surprises, highlights, obstacles, or special moments that occur that you’d like to share? Do you consider the record a logical continuation of the previous Bled White?

Roberts: Starting with the last thing first, yeah – I think it’s a logical continuation. On Bled White we were really conscious of melodies, especially the vocal melodies. We’ve had a focus on vocals to a degree, but from the first album all the way up through Aphotic, it was more about riffs, and coming up with cool riffs and general hooky drum parts and guitar parts. The flow of the music and then Paul would figure out a way to work into that. Starting with Bled White and especially on Hamartia, we took a little bit of a different approach and consciously said, let’s really think more about the vocals. Let’s let the clean vocals become the forefront of these songs – as opposed to writing a song and figuring Paul was going to do a lot of death growling on it, and make clean vocals fit in there. As you can hear on the new album, I don’t know what the percentage would be but it’s probably 70% clean singing- which is way more than we’ve ever done before. It’s just natural, we got to that point where Paul’s voice has come a long way over the years. He’s gotten a lot more comfortable, and to the point where he has some great vocal ideas and doesn’t have to put it behind growling and screaming all the time. I still love that too, but that’s the most natural and obvious continuation from the last album.

And then as far as songwriting. The main thing was looking at the music and saying focus on being more melodic. We aren’t trying to be more commercial or more widely accepted by a commercial audience, we never care about that. It was purely like, we really enjoyed where we went with Bled White where we had certain songs like “The Memory Room” and “The Silent Dark”, melodically, vocally, and let’s do that. That was where it went, it was automatic. All the songwriting process was pretty much the same as the last album, the only difference was Paul waited until the eleventh and a half hour to basically finalize what he wanted to say on the album. There were lyrics I didn’t even hear until he was in the studio, and that has never been the case before. He was writing right up until the last minute. It was frustrating for us of course, because we want to know sooner, but at the same time when Paul writes the way he does, being so personal most of the time- it’s not like it’s just a bunch of poetry he’s throwing out there. I give him the leeway until he has it right, that was the only major difference.