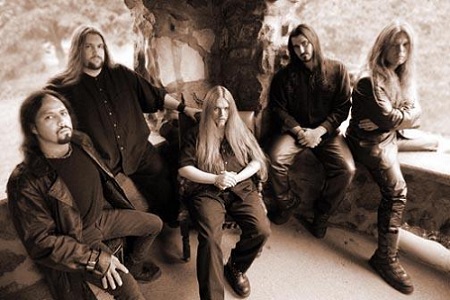 Dead Rhetoric: Tell us the most vivid live concert memory you have had as an audience member, and also some of the best shows in Novembers Doom history?

Kuhr: As an audience member I’ve seen Slayer 18 times growing up, I remember seeing them for the first time they were my favorite band back in the day. I saw Metallica fourth row on the Monsters of Rock tour in 1987. I’ve seen a lot of great shows. As far as most memorable Novembers Doom shows – the first time we played our first European show, it was in the Netherlands on tour with Saturnus and a couple of other bands. Our first European festival, Graspop, Brutal Assault as well. The bigger shows are very memorable, because you are so used to looking out in a small club and seeing the person’s face in the front row as well as the back row, the intimacy of clubs for a couple of hundred kids. Then at a festival of 10,000-15,000 people and you can’t see all the details… it is a feeling of throwing up the horns and seeing all these hands, it’s very powerful and like nothing else. I’m just going to try to kill this and have people remember Novembers Doom – the better crowd response fires us up. We also have shows where only six people show up that I remember very vividly for different reasons (laughs), that’s the one good thing about memories, I remember almost every show we’ve played in one way or another.

Dead Rhetoric: Now is it a difficult process to come up with a live set list, having nine studio albums to choose from?

Kuhr: It’s getting very difficult. Especially now, we just did a show in Las Vegas where we had only 40-45 minutes to play, you want to do 2-3 songs off the new album to promote it, then there will be songs you can’t play. Pale Haunt… is one of our best-selling records, if we played nothing from that album you are going to get some people in the audience that are going to be upset. We tend to start getting bored with certain set lists, but we have to play “Autumn Reflection,” we have to play “The Pale Haunt Departure,” we have to play “Rain,” people are expecting to hear these staples in our set. We need an hour and 20, an hour and 30  minutes to get to everything we want to. We would love to throw in surprises in; we get 40 minutes at Graspop so this is a challenge.

Dead Rhetoric: Have you had the chance to take in the new Septicfesh album Titan as of yet? Speak of your love for this band and any other acts that you feel people need to dig a little deeper into and check out?

Kuhr: I listened to it yesterday for the first time when they put it out as a stream. It’s no surprise, I am a big fan of those guys, this album does not disappoint. I’ve listened to it twice all the way through, and I’m really glad I got to listen to it after we finished Bled White, so I didn’t steal any of their ideas. [laughs] I didn’t become a fan of this band until Communion – it’s just that I never really got truly sucked into it until songs like “Anubis” and I really got into what they are doing. As a matter of fact in three weeks when we go off to Europe, they will be coming by my area doing a headlining show and I am quite upset I will not be in town to see this.

I am an old-school guy, so there isn’t a lot of newer stuff out there that I get into. I just came back from Las Vegas and there was a vendor there that sold old-school death metal shirts, so I bought an Entombed Left Hand Path shirt, Grave –  Into the Grave shirt, Unleashed… that’s the stuff that I grew up on, that’s what I will throw on. I think everybody these days tries too hard to be faster and more brutal than the next guy. You are losing the song when you do that, I feel that way about guitar shredders too. Write a song that I am going to remember, hum, and whistle as I walk down the street. Not showing off your abilities, I don’t need to hear that a drummer can play fast at 300 BPM for an entire album. Show it off every now and then, but I want a good hooky song.

Dead Rhetoric: What are some major things you’d like to accomplish on the bucket list of goals: either within Novembers Doom, your side band These Are They, or in terms of personal accomplishments?

Kuhr: Truthfully I have accomplished every goal I’ve set out for in Novembers Doom. If there was one left it would be to live off the music and that’s just not going to happen. I’m just thankful that I get to travel and play the shows that I do. Everything I put on my bucket list like wanting to film a music video, playing on European soil, a festival, even putting out one CD – I got excited about seeing the physical CD in my hands. I don’t know if I have any real major goals left in the band.

As far as These Are They – I would like to get us on a major festival and people to hear that band live in that capacity. As far as personal goals, I want to raise my daughter correctly. I want her to be better than me in every way, and I want to give her every opportunity I can to achieve that which is why I had to make changes in my life over the last year. I just want to live out the rest of my life pain free and happy.

Dead Rhetoric: What does the next 12 months look like for Novembers Doom in terms of live appearances or activities here and abroad? Are there any special guest appearances on record we can look forward to from member(s) of the band?

Kuhr: Other than Graspop, we have a record release show in Chicago on August 9th, those are the only two things we have solidly booked right now. We are doing a lot of discussing as we want to do more over the next 12 months. But as you know, real life gets in the way and we have to be stronger in our decisions as far as what we can and can’t do these days. Will the decision benefit the band and not lose personal income to do it, that’s what it comes down to. If it’s something that can self-sustain, we will do some show runs, but the right opportunity has to be there.

As far as guest appearances, every one of us has other things going on. I have some stuff in the works, I worked with Dan Swanö on the last Witherscape record, and there is possibly a sequel coming to that that I will be writing on. These Are They – we have a new album written, recorded, and ready to go towards the end of the year. As far as guest appearances on Bled White – there’s one spot where Dan Swanö sings a nice melody back up with me. We will do more collaborating with other artists in the future, we love doing this.