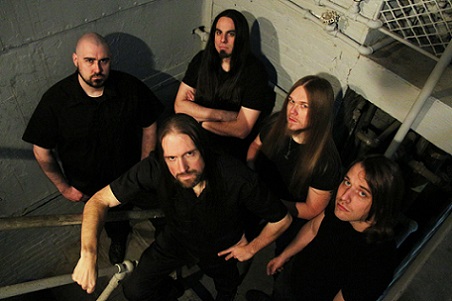 Dead Rhetoric: Where would say Novembers Doom stands in terms of your local Chicago scene versus your national and international impact? Do you think you are given the credit and respect for your excellence in terms of records and performances for over 22 plus years as a band?

Kuhr: If I can be brutally honest? No- we’ve always been that black sheep, even now nine albums into our career reviews come out and we are still riddled with comparisons to other bands, it’s been non-stop. It’s a long struggle to gain that recognition, that’s why a lot of bands don’t last long. We try to put that sort of thing to the side, we don’t want it to bring us down and we keep moving forward with exactly what we are doing. We have a lot of respect from our peers, Chicago is a big scene and a big metal scene, but there are a lot of bands, and a lot of struggling bands. Other than Novembers Doom, Macabre, Jungle Rot- although they are more Wisconsin, but they are local- there are not a lot of bands in our genre in this or hate it again, that sort of thing is the recognition that makes us keep doing what we are doing. It’s things like that- it’s not so much about how many people we can draw to a local show – that is always great, but the recognition comes from the bigger opportunities, where the right people are seeing the work that we’ve put into this and we are so grateful to get these opportunities. We see some of our friends in bands who we think are phenomenal in Chicago and they are being criminally overlooked like we have been for years. We are one of the lucky few who get these opportunities and we do not take them for granted.

Dead Rhetoric: Where do you see the state of metal in 2014? Have you adapted to the changing tides of digital consumption versus physical product which seems to instill a sense of ‘entitlement’ for the new generation of music consumers?

Kuhr: As far as the state of metal goes, metal has been as it has been for as long as it’s been. I don’t see it getting any bigger, or any smaller. It’s a niche form of music and people either love it or hate it. I don’t think you are ever going to have another Metallica- it’s just not going to happen, at least anytime soon. The digital versus physical- I know a lot of people are purists and they love the physical but I really don’t care. I don’t like collecting CD’s and it’s just more crap I’m going to put in a box. I’m going to rip it down to an MP3 and it will be on my phone or Ipod, it’s just more convenient for me to listen to that way. Buying digital media I am fine with that, if I want something for the artwork I will buy the vinyl. The problem is the downloading. I don’t know what is going to happen with the industry, the way it is now it’s broken. Nobody is making the money that they used to, and in that regard bands are not getting the studio budgets they need for the production that they need.

Quality is starting to go down, but things are starting to get easier to record at home. It’ll find a way, it’ll continue on. We are getting less and less of a need for record labels, the record labels could be phased out within the next ten years or so. You can get the same quality at home, and put it out yourself through iTunes or Amazon and make all the money yourself. You don’t need manufacturing and barely need distribution, because there aren’t as many CD stores physically selling the stuff. The record companies need to find a new way to promote and sell their product, because the bands aren’t going to need them very much longer.

Dead Rhetoric: A recent Facebook post of yours from your personal page discussed your disdain for social media- especially in terms of separating the good people from the bad that you thought you really knew. In what ways has humanity disappointed you- and do you think social media amplifies aspects of life that may have struggled to come to the surface in previous generations?

Kuhr: Social media in general is high school, 24/7 no matter how old you get, no matter how far away you get. It gives everybody a soap box, even when they don’t deserve a soap box. It’s a way to spread nonsense and people spread crap without researching it to know if it’s true or not. It just creates these chaotic world.

My problem was I only started with the social media to promote the music and the band, a way to keep in touch with the fans. Along the way, like Facebook for instance, I included my personal life in there as well. I rekindled friendships with people I’ve known since high school, so I’ve got this big mix in there of people in my real life that I talk to on a continuous basis, family, friends, mixed in with the fans on my page. Sometimes that makes things blurred- it gives some people who have no idea who you really are, they’ve never met you before but they get the sense that they know you and they are one of your friends because they are on your page… they start friend requesting my daughter, and sending gifts to my kid. And where I am sure that that is genuine and harmless and you only mean a kind gesture, it’s pretty downright creepy and does bother me and makes me want to pull back from the entire thing and remove myself from it. It is people that you had respect for, or thought you had respect for, and you watch them spout nonsense. You realize that person is not anywhere near as smart as I thought they were. People feel behind the comfort of their chair at home they can say anything they want to without consequence- and that’s just not the case. You still have to maintain your manners- if you aren’t going to say something to someone’s face, you shouldn’t say it online. I don’t know, it aggravates me.