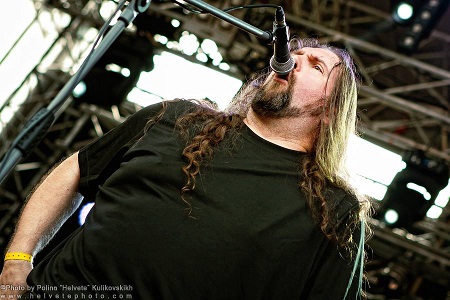 Dead Rhetoric: Do you place a lot of stock in song sequencing to enhance the overall listener experience? Especially when you have longer arrangements such as “Just Breathe” at 7:49 and “The Silent Dark” at 9:28 back to back on the new record?

Kuhr: Absolutely. Originally “The Silent Dark” was going to be track one on the album, we were going to start the album with that and Larry [Roberts] and I are the two that will sit down with all the songs and we will throw song order back and forth to each other many times to figure out the right flow. That’s why things like iTunes and platforms similar to that drive us nuts these days because I don’t think you should be able to buy a single. We put a lot of thought into the flow of an album, for many years there has been a formula. For us growing up back in the day, Metallica with Ride the Lightning or Master of Puppets – those albums had a perfect flow. The album ended with something powerful and epic, but around track three or four you were going to get the more ballad type song. If you look at a lot of the Novembers Doom albums, they follow a very similar formula in terms of flow. We thought this was the perfect flow of the record. We do the same thing when it comes to the set list for a live show, what songs make sense going into and out of. How is this going to flow from beginning to end. We want the experience to be from beginning to end when someone sits down to listen to the music because the songs are so different from each other.

Dead Rhetoric: There seems to be an exploration of clean melodies in more of an avant-garde, almost Pete Steele/ Type O Negative way for the title track, “The Grand Circle” and “Clear.” Can you tell us how much preparation you do for your vocals, and where you decide to use the extreme parts of your range versus the clean parts?

Kuhr: A lot of times I sit down with Larry and he and I do a lot of work on that. I’ll have an instant idea of where I want it to go or what I want to do, or he’ll say “I was thinking of something here,”and it may not be something I was thinking about. So he and I bounce ideas off of each other a lot, we will get together and start to demo things out to come out with the actual vocal melody. There are a lot of times where like “Clear” almost didn’t make it on the record, it came down to literally a week before recording. I couldn’t come up with the vocal melody for that song at all, Larry and I worked on it many times. We went to Vito [Marchese] because he wrote most of that song and I asked him to send me a single guitar line, something that he expected to hear over this and he sent me something that was enough for me to say ‘I’ve got it!’ and I knew exactly what to do from there.

Dead Rhetoric: You’ve always drawn from a lot of personal life experiences and situations for Novembers Doom in terms of the lyrics. What special stories have fans/ listeners shared with you that they’ve gotten from your words? Maybe something that was taken to a different level than even you originally intended?

Kuhr: That is honestly – and it probably sounds cliché and corny to say this – the greatest reward that I have picked up in Novembers Doom is exactly what you are saying. I get messages from people all over the world constantly about how a particular song or a particular piece of music that we created got them through the hardest time of their lives. It truly amazes me and humbles me, the ability to touch people in that way is something completely unexpected and I didn’t see that coming. I was writing these things for myself, it’s my own personal therapy, and I figured if somebody could relate to this, great. But as you were saying, a lot of these songs have a completely different meaning for me than they do for somebody else. Listeners will come to me and explain to me what they thought certain songs were about and how it got them through something, and it makes me see that song in a whole new light. At times I have taken what they say, thought deeper about it, and realize that is what the song is truly the essence of. Even though the songs are recorded, the songs still evolve through these stories from the listeners and what they get out it.

Dead Rhetoric: Looking over the course of your nine studio albums, which ones would you say were game changers for Novembers Doom where you knew either in the process of songwriting or recording that you created something different and special to connect to your audience?

Kuhr: The biggest game changing album for this band was The Pale Haunt Departure. We had just brought Vito into the fold, our old guitarist Eric [Wayne Burnley] had left the band, and we knew it was going to be difficult because we knew there were going to be fans were going to be upset he was gone. We threw caution into the wind and just wrote to see what happens. It opened up a lot of doors when that album came out, it was the start of our popularity in Europe, we got to play festivals like Graspop and Brutal Assault, I think to this day it’s still our best-selling record. That album was a game changer for this band, and we started gaining recognition from not only our fans but our peers. Now other bands started to look up to us, we raised the bar for ourselves. I’m so proud of that record and what we’ve done, we push ourselves for the betterment each record and I hope we’ve elevated things for the genre as well.

Dead Rhetoric: How would you describe the musical chemistry and work ethics for each individual within the band? Do you find it easier or difficult to balance the demands of the band with regular jobs, family, and personal responsibilities at this point in your career?

Kuhr: It’s extremely difficult to balance the band with everybody’s personal lives. This album and the writing process proves that more than any other record. When we wrote Aphotic it was five guys in the room every time we wrote, everybody contributing, everybody throwing in ideas, arrangement ideas and trying 15-20 different beats. Bled White, we were all going through different things in our lives which made it really difficult for all of us to be in the room together writing at one time- this was a little more fragmented. We would get together once a month, three orfour of the guys and bring in riff ideas and songs would start coming together. Just Larry and Barry the drummer would get together through recording, then some of the ideas would change and it made it more difficult in terms of taking longer to write. At the end of the day, it pulled us together in a more unique way- I guess the old saying of too many cooks spoil the pie, we all were able to do more or less our own thing and then get opinions from each other when we would get together once a month as a band to rehearse these things. I had not performed a single one of these songs live until after the album was recorded. We were doing 70,000 Tons of Metal and we were going to perform “Bled White,” and we rehearsed that song twice as a full band before we got it on stage, we played “Heartfelt” live once at sound check before the show.

It’s just about knowing your parts, knowing how you are supposed to be playing, we all did a lot of homework on this album on our own before we put this album together and it’s just the difficulties of life. I went through a rough year with a divorce, Larry went through a rough year with medical conditions; he had a pretty rough surgery and we had a really hard year. It’s surprising that we were able to pull off what we did.