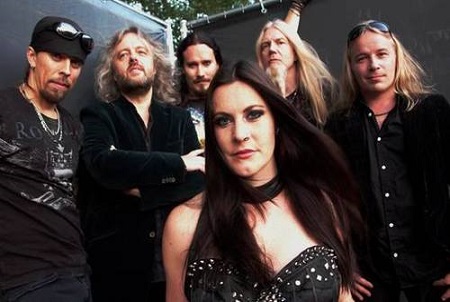 Nightwish will never admit as such, but recently-inserted singer Floor Jansen makes her Anette Olzon predecessor look meek by comparison. Whereas Olzon was diminutive in stature (and according to some, in voice), Jansen is the opposite – tall, domineering, and with a pre-approved reputation that came from her years slugging it out in After Forever. This begs the question: What if Jansen was the immediate successor to Tarja Turunen? Would there have been such a strong backlish? It’s almost like how Robert Trujillo has had a much easier time replacing Jason Newsted than Newsted had replacing Cliff Burton. The third guy (or gal) through always has an easier time…

To coincide with the release of their Showtime, Storytime DVD, the band announced that Jansen, along with fife/pipe player Troy Donockley were now full-time members of the band. It’s the most obvious (and wise) move, putting an end to year-long speculation and setting the band up for what should be a momentous release in early 2015. For the time being, mainman Tuomas Holopainen seems to be willing to just revel in all sorts of goodwill, which frankly, hasn’t been this palpable since Turunen was in her prime. With that in mind, Holopainen phoned DR to discuss all of this, and Scrooge McDuck, because what screams “symphonic metal” more than a Disney character, right?

Dead Rhetoric: Let’s backtrack for a second and talk about your “Flying Dutchwoman” Floor. I know you’ve known her for a while and did some stuff when she was in After Forever, but, what were your first impressions?

Tuomas Holopainen: We did a tour together, I think it was 2003 or 2002, but over ten years ago. I’ve followed her since the first After Forever album, which came out in 1999, I think. I was actually a fan of the band, and still am, and was very impressed by her vocals. When we toured together, I saw her live and it was like a sledgehammer into the face. She had such charisma and was in the right place all the time.

Dead Rhetoric: That’s what I was wondering – if you were able to sneak out and watch her during the tour. Was it also a word of mouth kind of thing?

Holopainen: She’s a really friendly person, but she’s also quite persistent – she knows what she wants to do. She’s also very metal. [laughs] Genuinely metal, and that’s not the most common trait in a female, and I say this in a very positive way. There’s the contrast. She’s very feminine and very sweet…but you don’t want to fuck with her. She’s the Amazon; she has the size and the looks and she’ll punch you in the face if you say something wrong.

Dead Rhetoric: We can always second-guess and wonder, but was she ever in the running when you had the make the singer switch the first time?

Holopainen: To be honest, no. We never considered her because she was doing really well with After Forever at that time and we didn’t want to go into other people’s territory at the time. It didn’t seem like the right thing to do at the time.

Dead Rhetoric: Another hypothetical: She doesn’t have the big shoes to fill like Anette did for Tarja – it’s easier for her.

Holopainen: [pauses] I haven’t thought of it in that way, but we need to always remember to give a lot of credit to Anette – she did her job. I don’t think there’s anybody who could have sung those two albums better than her, but when Floor came in, the transition of the vocalist was unbelievable. It was practically two days she was with us and the fans were going crazy. We got a lot of really good support from them – there was a lot of positive feedback to us and to Floor. It went much better than we ever could have expected.

Dead Rhetoric: You initially said you were going to wait until 2014 to mull over the decision and let the dust settle, yet you just made the announcement recently. Why do it now?

Holopainen: Just practical reasons. We realized we were coming up with the DVD release soon and will be doing a lot of talking, a lot of interviews and promotion and it would just feel silly and awkward not to say things out loud. We knew what would happen already in June or July – we decided, so to be talking to you right now and you’d be asking about Floor, I’d just feel stupid. Because of this DVD release, we decided with the other guys in the band to go public with it.

Dead Rhetoric: That was my next question, if you and the guys had a sit down to weigh your options.

Holopainen: Yeah, but first all, it was two months ago that we would put out the news Christmas Eve morning. It would be a Christmas present for a lot of people that wanted her to stay. That sounded like a perfect idea. On 12/24/13 at 8:00 a.m., we would say “Nightwish has a new vocalist: Her name is Floor Jansen.” But because of this DVD, we made it earlier, just to make everyone’s lives a bit crazier.

Dead Rhetoric: Well, I don’t think goodwill and good vibes around the band have been this high in quite some time.

Holopainen: Well, we’ve had some really good times. Mostly ups, but some downs. For the past year, it’s been just super-cool in every sense of the word. Everybody seems to have found their place and it’s fun all the time. But, we are not taking anything for granted…to keep it like this is going to take some work.

Dead Rhetoric: With Floor, you now have the option to really dig into the setlist. What kind of luxury does she afford you in picking songs you have done in a while, or fan favorites?

Holopainen: When we were entering the festival [season], we asked her which songs she would like to do. We didn’t have too much time to rehearse, but we wanted to take a few more songs into the setlist. She was the one who requested “She’s My Sin” and “Romanticide.” And then I said, “How about ‘Bless the Child?’ We haven’t done that in years.” She said she could do that, and it was just perfect. There’s a potential there when the next tour comes that we might go and dig through the chest a bit.