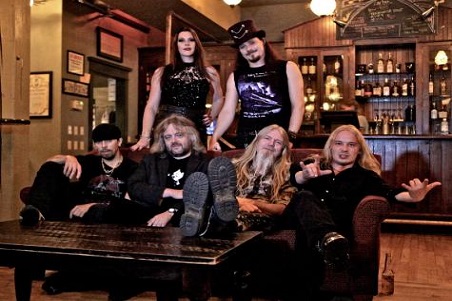 (Editor’s note: This interview was conducted a week prior to Anette Olzon’s departure from Nightwish. Obviously, the context of the interview would be much different had we known what was forthcoming…)

Nightwish doesn’t do anything small. Nor should they have to, given their standing high atop the symphonic metal mountain. Their latest Imaginareum is perhaps their biggest risk of all, a dual album-cinematic release, something according to main man/keyboardist Tuomas Holopainen, has been in the works for five years. If there is a band that can pull it off, it’s definitely Nightwish, for the sheer grandiosity of the band’s overall presentation is picture-perfect for cinema. No pun intended.

The theatrical release of Imaginaerum is going to have the cloud of Olzon’s departure hanging over it, though. We’ve yet to get the specifics as to why she was booted, but it probably has something to do with her track record of illness and near show cancellations, and as you’ll read below, the show always goes on with Nightwish. Now it goes on with former After Forever/current Revamp siren Floor Jansen.

Before all this transpired, we caught up with a relaxed and easy-going Holopainen via telephone prior to a show in Columbus, Ohio. Read closely to some of his answers, for they’re oddly prophetic…

Blistering.com: You’ve made your mark in Europe, but in terms of this tour, it appears that attendance has been strong and reaction has been enthusiastic. Are you surprised that after not being over here for so long that this is happening?

Tuomas Holopainen: I’m satisfied. You try not to think about it too much, you just go out every night and try to make every night count, that’s the rule. We saw some glimpses in the beginning of the year when we played a couple of shows in L.A., then did the heavy metal cruise [70,000 Tons of Metal] as well. Then tours in Finland, tours in Europe, and the response has been really enthusiastic all over the world. We had a lot of confidence coming to North America and it’s really paying off.

Blistering.com: You’re not here every year like some European bands, so I think we take those for granted. Nightwish coming here is an event, basically.

Holopainen: We like to put a lot of effort into quality, instead of quality, and that goes with the live shows and the albums.

Blistering.com: I read that for the first show of this tour in Atlanta, Anette was very late and almost didn’t make the show. In those situations, is there a plan B? Do you go on with the show? What would you do?

Holopainen: You can’t in those situations. It was a really scary situation. She had such a bad stomach flu that she couldn’t fly. She actually flew into Atlanta three hours before the show started, so it was cut really close. I’m happy we made it and no harm done. But we don’t really have a back-up plan [laughs]. We would have had to cancel the show if that would have been the case.

Blistering.com: Marco [Hietala, bass] can do some of the vocals, but there are some he wouldn’t be able to do.

Blistering.com: Can you compare Anette on this round of touring to when you first had her out after Dark Passion Play in 2007?

Holopainen: She’s more relaxed. There’s nothing to prove anymore. On the first tour, no one knew her, so people came and tried to see what’s like and all that. Now, people can concentrate on what’s really important, which is the overall show and not just her and her voice.

Blistering.com: On those initial tours with her, were you skeptical as to how she’d do?

Holopainen: We weren’t really scared at any point. We have a lot of confidence in the whole concept of Nightwish and the way we think is that it’s a carousel or vehicle that can’t be stopped by anything. That’s the way it goes. We can’t let anything stop it.

Blistering.com: For this tour, you’re doing 90 minutes. What was the thought process in terms of picking the set?

Holopainen: The most important factor was that “Let’s just do the songs we feel the most inspired by to play.” That’s why we cut out the song “Wishmaster.” It hasn’t felt right to play in years. I don’t know why, but it’s not fun to do and maybe that’s reflected on the audience. So we decided to do the songs we really love to play, and that’s how the setlist was formed. We also put some emphasis on doing a show that’s less “rock ‘n’ roll” and more theatrical so there wouldn’t be that much talk and diversion between the songs, like “Hello Cleveland!”

There’s very little talking going on between the songs so we can keep the setlist going on and on. And we’re not doing any encores, so after the outro and the bow, that’s it. It’s like doing a theater performance instead of a regular rock performance. I have nothing against rock and that kind of show, but I think it’s never been the greatest strength of Nightwish. We are more in the theatrical side and that’s what we’re good at, so let’s keep emphasizing it.

Blistering.com: Some of the bands that came up through the 80’s will really milk the encore thing. I saw a band a few months ago do three encores.

Holopainen: It’s just about trying to avoid clichés. When you think about it, it’s like “Thank you, we’ll see you sometime in the near future,” but then you come back. It just doesn’t feel right. We used to do it all the time too, but then we thought it was really unnecessary. Like I said, it’s about avoiding clichés [laughs].

Blistering.com: “I Want My Tears Back” is probably the best song on the album, and when you play it live, you bring Troy [Donockly, uillean pipes, tin whistle] out. How is it going over?

Holopainen: If I had to mention one song out of the new album that’s a really killer to play live, it would be “I Want My Tears Back” by far. It has already become an audience favorite all over the world for some reason. Maybe it’s the uplifting spirit, or Troy’s parts, or the “danceable” C-part…I don’t know what it is [laughs]. It’s a lot of fun to play and people like to hear it. I think we’re stuck with that song until the end of our career, which suits me fine. Also the fact that Troy is with us the whole tour…he’s almost like the 6th member.

Blistering.com: That was my next question. Do you ever see his role expanding?

Holopainen: He’s excellent. He’s gluing the band a bit more together both as a musician and a person. It’s a bit hard to imagine a Nightwish show without him anymore, or a Nightwish album. I think he’s going to be there until the end of the band. I also think we won’t make him a full-time member of the band because marriage has ruined many, many good relationships [laughs].