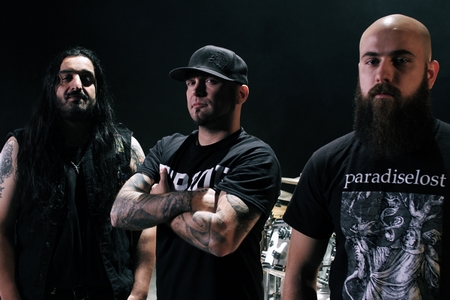 Since the beginning, Nightrage has been a band many view as a “gold standard” when it comes to melodic death metal. Quickly making a name for themselves with high-profile members such as Tomas Lindberg and Gus G, the band’s take on the Gothenburg sound has not diminished over time, despite frequent changes to the line-up. In fact, one could argue that the one consistent thing about Nightrage is how compelling their music tends to be with each release.

The band’s sixth effort, The Puritan, will be released at the end of this month. Touting the same, untainted approach to melodic death metal as their previous releases, it’s sure to give many a great deal of satisfaction. With a number of new items on the table (singer, record label), founder and guitarist Marios Iliopoulos had plenty do discuss with us, as well as giving us an insider’s perspective of the melodic death scene.

Dead Rhetoric: There are a number of new pieces in the Nightrage puzzle this time around. Let’s start first with the latest vocalist change. What happened with Antony Hämäläinen and how did you find Ronnie Nyman?

Marios Iliopoulos: Antony needed to leave because he proved to be the wrong guy to have in the band. We lost contact and on a personal level we lost our trust and friendship. I feel that I did everything that I could do for him, and tried my best but in the end of the day that was not enough. I can tell you that it felt relieving for me to see him go because he actually created a lot of troubles on the Nightrage camp. Luckily, through Jesper Strömblad, we found Ronnie Nyman from Always War, a friend of Jesper’s, and immediately we clicked together. He is a guy like us that loves to play the music, an amazing singer and frontman on stage, and a good calm and nice guy out of the stage. He has been in the business many years; he knows where Nightrage is coming from and he also knows that this game is not easy. You need to sacrifice a lot of your personal time and invest a lot to make this band a strong unit giving everything you got. Thing is that we gave Ronnie this chance and he really claimed and earned his position to be in the band on the Japan and Russia tours we did together. I mean the guy he is a sort of hero for me when he announces us that he is quitting his day job to be on the Japan tour. That for me was a super positive sign that he is the right guy with the right attitude to be the frontman in Nightrage, without asking for ridiculous things and only be there for the love of the music.

Dead Rhetoric: Nightrage has suffered a number of line-up changes over the years. Do you ever feel that the changes have hurt the momentum or profile of the band?

Iliopoulos: Well I know that we had some crazy changes so far and also that it´s definitely a setback when you are trying to build a good fanbase and a good connection with your fans. But I also feel that Nightrage is stronger than that, our motto is to never give up and always follow our instinct. So far I feel that we have managed, releasing good albums and maintain having a good solid piece of music, so in that aspect I don’t think that we have ever let down our beloved fans. I mean, if it was up to me, I would love to have the same line up forever, but you see people change and have other ideas and also sometimes they see Nightrage as a stepping stone to walk all over us and try to build their own careers. I understand that the path that we have chosen is sort of demanding, and maybe discouraging for some guys, but that’s where the power of Nightrage is coming from, be yourself, be honest to yourself, and to your music and never give up. Always follow your dreams and play music from the heart.

I feel as a band right now that we are on the best place that we have ever been. I don’t think that so far we have failed losing the connection with our fans, in the end of the day everybody knows me and that I´m here from the very start and they love to see that I´m still doing it, and encourages me to keep it up. Nightrage will carry on no matter what, as far as we have something to say. For me, Nightrage, it´s an idea, and also now with this line up, with Ronnie Nyman and Anders Hammer, I feel that we are on the best position that we have ever wanted to be, and the best is yet to come.

Dead Rhetoric: Does it ever get discouraging to deal with the ins and outs of member changes?

Iliopoulos: Yeah that can be really annoying when, especially on a personal level, I have given my best to try to keep everybody happy. But it´s a learning experience for me as well and those kinds of things make you stronger anyway, and I know for a fact that all those kind of people tried to jump all over me and wanted a piece of me. It takes a lot of energy to have to deal with situations like that, and I think that in the end, all is happening for a reason and for the best interest for the band. If we have to act like those people, if it was for those people, Nightrage will be dead today, so we needed to move on, they needed to step out, and we are leaving everything behind, no hard feelings in the end of the day. I mean this is music, it´s not like a war or something. You play music with your friends to have fun, but it´s also kind of funny how people can react being a bit insidious, just begging to be famous and make it in the business.

I used to have a lot of people in this band in the past, that their only concern and their only hope was making a lot of money and be on the frontline, at least that was what they wished for after all. They don’t understand that they are in the wrong business if they wanna do that, and that u need to work really hard and be patient until you reach certain goals. And the goal here is not the money, and the girls [laughs], it’s just to be creative , making the best music you can, and connecting with your fans. It´s all about the music. Why people forget why they are doing this in the first place, that it´s a mystery to me.

Dead Rhetoric: What keeps the creative juices flowing this far into your career?

Iliopoulos: Life itself, the ups and downs, the everyday struggling, things that you really wanna say and you can’t through talking, music takes that role for us. We want to feel inspired and excited and love the stuff that we do. I´m very happy with the songwriting on The Puritan. We managed to keep the Nightrage sound and also make simple arrangements and songs. Thanks also to Daniel Bergstrand and George Nerantzis from Dug Out studios, working their asses of and giving us an amazing sound.

Dead Rhetoric: Also on the new category is your label, Despotz Records. How’d the deal come about?

Iliopoulos: I found Despotz Records by searching on the internet actually. I saw this female band that once lived in Gothenburg, Crucified Barbara, who are on Despotz Records and I thought, why not drop an email to their label guys? In fact, we had contacted many labels and we had some discussions, but with Despotz it felt that they really liked our stuff from the very start and we clicked. I mean it´s a new label but they are very serious and professional in what they are doing. They have really good plans, and also they gave us a really good deal that we are very happy with. So far everything going very smooth, we have mutual trust, and they keep delivering all the stuff that they had promised to us, so I can tell u that we are very excited to have to work with a label like Despotz Records that is also based in Sweden/Stockholm. And that’s another positive factor, since we are also based in Sweden, that makes things easier and also we have great communication at all levels. Can’t wait for all the great things that are coming in the future. It´s always cool to have to work with people that understand the business, they have both feet on the ground, and they are working hard to achieve greatness.