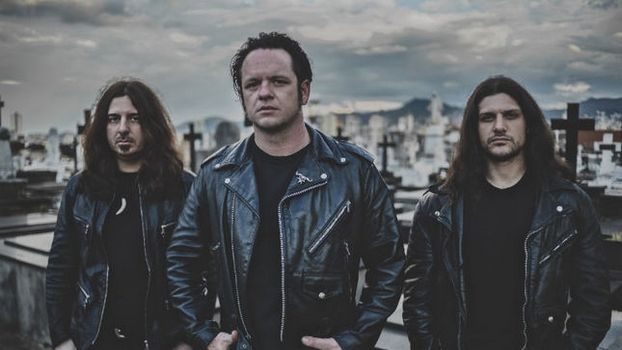 Dead Rhetoric: How do you see the state of social media in terms of branding and promoting for metal bands these days? What measures does Night Demon take to stand out from the thousands of other bands that via for limited consumer attention?

Leatherby: It’s a tough thing, a double edge sword. I’m not a huge fan of it, I’m a big fan of information- people being able to be informed about everything that the band is doing. I do think there are a lot of people that have opinions that hide behind their keyboards and computers. It’s changed the state of things. I think people try to influence people more so on what’s bad than what’s good. Especially with sites like Blabbermouth, you end up having these heavy metal tabloids- and that’s the opposite of what we need. That’s not what anybody is about doing this kind of music. I get that there is clickbait, they are trying to get interest and sell ads to draw on some controversy. As far as regular social media channels for us- we use it to keep our fans motivated, to keep them in the loop and informed.

There is so much bullshit that happens on a daily basis, whether it’s like issues with labels, distribution, you run out of gas on the road, you have a blown tire- you have nowhere to sleep. Those are the things that we choose not to talk about publicly, we don’t need to. We’ve put ourselves in this situation, and it’s up to us to figure out ways of keeping this thing alive. We choose to talk about the good- there are so many awesome things we are doing, some days there is just too much to post. It would be a sensory overload. I have loved the age of information- being younger and not having the internet and being starved for all these things in white suburban America, I would read about bands years before I ever heard them. It was crazy- I knew about the bands, but I couldn’t get my hands on the records. Social media is great for that, you are able to expose yourself to pretty much anything you want, and catch up on things you missed. It’s a good tool for older bands that may have slipped through the cracks and can get exposed again for free really. It’s the way the world works, we have to adapt to whatever ways people are getting information.

It is a pain in the ass sometimes because there are so many different channels, Facebook, Instagram, Twitter, our website, our mailing list, the labels have their channels, and so on- there are fan sites now. People doing that helps us a lot. We try to spread out all the information we can when we have it, and hopefully people will see that. You are pretty informed, but there are journalists sometimes who didn’t do their research and could have found the information out there. Our touring history is available. We don’t want to be dinosaurs, even though we love old school traditions our fans still love that. We put out music on every format, you have to do that or you just get lost. Without progression, we wouldn’t even have streets, we would be living in the Wild, Wild West. You have to figure out new and creative ways to do things as things change- there’s nothing wrong with that. The newer generation that doesn’t know the old school ways, they don’t care. They are totally fine getting the information the way they want to get it.

Dead Rhetoric: Besides Night Demon, you also run the Frost and Fire Festival, manage bands, and have been recruited to join Cirith Ungol and Jaguar. How do you juggle these responsibilities while maintaining any sense of normalcy/sanity? Do priorities shift depending on the needs of each endeavor?

Leatherby: Not really- the priority is Night Demon. It’s always been, and it’s with that understanding that I can do other things. With Jaguar, those guys were just ready to fold. If they could work around my schedule, we could make some things happen. And they are cool with that, and the same with Cirith Ungol. Cirith Ungol refuses to play without Night Demon- and I try to tell them that this is not always going to be the reality. (Vocalist) Tim Baker’s son Matt, he rehearses with the band on bass while I’m constantly on the road with Night Demon, so there is somebody there. We are solely responsible for them being a band again, Armand has helped with the tech work. Not that they feel lost without us, but there’s just a comfort level and being family- they want to enjoy it with us.

As far as the festival is concerned- that thing has totally taken on a life of its own. I would say out of the three things you mentioned, besides Night Demon, that is the one that if anything takes up time, it’s that. We’ve had to turn down some tours this coming fall because of the festival. We always want to make ourselves available as a band to do what’s necessary for us first. With the festival, it wasn’t anything that we planned- we didn’t say we were going to create the best festival around, and this is what our focus is. We had played so many festivals around the world and we had seen what was great about some of them, but didn’t work about some of them. I have a long background in concert promotion so I thought that there was nothing out here on the West Coast, we need this. When you have people leaving saying ‘this is the best weekend of my entire life’. You see some guy coming from Norway, it’s October and he’s on the beach in Southern California, thinking this is where it’s at, watching his favorite bands perform – we feel a responsibility to the scene and the community to facilitate this thing.

If we were to stop, it would be a completely selfish move on our part, and I don’t think we would be doing anybody any favors except ourselves. We do have plenty of opportunities to do everything that we want, year round. We’ve accepted our fate, doing the good thing and fighting the good fight for the future of this genre is more important than what Night Demon gets offered as far as that goes. We have to plan these things over a year in advance, so we are locked into it- and it’s not like we can’t be there for it! These are first world problems- I’m not complaining about it, I’m just saying this is the reality of these situations. In 2018, I hope to have new records out from all of those bands, and hope the festival expands too.

Dead Rhetoric: I wanted to discuss a particular quote I read in another interview for Enfocus magazine. You stated ‘people don’t care about your money or luxury or how you are living, all they care about is your art and the product you put out and your performance.’ Can you elaborate a bit more on how that shapes everything you do to get Night Demon into people’s lives on a long term, legacy level?

Leatherby: The first thing that you quoted me on, I don’t remember that interview specifically, but basically what I think I meant by that was… there are a lot of things happening today that are obvious cash grabs by bands. A lot of complaining and laziness going on, everybody says that rock is dead, you can’t tour anymore, there’s no money, there’s no tour support, there’s no label support, there’s no nothing. And it’s impossible to do this without things like crowdfunding, and things like this. I’m a fan of crowdfunding for independent ventures, completely. But you can see when things are obvious cash grabs. When a signed band uses crowdfunding, they are being paid by somebody to make an album, and that company is distributing that album. Why is the band going out and asking for more, and inflating the price on stuff?

The fans do want to be involved… and that goes for paid meet and greets too. I get both sides of it, as far as we are concerned we went on our first tour with Raven, we were unsigned and we had $500 to our names and did two months with them and came out ahead. Took that leap of faith without a net, we calculated what it was we needed to do- is the band good enough, is the stage show good enough, is the merchandise good? My whole point behind that is when you put out a quality product that people are a part of and buy into, that’s what keeps us going. If we can’t, we need to raise ourselves to a level of making things better. People don’t care about your status or how much money you have- literally I am homeless, I am not kidding you. I don’t want sympathy from anybody- it’s a choice that I had to make, and it’s well worth it. You stay away from home so much that nobody would want to hire you (laughs) for a job.

I’ve followed the touring history and the album cycles of the greats- Iron Maiden, Slayer, Metallica- bands that did that. Cirith Ungol in the 1980’s they never toured, or went for it. They didn’t know how. We try to figure out any way we can, and by creating this momentum- we get asked to do things all the time, and when we don’t we just make things happen ourselves. Everything has a reason for it- it’s not just a band going out and playing. There’s a reason for every tour, there’s a set list for every tour, the real fans love that. We had a comic book based on the last record, we are doing this mini-movie for this thing. We’ve created this Night Demon world- it’s not centered around the individual personalities of the band, it’s this idea of rock and heavy metal. Everything that is cool to us and the people that love it. We are just trying to stoke those fires and keep this alive for the next generation.

Motörhead is gone, Judas Priest is going to be gone soon – and somebody needs to be here to fulfill that. Just like the festival, the mix tape that we did, we are trying to bring other bands up to. We are not here to compete- we came to inspire. We don’t want to be the only ones, we need more of this. The song “On Our Own” is pretty much about this theme. We do get a lot of help from people. We are not here to gouge our fans, because I know they’ll pay. I’ve seen bands do crowdfunding to try to get a van- if you need a van, you need to tour. For me personally, we had to find every way possible to make that happen for ourselves before begging the fans. It’s a prideful thing, there is always a way to get things done, you just have to work for it and continually brainstorm and think about new, creative ways to do things. You think all the ideas of the world are taken- they are not. You have to focus and believe you can keep doing it. If you fail at something- we make bad decisions all the time- we just try to learn from them and not make them again with the experience that comes with that. That’s why I got into management – I learned a lot from the old school guys about what not to do.