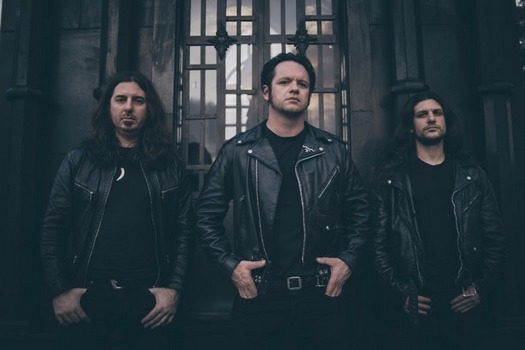 They say you have forever to put into the first album – but roughly half to a quarter of that time to make the follow up. Ventura, California act Night Demon knows all too well the rigors of the road – touring for two solid years behind Curse of the Damned in North America, Europe, and other parts of the globe. With Darkness Remains, the trio stride valiantly into familiar true metal territory – ensuring maximum headbanging and sing-a-long refrains as the hooks grab you and never let go. Just like many of the band’s early heavy metal heroes from NWOBHM to America, they aim to give the current generation something to hoist high, play loud, and become the album to champion decades beyond its first exposure.

Catching up with vocalist/bassist Jarvis Leatherby on the phone in Nebraska as they continue a round of tour dates with Anvil, it’s another engaging conversation into the making of a new record, a strong appreciation for the world of Iron Maiden, Jaguar, and Cirith Ungol among others, plus calling out the veterans to take responsibility for the future of this genre. Take it away, Jarvis…

Dead Rhetoric: Over the past year, you’ve had a significant lineup change while continuing to be road dogs. What circumstances took place for Brent Woodward to leave and Armand John Anthony to enter on guitar, and how do you feel you and Dusty have handled the adjustments?

Jarvis Leatherby: That’s a question to really ask Brent. I don’t want to get into anything specific, it wasn’t anything crazy. This lifestyle is insane- this much touring and doing this kind of stuff, essentially being homeless, which we’ve had to deal with. I think that had a lot to do with this, he felt that he had accomplished a lot of what he wanted to do musically. But we roll on. With Armand coming in, he’s been a part of the band since we started. We actually wanted to be a four-piece in the beginning, and we asked him if he wanted to play second guitar. He went on to do other stuff, and he actually wondered if the band was going to go anywhere. (laughs). He helped produced the first EP and Curse of the Damned- he helped write a lot of the guitar solos on that stuff, I actually played half of the guitar solos on Curse of the Damned, and not a lot of people know that. I’ve known Armand for over 20 years, he’s the brother-in-law of Dusty, it felt really good and natural. If it was somebody else, I don’t know how well it would have worked and how soon after we would have replaced Brent. It had to be kind of him or nothing- which kind of sucks because Armand had just started Gygax and we really liked that record and those guys. I guess it’s never good timing- the adjustment has been good and it’s been fun. We are having a lot more fun on the road- it’s been over fifteen months now since he’s actually joined the band.

Dead Rhetoric: Are you content to stay as a trio or would you entertain the possibility of adding a second guitar player?

Leatherby: At this point, we are content staying as a trio. It’s kind of funny that you asked that, because we were talking about this the other day. The only way it would jump up to that as a four-piece, it would have to be an undeniable thing where we knew somebody who has to be in this band. We aren’t looking for it musically, it’s funny- we did want to start as a four-piece. When we started we were the only three guys besides Armand that we thought really understood what a band like this is supposed to be musically. We are not a band that is trying to reinvent the wheel musically or stylistically. It’s been a blessing to be a three-piece because we have come up with our own signature things, being somewhat innovative because of our limitations. We do a lot of harmonies between the guitar and the bass which is rare. That is one of the beautiful things that came out, to make the most out of the limited people that we have in the band.

Dead Rhetoric: How important was it for Night Demon to take a risk and become a part of a non-traditional metal tour across North America with Carcass, Crowbar, and Ghoul last fall? Do you see that paying big dividends for an audience that may not normally be exposed to catchy, classic-oriented metal?

Leatherby: Most definitely – and that’s a great question. The Carcass guys came to see us I think in Chicago. We were opening for Manilla Road and Raven- our merch guy came up to us after the show and told us after we played that the Carcass guys were here and they bought a bunch of merch. We wanted to see if they were around and say hi, but apparently, they had already left. A couple years later, we get a call from them and they wanted us out on this tour. Oh man, that’s great! We were not afraid to do this and give this a shot. It actually turned out really, really well- much better than I thought. The thing that I realized is old school fans of metal and people into extreme metal, they see us and they say ‘ok- I get this’. I cut my teeth on this stuff, even if I listen to grindcore or whatever. The young kids, to them it’s like a whole new thing. It’s not throwback at all- its heavy, its melodic. Their first favorite bands were already screaming at them. It was nice to see the differences between those two audiences- and we did really, really well on that tour. The sales really proved that, the camaraderie between all the bands was very good.

Dead Rhetoric: The new album Darkness Remains takes Night Demon to another level in terms of catchiness, melodies, harmonies, and solid songwriting. How did the songwriting and recording go, and how do you feel about this record in comparison to Curse of the Damned?

Leatherby: Well, we recorded the album in one week. It’s the same approach of recording things live. If anything, we spent more time on the sound, getting the right sounds on there so that we wouldn’t have to do other takes. We wanted to have the record be more representative of how things are live. The production has a much higher production value on this one. Armand being a great guitar player, he has a lot to do with how this sounds. When we were like 14, I knew he was great. He lives with a guitar in his hands. He’s played a lot of different styles through the years, he takes influences from many different styles.

Dead Rhetoric: I’m curious to know more behind a couple of specific songs on the new album – let’s discuss “Maiden Hell”. How much of a challenge was it to get all of those Maiden songs and references into an under three-minute song – and what specific benchmarks stick out to you regarding Iron Maiden (albums, shows, etc.)?

Leatherby: I’ve got to say, it was the easiest of any of them. It was the first song that I wrote lyrics to. Actually, I wrote a few sets of lyrics before the music, I tried to take a different approach on a few of them. There’s a three-part story – we can talk about that later. “Maiden Hell” was a spark that started me lyrically on the whole record. I wrote that song in about 35 to 40 minutes. I wanted to write a song about Iron Maiden, I wanted to write a tribute to them so I just started writing down all these lines. At first it was too literal, it was coming out pretty cheesy so I started pulling out my vinyl and I knew the story was there. I tried to go in chronological order, the story of the band through the listener’s point of view. I wanted to write a song that everybody who loves Iron Maiden and everyone who loves heavy metal can almost go back to when they first heard the band and just listening to these records. I had to put a spin on it too, I wasn’t picking random song titles and just singing the titles. I had to change some of the titles to have it make sense lyrically, you know? My favorite line in it is ‘came out of a blaze to find a brave new world.’ (laughs). I didn’t mention any of the songs off the two Blaze-fronted records, although I do like those two records and I did see the band a lot on those two tours.

It was great because I was in high school then and they were playing theater size venues, I would be right up there in the front row. It was great to be able to experience that, they say rock is dead now, well, metal was dead back then- it was like dad rock. I would see bands like Fear Factory and Coal Chamber opening for Iron Maiden. You could tell that a new era was coming in for sure. Just like I remember the first time I saw Korn opening for Ozzy- I wasn’t into it but I knew right then and there that something new was going on. Maiden is the gold standard- they’ve proven that, there’s something magical about that band. When people always asked Priest or Maiden- I’m always going to say Maiden, but I do love Priest. For some reason with Maiden it’s special to me, I will listen to any Maiden album, and there are some that are obviously better than others. I think it was important for us to do that, and it was cool that I did it on a song that musically sounds least like Iron Maiden. It wasn’t a song that was inspired by Maiden musically at all. This makes it a standout track, a fun song – we aren’t trying to gain any attention from that, it is a tribute to the band. It’s meant to be nostalgic and enjoyable for everybody that is out there like me that grew up with Iron Maiden. I want people to feel like they wrote this song. I’m just a catalyst here.