Night Demon – Firing Off the Blueprint 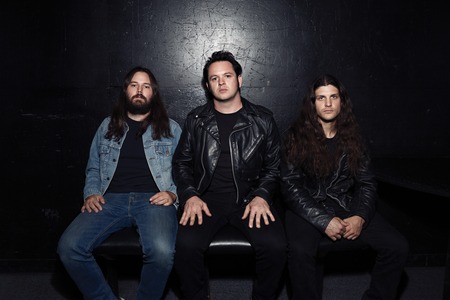 Nicknames abound for Ventura, California’s Night Demon, depending on when you catch the band. I’ve heard Fight Demon when it came to a particular difficult exchange with an unruly fan in Canada touring w/Raven – only to become Nice Demon when bassist/vocalist Jarvis Leatherby tried to rectify the situation between sets with said fan who was escorted out of the club. Undeniable as well is the trio’s determination to bring their old school brand of traditional heavy metal to as wide of an audience as possible. They aim to prove that this style has never died, and can gain long term appeal for everyone from their teens into their later years.

Getting the chance to take in multiple shows over the past 6 months for Night Demon (including two headline shows in New England in May) in support of their full-length Curse of the Damned, I figured it was as good a time as any to speak with bassist/vocalist Jarvis regarding their blistering, crisscross touring escapades, and we also got to discuss a few of his thoughts on band performance, band chemistry, and of course the NWOBHM in the process. This is one of my more enjoyable chats as of late, the 30 minutes seemed to go by quickly.

Dead Rhetoric: So this is the third North American tour Night Demon has been a part of over the past seven months. How do you feel the band is adapting to touring life considering how things are going in the scene – as it seems like you are putting together a lot of DIY tours?

Jarvis Leatherby: I would say things are pretty good. We’ve never lost money on a tour, which I think is always a good thing, a rare thing for an unknown American band. We’ve tapped into the heavy metal community, we know most all of the bands in the United States that are kind of doing what we are doing, so it’s easy to calculate that, go to those places and play to those fans. We are still discovering more. It’s basically like we’ve put ourselves in this position where we have to do it, so we just make the best out of it. It has been difficult but not really anything that we would complain about. It’s more rewarding than everything. It is kind of funny when outside people think that our band is big- it’s all relative to the area that you are playing in.

On a worldwide level the scene is still underground but it’s very connected in a way through the internet. We definitely have our name out there, but there’s still a lot more work out there to do. There’s a lot more to go, but now we are at the point where we don’t even count the days anymore, life is just how it is and it’s a lot more enjoyable because we’ve done enough tours where we’ve gone away for long periods of time, come home and experienced that.

Dead Rhetoric: When it comes to the stage presentation, you guys try to put on more of a theatrical stage show, especially in terms of lighting, backdrops, having ‘Rocky’ the mascot on stage- has that always been something you’ve wanted to bring to the table for Night Demon to make things a little different from the average, live performance?

Leatherby: Yeah, I think so. I can remember back to our very first show, we had some samples up there with the songs, we had smoke machines- and this is when we only had the first four original songs. We had some lighting, I had a guy in a local club and I would give him cues as to what I wanted for certain parts of the songs. I definitely think the visual aspect is building up- when we first went over to Europe, we didn’t have anything, we didn’t even have good equipment, so that was a really stripped down version of the band. People liked that, and the band is raw enough as a three-piece that that works too. We want to set ourselves apart and bring in more of a show- especially when you are a headlining band, you want to be worthy of the headlining slot. A lot of times we will go into a smaller town and play, the bands will be great, but when we hit the stage the night just transforms into something else. That’s kind of what we want to do. Not that we are trying to outdo bands but still like… it’s a friendly competition.

Even when we were touring with Raven, we love those guys and I would watch their whole set every night, but there are times when the attitude is ‘let’s blow these guys away!’ We played with UFO in Germany, and those guys are really cool with us. The mistake is though, they didn’t watch us play. They sat on the bus and then came to do their show. We benefited from that, because there were a handful of Night Demon fans, but there were a large number of UFO fans who had never heard of us and we gave a balls out performance for 30 straight minutes. They came out and opened with “Lights Out” and were playing ‘guh-guh-da-guh-guh-da’ at groove speed, it wasn’t close to what you hear on “Strangers in the Night”. So bands that watch us play, they’ve benefited because it just makes everybody better, try to push them harder. When we are a support band on a tour, we want to earn that respect of people from the fans. You get burnt out on the road, you aren’t always in the mood but you have to be in the mood once you get up on stage. That’s what we do, we constantly communicate and talk before the show, this is why we are here, the hardship is for this moment. We play it like it’s our last, you just have to do that. In regards to the theatrics, I wouldn’t say we are like Alice Cooper, the set does have a flow to it, it is planned but we call audibles every night. We don’t want to be a Gwar or a Kiss, but we do want to have a reputation for being a great live band. It’s still all about the music, if you don’t have the songs then all that stuff doesn’t matter.

Dead Rhetoric: How important is band chemistry in the development of a band?

Leatherby: It’s huge. One of the most important things. I’ll even say that before we got Dustin in the band playing drums, there was another guy that we wanted that would have fit the band even better than him- I’ll still admit that today. His personality would have been impossible to do this thing- it would have crashed and burned the day we started. It’s unfortunate, he would have added a lot to what we are doing musician chemistry-wise. I didn’t even want to toy with it- you have to trust your instincts with this stuff. Especially as guys- women listen to their intuition, but as guys we don’t. We think I can make this work, if it feels wrong it’s because it is. The reality is it’s a lot more than just that hour out on stage, there is another 23 hours in the day, moving forward, business decisions, career decisions- and anyone who is eager enough and wants to do things bad enough can become what they want to be.

That’s what we have with Dustin- he’s a great drummer, no doubt about that at all. I think the chemistry is really important, mentally being on the same page is really important. We talk about things all the time- people say all the time that we are such a tight live band, (but) we make adjustments every night. We watch film, it’s almost like a sport, and we go over stuff. We try not to be too contrived, I mean there are certain things that happen nightly. That happens naturally, there are certain things that stick, but we don’t get it down to the point where every step is choreographed or anything like that. I know Kiss had a lot of that, and I respect that – they worked hard, the one way we relate to Kiss is that we have a plan. We knew what we wanted to do when we started and we still know where we want to go in the future. A lot of bands fall apart because they have no solid plan or direction- or they go into it for the wrong reasons. Sometimes people get into this to be famous- if you want to be famous, don’t play heavy metal. If you want to be famous in heavy metal, it comes with an even bigger price, because you don’t have this big infrastructure around you to protect you. We are in a lot of uncomfortable situations right now because we are exposed and here. There are diehard fans that are really cool, and there are some that don’t like us. They just punish you- there is a certain line and it’s hard to draw it. This kind of music is about loyalty, and the fans loyalty for heavy metal is unrivaled compared to any other genre. I’ll take that over being a celebrity, that’s not anything we have ever really been interested in. We want to make a comfortable living and be respected- a lot of things we do are concerning our legacy and what mark we are going to leave. We are living our childhood fantasies – but when the heavy metal book is written, we want to be in that book as an important contributor to the conversation.

That’s tough, because we are not the most original band- I mean we are original in the sense that we write our own material, but we play music that we like and a lot of it… I hate to label the band, but any labels that anyone has put on us, I’ve always accepted. I’ve never said we are not that… if they call you a thrash band and you play thrash music, just accept it. I’m cool with whatever anybody thinks about us to be honest with you. People say we sound like Motörhead, some people say we sound like Diamond Head, some people say we sound like Black Sabbath- and that’s okay because I love all of that stuff. We are influenced by all these bands, and I notice that a lot of reviewers have said about us that its rehash in a way and not anything ground breaking and new, but you can’t really put your finger on stealing this from that.