Progressive metal has peaks and valleys in popularity. Such is the circular nature of an ever-changing musical landscape – as well as listeners who need to invest time, energy, effort, and finances into a genre that features complexity and intricacy at its core. Italian act New Horizons hope to gain attention through their stunning debut full-length Inner Dislocation, recently released on Revalve Records. Embracing a philosophy that can feature grandiose musical interplay a la Dream Theater or Symphony X one minute, then be very melodic and hook-oriented the next, it’s these push and pull elements that keep songs such as “Where Is The End” and the two-part “Borderlands” saga enticing and exhilarating.

Firing off a series of questions through cyberspace, drummer Federico Viviani and keyboardist Luca Guidi provide answers regarding the challenges of finding the right lineup for New Horizons, their outlook on songwriting, the process behind their video shoot for “Born in the Future”, and thoughts on the challenges of developing appeal domestically in venues that struggle to gain proper patronage even if the internet ‘fan’ number support says otherwise.

Dead Rhetoric: What are your earliest memories surrounding music growing up? How did you make the progression into heavy metal and eventually the desire to pick up an instrument and start performing in bands?

Federico Viviani: I remember that since I was a child I loved to listen to music, in particular 80’s pop music (Michael Jackson for example). At the age of 12 I received the album Powerslave by Iron Maiden and I thought ‘Wow! This is incredible!’ And I have loved heavy metal ever since!

Dead Rhetoric: New Horizons came into existence in November 2013, after a period of studies and lineup instability. What can you tell us about those natural ‘growing pains’ in the early days – and at what point over the next few months did you finally settle into a steady lineup?

Luca Guidi: Of course, there were periods where we were trying to understand exactly the kind of person we wanted, especially for the singer. It has been so hard finding a singer that fit the vocal lines and the vocal register that I thought was the best for our songs.

Dead Rhetoric: You released your debut demo The Trail of Shadows in the spring of 2014 – what are your thoughts on the songwriting, recording, and performances for this effort? How do you feel now about the response and press/promotion this many years later?

Guidi: The Trail of Shadows was the first way to introduce our music to the world. To some extent it is a little part of Inner Dislocation, at its origins. We did a homemade recording, so we are proud of the result of the demo!

Dead Rhetoric: Your debut full-length Inner Dislocation recently hit the streets on Revalve Records. How did you gain the interest of this label – and where do you see the major differences in the development of the band’s sound and outlook from the demo days to this record?

Viviani: Well, we all knew Revalve Records because in last five years they have released a lot of very beautiful works with bands in the prog/power scenario. Moreover, Luca, our keyboardist, could collaborate with Revalve Records with another band (Fall of Darkness), and already knew how this label works. We changed a lot of our sound during the last years. We focused on sound fusion in its entirety, not just the tuning of the guitars or the keyboards themselves. Moreover, we wanted to arrange songs not only by a technical point of view, but also from a natural flow point of view. Songs had to flow naturally in the ears of the listeners.

Dead Rhetoric: Being a sextet, how does the songwriting process work – are there many changes and mutations that can happen for specific tracks from inception to completion? What did you consider some of the most challenging or surprising songs for Inner Dislocation?

Guidi: Inner Dislocation, for the reasons I mentioned before, took place without drums and vocals. So I tried to bring to the band my musical ideas and sheets, kept writing down, adjusting and linking the powerful riffs together, with the help of my guys. Of course, the last periods, when the band was in a steady state, every component and person was fantastic in arranging and improving their own parts.

Dead Rhetoric: How did the cover concept come to fruition – was it a collaborative process between the band and artist, or did you give the artist free reign to come up with this based on hearing your music?

Guidi: The concept is born directly from the band. Although the musical concept was already clear during the creation process, day after day we realized that all the songs had a powerful common theme.

Dead Rhetoric: You shot a video for “Born in the Future” – combining band performance footage and an intriguing conceptual/narrative element that includes some breathtaking outdoor/water-related scenery. What are your thoughts on the video shoot and the treatment – do you believe that progressive metal lends itself well to developing ideas through this visual medium?

Viviani: I think that the visual medium is a very powerful way to reach people and to communicate something. In this particular case, the video is a great metaphor and it is not strictly correlated to only one meaning, but instead it is free for interpretation, that is exactly what we wanted to achieve. The song, as the video, should trigger some emotions in the listener.

Dead Rhetoric: How would you describe New Horizons when it comes to live performance? What would you consider some of the best shows that you’ve performed, and what to you makes for an ideal show?

Guidi: The live performance needs the right concentration as well as a positive dose of anxiety. We want every detail we prepare before to come out, and all the shades we put into our work will also come out. Probably the gig at the Cycle Club of Calenzano, opening for DGM (Simone Mularoni’s band), was one of the best performances until now.

Dead Rhetoric: When you think of the world successful, which two or three bands come to mind – maybe as inspiration or a benchmark for where you would like to see New Horizons develop over the course of your career?

Guidi: We all know that Dream Theater have millions of fans around the world. It is such an amazing result for this kind of genre, isn’t it? So, we admire as much less famous bands like Haken, Symphony X, Circus Maximus, which grew from the underground step after step, never denying their identity.

Dead Rhetoric: What do you think are some of the biggest challenges or obstacles that you face trying to establish yourselves in today’s progressive metal scene?

Viviani: Well, I think that today, with the internet as a fundamental tool for not just the music business, a large growing number of progressive metal fans look more to the technical aspects (that are important) forgetting the human aspect of music, like emotions, words, and communication. So this is one of the biggest challenges to establish in the scene: to be perfect, when we know that perfection does not exist.

Dead Rhetoric: What would you consider your five favorite albums of all time- they can be metal or otherwise? And what have been some of your favorite concert memories that you’ve taken in purely as a fan?

A Kind of Magic (Queen)

Personally, I can’t tell you a single memorable concert, but I think that the most suggestive one was a Dream Theater concert at Villafranca (Verona) maybe six years ago (besides, the first show with drummer Mike Mangini).

Dead Rhetoric: How does the band balance out the musical activities while also sustaining a living and paying the bills? Do you have the welcome support from friends and family when it comes to your musical endeavors?

Guidi: It is not so simple at the moment. All we have done until now is a cooperative investment, with the help of families and incomes from our daily work. We hope in the future all of these efforts will come back to help us!

Dead Rhetoric: What are your views on the metal scene today? Do you believe things are healthy on a local/Italian level just as much as opportunities on an international scale?

Guidi: Unfortunately, the metal scene in Italy is not living through an extraordinary period. Maybe it never really did. But the most dramatic thing is that venues, even if there is a band with thousands of fans on Facebook for example, see rarely more than a few dozen people. I think this kind of music and metal in general has a more favorable appeal abroad.

Dead Rhetoric: What’s in the future for New Horizons over the rest of 2018 into early 2019 as far as shows, tours, videos, recordings, promotion, etc.?

Guidi: This is going to be an interesting period for us. Now we are spreading the promotion around the world, thanks to Revalve Records, and we are going to make something cool with other songs off the album. In May, we have a mini-tour in Italy opening for Circus Maximus, in Rome and Brescia, so this will surely be a fantastic experience. And other pretty things that we can’t reveal now. Meanwhile we don’t lose sight of our purpose, so we’re keep writing down new cool stuff for the next album. 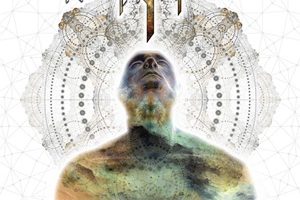