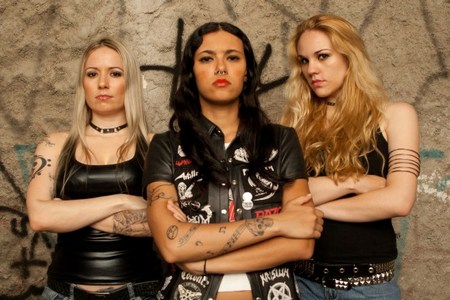 Dead Rhetoric: Are you still self-managed- and how do you balance out the road life with maintaining a sense of sanity or stability? Do you have very supportive families and significant others?

Lira: Yes, our families are so cool. They understand a lot. We will barely stay home this year, we are touring a lot and they are really supportive. Our families are the best. We are kind of self-managed- we have some people now that work with us on certain areas, gigs in the US or visas, we have booking agents in Europe too now. Napalm Records has helped take care of this. South America we do most of the stuff, but now we have a person who helps us out with some stuff. It’s a process, we have been used to self-managing everything so it’s hard to give the stuff to another person and be sure that the person is going to take care of this as well as we are. It’s a long process, so now we are giving stuff out little by little. Someone will have to be our manager at some point and do the full stuff, it’s not easy. We have to sometimes do phone interviews on the road, then for example when we were touring the United States we were dealing with all of the stuff related to the new album.

We needed to talk to the guy who would design the booklet, the guy who mastered and mix the album, the guy who would design the art, and then check the release dates, t-shirt designs- all while touring. We would arrive at a venue, work, play the show and then come right back (and) start working (again) because our label is in Austria and they are like 9 hours ahead. After the show we would be all rotten and tired but it was the only time for them, they were pretty patient. They would push but be patient, we can’t afford a manager right now that can take care of everything. We do 60 day tours and take care of everything, I just hope we don’t die from this! (laughs)

Dead Rhetoric: Speaking of South America, are metal tours going better there- because I’ve heard a lot of horror stories about bad promoters and bands getting ripped off through the years?

Lira: You know, it is and it’s not. You can never predict what is going to happen. It’s been worse, now we have a great chain of good guys and good promoters. As I know many guys from bands now I’m always recommending the right people for my friends. It’s a good way to prevent bad things from happening. There is always one guy…last night I saw Schmier writing something about this on his Facebook page, and I totally agree with what he said. A fan said that this keeps on happening because you guys don’t name the people who do this. And Schmier said we name them… then they retire or people stop going to their concerts so they are forced to retire and new guys come to screw things up. It’s always guys who have a lot of greed and want to take advantage of people because of the money. It unfortunately happens a lot down here in South America. It happens less than it used to. It will keep getting better. Bands shouldn’t give up on playing here- but just be careful, talk to people and ask for recommendations. With these kind of friendships it’s a way of preventing that.

Dead Rhetoric: I know that you are a big fan of Nuclear Assault and Coroner among others- what would be the pinnacle albums that you love from these groups that still fire you up when you hear them, and have you had the chance to see either band live?

Lira: The band that still moves me a lot is Nuclear Assault- Game Over and The Plague are the records that made me get into thrash metal and I get crazy when I still hear them- I want to break out into a mosh pit in my living room. That’s when you know it’s a good album- when you can go 5 years without listening to it and still get that feeling. I saw them live once, by that time I didn’t have a band and I was a journalist- I got the chance to interview them and it was so cool. And I also love Iron Maiden- I know it’s cliché to say that, Steve Harris is my god. I get all emotional, they are the most perfect band out there. I know there is Death, Chuck is the master – but Iron Maiden is very influential to me.

Dead Rhetoric: 2016 will be a very busy year for the band on the tour front- can you let us know what’s on the horizon? Will there be possibly more music videos from Agony, and has the band already started assembling riffs for the follow up?

Lira: We will be releasing a video at the end of this month, “Hostages”- it will be a video and we’ve released some bloody pictures of it, literally. We will think about another video down the line. We will start our tour on the same day we release the album in Europe, June 3rd in the Netherlands. We will go to 18 different countries in Europe- 54 days, 40 to 45 shows. Almost two months in Europe, and then we go straight to the East Coast in the US. Because the last time we did the West Coast- we also have some festivals confirmed in Canada. By the beginning of September, we come home for two weeks to finally have the show here in Brazil to release the album- that’s crazy, three months after it’s released. Then in mid-September we go to the Destruction, Flotsam and Jetsam, Enforcer tour in Europe- and then go back to Brazil to do more shows. We will get some time off in January, and then next year will be crazy again. We want to do Asia, Australia, Europe again, North America again, Central and South America.

As for new riffs, I told you we are procrastinators so we are still digesting the new songs. When it’s like three months before we are supposed to record the next album, I’m sure we will then be writing and recording the new riffs. It’s going to take a while.