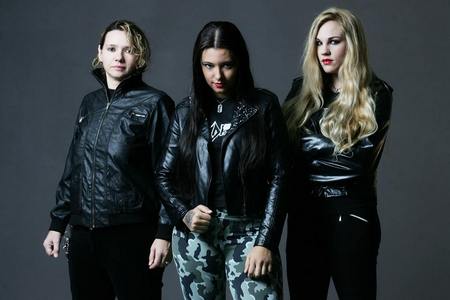 Most of the current crop of younger bands know going in that everything has already been done in terms of heavy metal styles – it’s more about putting your own creative spin on things in hopefully a fresh or interesting way. For all-female Brazilian thrash trio Nervosa, it’s about taking a lot of various sub-genres outside their foundation and developing hooks, riffs, and choruses that make people want to stage dive, mosh, or chant in unison. Climbing the ranks through good old-fashioned hard work and a tenacious spirit, a self-released video for “Masked Betrayer” caught the attention of Napalm Records – who signed the band and released their debut full-length Victim of Yourself in 2014.

Since then, these musicians aim to put on a headbanging show wherever and whenever they can – last year alone playing 17 of the Brazilian states, doing 51 shows in 60 days across Europe, plus 7 countries in Latin America, bringing their thrash with crossover and death inflections to audiences at clubs and festival settings. Gearing up for the release of their second album Agony, vocalist/ bassist Fernanda Lira is understandably engaging about not only her band – but the entire metal community in general. It’s her life and passion, and she clearly conveys those thoughts throughout our 45-minute conversation. Prepare to learn more about recording a new album while on tour, the pressures of self-management as you are constantly touring, and the importance of Sepultura to the band’s current outlook of making a living at thrash metal.

Dead Rhetoric: What are your early memories surrounding heavy metal growing up- and how did you decide to go from being a fan to picking up an instrumental and playing in bands?

Fernanda Lira: Okay. Because my dad is a metalhead, he’s one of the greatest metalheads that I know- since I was a child I was pretty much born and raised in a musical environment, a metal environment. I have memories of being in my home and my dad listening to music, he has an acoustic guitar and I have memories of him playing. My earliest memories (having a) straight connection to hard rock and metal was when I was around 6, my dad used to have a tape recorder and then I would tell him the songs that I liked the most from the ones he was listening to and then he would make me a best of tape. So I had a collection of tapes that I would listen to all of the time- these tapes had songs from Kiss, who were my favorite band from when I was 6, to songs by Suicidal Tendencies, Biohazard, and stuff like that. He used to record whatever I asked him to, he presented a lot of bands to me this way like Manowar, Iron Maiden, Warlock, many bands.

I remember one of the first times I felt like playing bass was when I got into Kiss Unplugged, I listened to that a lot. I watched Gene Simmons, and you know when you are a kid you have that fascination with the mask, the blood, all the stuff he does with his tongue- I would imitate him with my dad’s acoustic guitar, try to play the way he did with his fingers. When I saw Steve Harris play, my dad is a bass player too, he would always tell me to pay attention to his bass lines. I would take on “Heaven’s on Fire” by ear, “Shout it Out Loud”, playing with fingers. When I decided to have a band it was around 14-15.

Most of my training is by ear, a lot of Iron Maiden was like my school, Rush too. Rush was a band that made me improve my technique. Geddy Lee and Steve Harris were my best teachers- I tried to study theory at school but after two classes it was super boring to me. It has a different rhythm, it was slow and you need a lot of patience and that’s not my thing. I’m very intense so I would take songs from Iron Maiden like “Powerslave” and ask a teacher to teach me… and they cared more about the notes. I preferred playing and try to develop from listening, watching videos is more my thing.

Dead Rhetoric: Agony is the second full-length album for Nervosa – did you worry about getting the material tight enough and in shape considering you recorded here in the United States on the West Coast while also on tour, given tight time deadlines?

Lira: Yeah. But you know what? We are kind of use to it- I don’t know why we procrastinate. We are always super busy, touring and everything. With Victim of Yourself it was the same thing- we were doing our stuff and then we saw that we had three months to deliver our album, we were like ‘Ah!’. We’ve always worked under a lot of pressure, and the good thing is we know how to deal with that well. On Victim of Yourself we had a lineup change, our drummer left and we had three months to write the album and start recording. Myself and (guitarist) Prika (Amaral) had many ideas, we wrote lots of songs pretty fast. We talked to the drummer about how we wanted the songs, and we would write one song at every rehearsal- we wrote five songs in five rehearsals. Prika got sick, sore muscles in her arms so we had to stop the recording process for two weeks.

So we did that on time, so with Agony there was a little pressure because we only had 3 weeks before starting the tour here- no delays would be possible. We knew how to work within that because of our previous experience- the writing process was a mess again. We wrote the 12 songs in less than 4 months, because we had toured a lot and you listen to a lot of music when you are touring, believe me- we played with a lot of bands and got inspired. When it was time to write the songs it was super cool for us. We rehearsed two days, I would write some riffs and Prika would improve them, we would create the drums along with our drummer. One song a week again- we were cool with that. There was music all over our heads. When we recorded, we were already rehearsing three or four times a week- especially because we needed to create and practice the songs. These three months before the recording were very intense, when the recording took place it was pretty smooth. We didn’t feel much pressure.

First of all, we knew the recording would be something different. Victim of Yourself, we like the production but I think it’s important for a band every time to take themselves to the next level with each album. I wanted to take this album to another level, push us to another level. As we would be touring the US we thought, why not record here? It would be great, it’s a long-term goal and a dream when you are a Brazilian metal band to dream of recording outside of Brazil. Recording in the US influenced a lot on the album positively. It might sound silly (but) we get amazed easily by what’s going on.

Most of the bands that influenced me are from the US, for example Nuclear Assault- that’s the band that made me want to have a thrash band, and all the Bay Area bands, death metal bands from Florida. For me to be here recording in California, it’s the state where most of my favorite thrash metal albums were recorded. It was our first time in the US, we had this whole new special vibe. Every time we would wake up at like 7 am, without being angry or annoyed, we would wake up with a smile on our face because we are recording in California, let’s shred! We would spend 10 hours there, tired but very fulfilled. That’s why the album sounds more energetic, we had a lot of good energy going on. The quality of production is better, the producer was patient to find the sound we wanted – we had better equipment ourselves, better instruments, better strings, everything contributed to take the album to the next level.