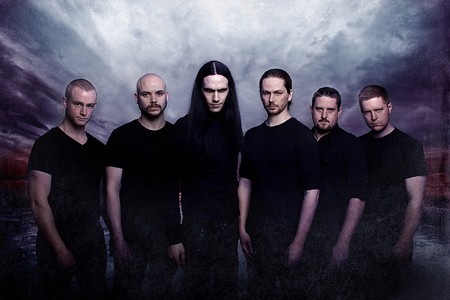 Pronounced Nay Ob-li-vis-kar-is and roughly translated from Latin as ‘forget not’, this septet of extreme progressive, avant-garde metal musicians have taken their sound to the underground and above all the way from Australia. It’s difficult to encapsulate in a few short words what their brand of music makes you feel – the pictures they paint contain shades and elements the majority of artists would never dare to incorporate, or could in such a seamless way as this group does.

9 years from their inception in 2003, their debut album Portal of I made a very strong impression with many on the Dead Rhetoric staff, even at its sprawling 71 minute plus playback over the course of 7 songs. Expecting the band to take it’s time on the follow up, a sense of shock hit my system to learn the follow up Citadel appeared in the fall of 2014. Receiving a bump up to Season of Mist, this 6 track effort may be shorter at 48 minutes, but it doesn’t mean that the band has forsaken any left field turns, pushing the parameters of what they know and love to the edge. If Opeth is now progressive rock, well Ne Obliviscaris remain content to still be extreme, progressive death metal – while throwing in jazzy spots, exotic passages, clean vocals, growls, and true violin parts that haven’t been heard since the heydays of Kansas.

Firing off questions to the band seemed like a no-brainer, and thankfully drummer Daniel Presland feeds the need to learn more about the creative process, his personal goals, and what fuels their ‘never stagnant’ philosophy that benefits the metal community because of their one-of-a-kind sonic outlook.

Dead Rhetoric: You had a lifetime to write, refine, and record your debut album The Portal of I – and the follow up Citadel comes out 2 years after your first record. Describe the challenges of coming up with new material, considering your avant-garde, progressive/extreme metal style? Do you feel you are improving as songwriters based on band interaction and natural life experience?

Dan Presland: The biggest challenge always is making music we all enjoy. We strive to make all members happy in the creative department, which is a challenge in itself because we have such varied influences and tastes between us all. We definitely feel we are improving in all aspects, and we will continue to push forward. I would say the day we stop continuing to pursue higher levels of creativity will be the day we put our instruments down. Hopefully never.

Dead Rhetoric: Citadel is much shorter time-wise than your debut. I find that technically advanced forms of metal can wear out their welcome if they go past 50 minutes. Given that you’ve delivered albums on both ends of the spectrum, where do you see the ‘quantity versus quality’ debate for Ne Obliviscaris?

Presland: We never set time frames or lengths for any of our material. It’s just how it come out. We felt this album was done when we finished writing the last pieces of the puzzle. There really is never a shortage of creativity within the band. All members are always pushing forward new ideas, whether it is discussing an idea on the plane on our way to tour somewhere, or in the jam room. For me personally, I can never sit still on something for too long, I always want to work on something new and push myself as far as I can go. This is quite indicative for the rest of the guys in NeO also.

Dead Rhetoric: The type of violin play Ne Obliviscaris incorporates into these songs comes from more of progressive rock meets classical background versus folk metal which can be more fiddle/culturally driven. Has this always been a conscious choice to explore that side as a great blend, and do you map out where to place this instrument into the mix?

Presland: Tim always strives to be creative and different with everything we do. He has a very broad spectrum of playing ability, and it definitely shows in NeO. I’m not sure it has been a conscious decision all the time, as Tim definitely works off feel, and really listens in to what the compositions require. He has a great ability for this in my opinion. Tim will 95% of the time map out where he feels violin will be placed throughout a composition. He will generally bounce ideas off us in rehearsal, and we basically go from there.

Dead Rhetoric: How much time and energy do you place into the lyrical/word concepts as the music for Ne Obliviscaris? Are your fans as keen to engage in discussions about the words as they probably do in terms of wanting specific musical transcriptions?

Presland: Xen puts a great deal of time and consciousness into his lyrical ideas. Everything has a particular meaning or feeling, whether this is from the art he creates, or the lyrics he envisions for the band. Xen will write the lyrics around the same time as we compose a song. It can take months at a time for something to come to a complete finish, so it can take a long time for sure.

Dead Rhetoric: When does the band know a song is complete? Are you the type of band that needs to meticulously work on parts and refine them – or are there times that ideas come about from rehearsal/jam sessions? What would you say is the most challenging Ne Obliviscaris song to perform in a live setting?

Presland: We generally just get a feeling that it is done. We kind of all just go, yeah, this is our finish line. Sometimes we tinker some more, but generally we all know when a story has run its course. Sometimes parts come out very easily, for example “Phyrric” was written in just a few jam sessions, however, “Painters of the Tempest” took a few years of gradual work. Sometimes we take a long time to complete sections/songs, sometimes it flows out effortlessly and quickly. It really depends. The most challenging song I would say is “Painters of the Tempest”. It is over 16 minutes, and quite technically challenging for all members.

Dead Rhetoric: I recently had the chance to view that Metal Down Under DVD from Animus Industries, a long documentary feature regarding the history of Australian metal. You also had the chance to participate in the series – I’m curious to know your thoughts on the project as a whole, did you feel like you discovered something more about the scene as a result?

Presland: I did hear we were featured on this DVD, very cool indeed! This is still on my ‘to watch’ list personally, but I have heard some of the guys talk about it, and they have all said it is very well done, and very informative. So I shall endeavor to sit down and have myself educated.