My Dying Bride – Floating In Darkness 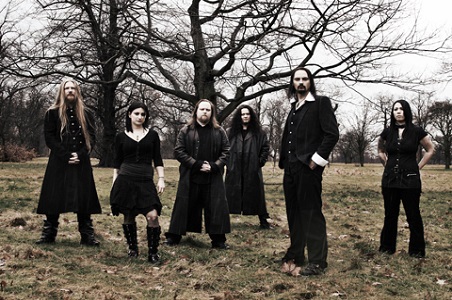 Arguably the most morose band to ever hit the metal scene, England’s My Dying Bride are in a reflective kind of mood, having just released Evinta, an orchestral album that celebrates their 20th anniversary. By taking snippets from each of the band’s albums (it’s a deep catalog, mind you), Evinta adds a new twist to old MDB classics, and proves to be another deprecating, elaborate body of work, something we’ve long come to expect from the doomsters.

We’ve long championed MBD on these pages and for good reason – their mid-90’s output is untouched in the Gothic metal world. The triumvirate of 1993’s Turn Loose the Swans, 95’s The Angel and the Dark River and 96’s Like Gods of the Sun are some of the most emotionally-detached albums put to tape, with singer Aaron Stainthorpe unraveling right before our eyes, only to be lifted up by swooning violins and gritty melodic passages. The band has yet to come close to matching these albums (although 99’s The Light At the End of the World has its moments), but make no mistake – My Dying Bride is still a viable commodity.

All things considered, we snagged the reclusive Stainthorpe for a round of questioning on Evinta, as well as why they’ve yet to return to North America since 1997, and what’s next for metal’s most miserable band. Read on

Blistering.com: My Dying Bride has always done things in an unconventional manner, and Evinta is a great way to commemorate your 20th year as a band. You had this idea for quite some time, so how does it feel to finally release it?

Aaron Stainthorpe: Bloody great! It was a lot of hard work but it’s certainly worth it. I am extremely proud of how it has all come together.

Blistering.com: How difficult was it to choose the songs you wanted to use snippets of?

Stainthorpe: Not that hard actually, but tiresome as we had to listen to every single riff we’ve ever written from the original demo to the current CD, make notes of them and rearrange them, then try to explain what we wanted to classical musicians, which wasn’t as easy as we’d expected. But ultimately, it was great fun.

Blistering.com: A key component to the release is Johnny Maudling, who has been working with you for a while now. Describe the working relationship between Johnny and the band.

Stainthorpe: He’s actually appeared on a couple of past My Dying Bride albums, on keyboard duties when we needed a bit extra so we’ve known him for many years. We’ve seen what he can do with keys and arrangements so he was the obvious choice and his ability to read & write music score was a huge bonus.

Blistering.com: Your North American fanbase has been long pining for your return. As your career wears on, is it becoming less likely you’ll make it over?

Stainthorpe: More likely actually as the fanbase over there (as well as distribution) has accelerated over the last few years, which is great for us and the fans. We shall return proper sometime but in the mean time we will be playing the 70,000 Tons of Metal cruise out of Miami in January.

Blistering.com: What do you remember about your stints in America, especially the Dio tour?

Stainthorpe: All of it as it was fantastic! We’ve been aching to return but have been tripped up by one thing and another but we’ll definitely be back. Dio was a supreme gentleman and will be sorely missed, especially by us whom he treated as equals while we were there, god bless him.

Blistering.com: After that tour in 1997, the “classic 6” lineup unraveled. Do you have any regrets over it?

Stainthorpe: No, rock n roll is not everyone’s cup of tea and so they leave. It was sad but we were never going to throw the towel in as we still had ideas and goals to achieve.

Blistering.com: Do you keep in touch with former members like Rick [Miah, drums] and Calvin [Robertshaw, guitars]?

Stainthorpe: Not really but I see them from time to time when I’m in their neck of the woods and we are very much on friendly terms, like every past member really.

Blistering.com: Your catalog is going to always be marked by the “departure” you took on 34.788%…Complete, but the album holds up really well 13 years later. What’s your take on it today?

Stainthorpe: It’s one of my favorites to be honest as it’s got some truly brilliant tracks on it. It was a bit of a blip on our musical radar for some but we loved it, which is why we released it and I’m very proud of it to this day and it seems that fans love it too now – it’s only taken them 10 years!

Blistering.com: Because that album wasn’t as well-received by the fans, did it scare you off from doing experimental-type of music?

Stainthorpe: We were never planning another one because that one exorcised us of those experimental ideas leaving us clean and ready to get straight back into it. It was never that experimental to be honest, just one or two off the wall ideas surrounded by the usual gloom & melancholy.

Blistering.com: However, one could make the argument that Evinta is an “experimental” album, so how do you think the fans will react to it?

Stainthorpe: It is indeed, but much more in the vein of gothic/classic which our fans are in love with. It’s like the sound track to the darkest, melancholic and yet passionate movie never made.

Blistering.com: If there was one definitive MDB song in your catalog, what would be it? I know that’s a tough question, but I’ll vouch for “The Cry of Mankind.”

Stainthorpe: It’s a classic for sure and a tough one to argue with – so I shan’t bother. I do love “The Dreadful Hours” though… oh, and “Two Winters Only,” and “A Doomed Lover.”

Blistering.com: Conversely, are there any songs and/or albums that you wish you hadn’t of created or could take back?

Stainthorpe: Absolutely not. Our music would not be out there if we weren’t 100% into it. When we play live we play from every period of our existence because we love all the tracks. Hand on heart, I’m so proud of our achievements!

Blistering.com: Are there any new songs in the works? If so, how are they shaping up?

Stainthorpe: While I spent most of the time on Evinta, Andrew [Craighan, guitars] and Hamish [Glencross, guitars] were hard at work writing the new studio LP so that will be out later this year, so quite a prolific year of releases from us. Should keep the fans happy.

Stainthorpe: More shows in Europe, new album then the 70,000 Tons of Metal festival out of Miami in January 2012 which will be fun.