My Dying Bride – At Home With Despair 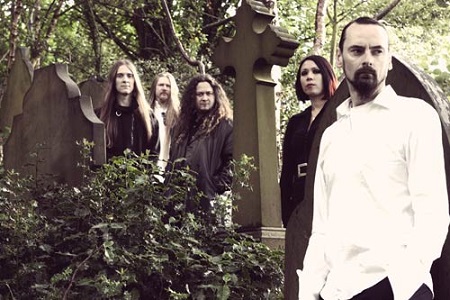 Doom metal’s heart-stricken poet, Aaron Stainthorpe’s lyrics of allure, metaphor, and romance have given My Dying Bride the emotional touch-up that their contemporaries (i.e. Paradise Lost, Cathedral) have lacked. The proof is in the band’s back catalog, where gut-wrenchers like “The Cry of Mankind,” “For You,” “My Wine in Silence” and “A Cruel Taste of Winter” resonate with heart-on-sleeve poetry, laced with imagery and honesty, serving a musical backdrop where smoldering melodies and lead-weighted riffs rule the day. Since 1998’s departure album 34.778 Complete, the course MDB has plotted has been set on crippling desolation of the emotional unkind, unsurpassed in its aura, marveled by its consistency.

The band’s new album is A Map of All Our Failures, which Blistering aptly described to Stainthorpe as being “miserable,” a word synonymous with the Brits. Thanks to a Pro Tools-less production job that recalls the glory days of Turn Loose the Swans, the album is as rigid and deep as anything MDB has done the last decade, with Stainthorpe’s intoxicating vocals leading the way. It supplements the band’s previous works nicely, in lockstep with the bleak pulse of the band’s mid-90’s triumphs.

No chat with Stainthorpe is without discussion of the band’s monumental climb to the top of the doom ladder, along with regular queries about when MDB will finally make their long-awaited return back to North America. The good-natured Brit was more than happy to submit to Blistering’s interrogations about those and more, and after settling in with a glass of wine (the singer had just returned from rehearsal), off we went…

Blistering.com: For a band that has done very little live activity in North America, it has to be nice to know there is still an awareness of My Dying Bride. Is it comforting to know people still care about you over here?

Aaron Stainthorpe: Of course it is! It means a lot to us. We had a blast when we over there with Dio, many, many years ago [1997]. We had a wonderful time and made a lot of great friends. We were more like tourists than anything, but we loved it. We thought we’d back before now…I’m not sure what has gone wrong; there have been different hurdles placed in front of us. We’re working with different people now on that side of the pond, so with a bit of luck, we can promote it over there with some shows. Let’s face it: There are lesser bands who come to the States quite a lot. I’m left scratching my head wondering why they’re doing it and why we’re not doing [it]. If we don’t come over there in 2013, something is very wrong indeed.

Blistering.com: If you want to get technical, you did the 70,000 Tons of Metal cruise earlier this year, so that could count. However, with the sun and the water…that’s not exactly a My Dying Bride-type setting.

Stainthorpe: It was unusual. When we got offered it, I scratched my head and eyebrows were raised as well. We thought we’d see how it goes and we’ll see if they genuinely mean it and the offer was for real. It was, and we went over and had an absolute blast. The show on the trip out was in the ballroom, then we played on the main deck in one in the morning, so it was dark and the atmosphere was great. It was a bit odd seeing people in bikinis and Speedos when you’re onstage. That is a first. Looking up at the stars, it was pretty cool because it can get pretty dark on the sea. It was a real unusual situation for a band like ours to be in, but if we get offered it again, we’ll jump to it.

Blistering.com: I’ve read that playing live isn’t one of your favorite things to do because you have to relive the stories behind your lyrics. Is playing live becoming less of a burden? Are you starting to enjoy it more?

Stainthorpe: “Enjoy” is not a word I would use for it [laughs]. It’s not as hard as it was in the early days, but it’s still difficult. I would love run up on stage in jeans and a t-shirt and belt out the songs and interact with the audience, but that’s not me.

Blistering.com: That’s not you at all.

Stainthorpe: It’s not me at all and a couple of hours before we go onstage the nerves are kicking in and I almost become speechless. I don’t want to talk anybody. [The band] is used to it, so they don’t want to talk to me [laughs]. I’m pacing up and down and getting in the zone, and onstage, I’m in a different world. It’s a pretty miserable place to be and I don’t feel like interacting with the audience. Not in a rude way, but I’m in a bubble and that bubble can’t burst or otherwise, the atmosphere will be gone. The feeling, the intensity will be lost, and I think it’s important to keep hold of that. Coming off stage is my favorite part of playing live. I’m exhausted mentally and physically because I really throw myself into it. Even the festivals are hard where we’re playing for an hour, but a headline tour where we’re playing for an hour and 40 minutes, I’m lucky to survive the tour. You gotta knuckle down, get to the gym, and get on with it.

Blistering.com: Onto the new album, and it appears you’re doing lots of promo for it, even videos. Not like you haven’t promoted your albums hard before, but for A Map Of All Our Failures, you’re really hitting the promo scene hard.

Stainthorpe: Definitely. I think the record label is using an independent promoter. In the past, they were doing it themselves, so they’d ring up the usual magazines for interviews, but I think they’ve funneled it out to specific companies whose specific job is to sell something. I went down to London to see these guys and they were coming up with magazines who wanted to do interviews who I’ve never heard of before. There’s a circuit of magazines and you get to know some of the journalists over the years, but some of these magazines and newspapers popping up…I did an interview with the Bangladesh Times! I thought, “Hold on a minute, that’s quite obscure!” There’s some unusual publications coming out of the woodwork and asking My Dying Bride to be in their magazine and that’s a great thing. Our music is difficult to listen to, sometimes. I think there’s a lot of people out there who are unaware of this style of music and My Dying Bride, who might take a little plunge and they may just enjoy some of it. It’s not all doom and gloom…we’ll it is all doom and gloom.

Blistering.com: Let’s not kid ourselves!

Stainthorpe: [laughs] Some people who think of heavy metal think Iron Maiden, but then when they hear My Dying Bride they might think twice and think heavy metal is a bigger genre than I’ve given it credit for.

Blistering.com: As for the sound of the new album, it’s just miserable. It’s not like you don’t have any miserable-sounding albums prior, but are you finding that as you rehearse these songs that they’re…miserable?

Stainthorpe: Definitely. We’re very aware of what our fans think and what they comment on. We pay attention to the My Dying Bride forum. There’s a lot of people saying it’s pretty miserable, but also has a slight retro feel. We’ve rather than plugging in the instruments right to the computer, we’ve recorded it in the old style with speakers, some valve amps, and placed the microphones right in front of them. Not many people record like that anymore. It’s giving it a slight retro sound and people are harking back to the grand days of Turn Loose the Swans and The Angel and the Dark River. So people are thinking this is a return to form – not that I think we ever left the form – people seem to be really going on with it. Yeah, it’s miserable. With a name like My Dying Bride and an album called A Map Of All Our Failures, what else do you expect?

Blistering.com: The album has the feel of both of those albums, definitely. What prompted you to record in such a manner?

Stainthorpe: I do like a good produced album and I’m sure most people do. I can’t remember where it stemmed from. We recorded that way for the Barghest ‘O Whitby, the 27-minute EP. I’m not sure what Hamish [Glencross, guitars] and Andrew’s [Craighan, guitars] original plan was, why they wanted to record in that style. You’re making a rock for your own back by recording in that style. If you mention Pro Tools, it’s just harder to edit when there’s feedback and fingers scraping up and down the fretboard; it’s just harder to clean up. They were adamant they wanted to record in that style. I’m not a musician, so I couldn’t give a shit, so I went along with it. We liked it and went along with it, so we thought to do the album in a similar style. The violins are still lovely and clean, the keyboards are there to embellish what was done before. It’s not like a demo, but there’s probably a couple of feedbacks creeping in there which adds to the rawness of the feel.

The next album could be WELL over-produced. Sometimes it’s nice to have a little bit of pomp in what you do, a little bit of theater. I’m not suggesting we’ve found this rough sound and are going to head right down that alley for every album we do onwards. The next one could be polished as you like.