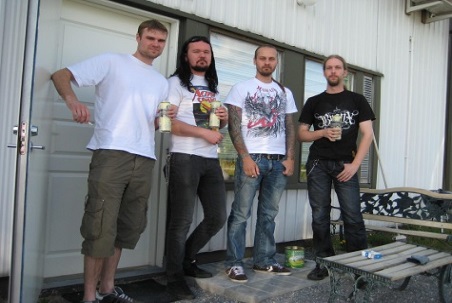 Back from the brink after nearly calling it a day in March of 2011, Finnish melodic death metal upstarts Mors Principium Est have rebounded with a new guitar tandem, record deal with Germany’s AFM Records, and album which should see the light of day in late 2012/early 2013, their first since 2007’s fieryLiberation = Termination) . Rattled by the departure of guitarist and primary songwriter Jori Haukio (who split right after the release of 2007’s Liberation = Termination), MPE struggled with several ill-fitting guitar tandems, prompting lead singer Ville Viljanen to make the bold proclamation that “If it does not work this time, or we don’t find the right person/persons, then it’s game over for MPE.” After a worldwide search, the band acquired British guitarist Andy Gilliion and New Zealand-based axe-man Andhe Chandler, thus giving the Finns a new lease on life, and more importantly, some much needed stability in their ranks.

“Andy is from United Kingdom and Andhe is from New Zealand, ha-ha, so what else?” begins Viljanen via email. “Nah, they are cool guys. Andhe just moved to Finland and we hope he would get the residential permit and would find a job, so he wouldn’t have to leave Finland. I think as a band we are stronger now. And I don’t mean we would be stronger only now with Andy and Andhe, but we already were stronger as a band like four years ago, when we had Tomy [Laisto] and Karri [Kusima], or Tomy and Kalle [Aaltonen]. But, of course we are strong now too with Andhe and Andy. The point was, when Jori and Jarkko [Kokko] left and we found the new guys, we started to have fun together and we all enjoyed hanging together. So, in that way, Jori’s and Jarkko’s departure made the band stronger. Well at least [the new material] will be different because of it. I am sure Jori would have done something a bit different.”

Indeed the band suffered through as many as four different guitar tandems since the release of Liberation = Termination, which might be some type of mini metal milestone in member turnover. Being that Haukio wrote the bulk of the material on the band’s first three albums, you would think this would be the primary cause for concern. Not so, says Viljanen. “You could say the only struggle we had to face was with the guitar players. I mean, we didn’t have any other problems than to find the right players. But yeah, in some point it looked like there isn’t anybody that we would want to take into the band. So in that point, yeah, we did think that maybe MPE will not write more albums and that the story of MPE is over, but luckily that did not happen.”

MPE’s first three albums (2003’s Inhumanity, 2005’s The Unborn and Liberation = Termination) each split the gap between ultra-harmonious Finnish melodic death metal and expansive experimentation. Meaning that on the surface MPE is very much rooted in the melodic death metal scene, yet their silky-smooth riffs, occasional female vocal burst, and extreme rhythms were all a part of a concoction that was ahead of its time…in 2007. According to Viljanen, don’t expect much to change with the band’s forthcoming fourth album.

“I feel we’ve continued from where we stopped. Like I said, the new songs still have the core of the old MPE. So, we did not change our music style too much. Actually, the music style is still the same old melodic death metal, but now we may have some new things that the old MPE did not have. So, I hope people will look at this album as the fourth album of MPE and not the first album of the new MPE.

“At least we will remain melodic, he continues. “We didn’t even think about ‘adding new twists’ when we did the previous albums. Only when we read the reviews we found that we may have done something new in the melodic metal scene. And talking about that, I think the most funny thing was in this one review. I can’t remember what review it was, but anyway. People have always compared us to Dark Tranquillity, like ‘Ville sounds a bit like Mikael Stanne’ or ‘their music sound like Dark Tranquillity,” etc., etc. But in this review, the reviewer said that Dark Tranquillity sounds like MPE. That was cool!”

As of press time, there is no title (or song titles, for the matter) for the band’s upcoming album, but according to Viljanen, “the music is done, still need to finish the vocal parts and lyrics, then we would be ready to begin the recordings, so it looks pretty good at the moment. We have no plans yet, only hopes. We hope we could finally start touring. I feel we are ready to jump back in. Actually, I am really looking forward to it.”