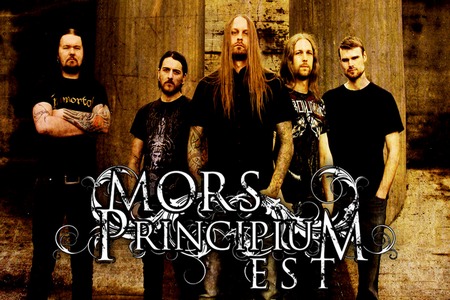 Dead Rhetoric: Where do you view your status within the melodic death metal community at this time – and who would you consider some of your peers/mentors that you possibly share similar outlooks and philosophies when it comes to your style?

Gillion: I think the band is still rather unknown, so it’s hard to put us in the same category with bigger bands in the metal community. Also, I really do think we have a unique sound and I don’t really like it when people compare us to Children of Bodom or In Flames. I would describe MPE as a band that has everything to offer but has just been unlucky in terms of exposure. We’re still a pretty underground band in the grand scheme of things – something I really hope will change with the new album.

Dead Rhetoric: What is your relationship with social media when it comes to band activities? How do you maintain a balance between giving insight into what you are doing with studio diaries, updates, etc. and also try to maintain a sense of sanity but not letting the technology consume your every waking moment and move?

Gillion: I think if you have watched the studio diaries for the new album you will see that very little sanity was maintained. Social media is a very important tool for any band and really allows you to connect with the fans. I think the more you can use it the better and hopefully we’ll be uploading some more videos soon!

Dead Rhetoric: What have been some of the best fan encounter stories that have happened to Mors Principium Est through the years? Do you find many who end up travelling to numerous shows when the band is on tour – and how does it make you feel about that kind of dedication?

Gillion: We have such amazing fans. I remember a guy called Georgi in Romania who brought a big 2 liter bottle of something I can’t even describe backstage with “Mors Principium Est” written on it. He apparently made it himself and it was basically pure ethanol. I’m still not sure if he was trying to kill us or not, but I do remember crossing the border to Belarus on the tour and having to throw away all sorts of sandwiches that were banned in that country – and when we finally got past the armed guards we realized we still had that bottle of liquid death in the van. Everyone I meet seems really dedicated to representing us and it’s such a cool feeling to know those people are out there supporting us.

Viljanen: There were some guys when we played at the Earthshaker festival in Germany around 2007, who came to see us play all the way from Colombia. And in Japan I guess the biggest impact was made by this about 40 year old dude who cried when he could actually talk to us and got our signatures. And he cried because he was so happy. I thought I needed to make that clear to everyone. Ha ha.

Dead Rhetoric: Can you tell us the best concert memory you have through the years purely as a fan – inform us of all the details as far as when the show took place, the bands on the bill, where it was, and particular fond memories that stood out?

Gillion: This is a tough one. I guess it would have to be my first ever gig. My dad dragged me along to see his old favorite band, Wishbone Ash. We were right at the front and they had about 3 lead guitarists and it was the first time I ever saw or heard guitar harmonies like that. It really inspired me to write music and incorporate those lead guitar harmonies and it probably made me the type of guitarist I am today.

Viljanen: With MPE, I would say it was the gig in Cleveland at 2005. Reasons were that it was mine and the band’s first time in USA. The venue was good. We were treated really well. We had a good playing slot. There were Hypocrisy, Soilwork, Dark Tranquillity, God Dethroned and many others playing on the same festival. My personally best concert memory is actually pretty recent. I went to see Ghost (Ghost B.C. in US) in Tampere, Finland on December 2012. I think that is the best gig I have been at, ever.

Dead Rhetoric: How much of a factor does personal chemistry and general friendships within the group play in terms of output and performances for Mors Principium Est?

Gillion: It’s pretty important if you’re going to work together on albums and tour together. No one likes to be stuck on a tour bus for a month with people they don’t like. There is always some tension in the band though, mainly between Ville and Mikko. But I think they’ve just known each other for too long. Everyone pisses each other off. We just get on with it and play the shows and by the time we meet up again we’ve forgotten about the fights.

Viljanen: I agree with Andy.

Dead Rhetoric: What concerns do you have about the world that we live in today – and where do you think the leaders of the world need to put more focus on to make things better or more tolerable for the general population?

Gillion: It’s difficult to know all the facts, and there is clearly more going on that is hidden from us. So it’s hard to say. But renewable energy is something that needs more attention. Americans spend ten times more money each year on pet grooming than studying nuclear fusion technology and yet that could possibly be the answer to continuing our world while eliminating greenhouse gases etc. So in essence, we have our priorities all wrong. To be honest, we should probably remember where we’ve come from to get to this point though as a species. Being kind to one another is a culture that has evolved over millions of years. I think people don’t give humans enough credit. Compare us to other animals and the majority of us are pretty civilized. Have you ever watched a nature program? Non-human animals are right bastards. The world is a fucked up place and we’re the only ones trying to change that. It’s just a shame about the terrorists and the music industry.

Dead Rhetoric: Can you let the readers know what the next 12 months look like for the band in terms of performances? Are you hoping to line up touring situations in overseas markets, even if it may be festival situations at first?

Gillion: I wish I could give you the dates but we currently don’t know what the situation will be like. All I can say is that we hope we can play to as many people as possible and promote the new album! Thanks to everyone for their support and we hope to see you soon! 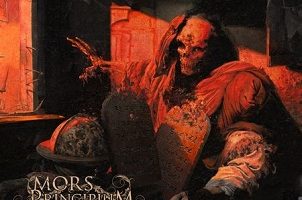