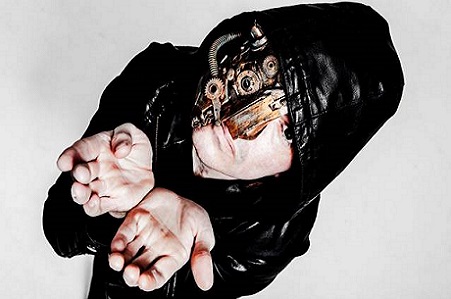 Dead Rhetoric: Your vocals are no doubt going to be the main topic of conversation with people. Were you worried about the risk of doing all clean vocals?

Harris: At first, I decided that I would use mostly clean vocals, and use more screams mainly for dynamics, and building tension. I tried various things on five or seven songs, and when I played it to [Napalm producer] Russ Russell and Shane Embury, they both said the same thing, and I wholeheartedly agreed with them, ha-ha. The screams sounded intrusive, and pulled the potential of the mood into unwanted, unnecessary territory. It might have been more acceptable for some, but to me, it felt suddenly limiting, and easily classifiable, not extreme, not needed.

I did use a few screams, only because they seemed to help push the tracks where they needed to go. I seriously thought about each and every action, and just settled on the fact, that if it feels good, if it works, if it shows more emotion to the lyrics, then that’s what the songs need. I treated it as non-personal from a criticism viewpoint. I would pretend that this guy is the new singer of my band, and if people don’t like his voice, then it’s not a reason not to try something that needs to happen. It was a comfortable decision, once I justified that we can’t let what people might think to prevent evolution to take place. I finally summed it all up with a simple phrase, when faced with a paradox, those who mind don’t matter, and those who matter don’t mind…

Dead Rhetoric: In some form or another, you’ve been active in the extreme metal scene for 25 years. Did you think you’d last this long?

Harris: Did anyone think we’d last this long? When I first moved to the UK, I knew it was a time-bomb waiting to explode with certain personalities in the band. Once they left, we took things one step at a time, pursuing a creative vision that developed over decades. We challenged the foundations of where we started, and that kept things interesting for us to make this a lifelong mission. Like any marriage, people progress, and search to find new ways of expressiveness, living together, working together, we’ve somehow managed to step by painful step to continue reaching for the most improbable dream. Hopefully one day, one can reflect and truly believe that the sacrifices made were all for the greater good.

Dead Rhetoric: Why do you think you’ve been able to have such a long career?

Harris: Maybe it’s because we were content with our own actions and objectives. We pushed the boundaries when necessary, even if it was too advanced for those with limited insight. Compromise and choosing your battles and the most logical way forward also play a massive part in any partnership. When the world seems against you, much can be achieved by teamwork with a long-term vision.

Dead Rhetoric: Obviously, playing in a death metal/grind band for another 25 years might be hard to pull off. Have you started thinking about life after Napalm? Maybe do Menace full-time?

Harris: Like anyone at our age, it’s hard to imagine life in 10 or 20 years time. We should have had a pension plan or something, ha-ha. All I ask for is small doses of happiness, something to share, and health for my family and loved ones. These are the obstacles in life, and eventually we always make the right decision. Everything I do is actually full-time. I always try to carry more than I should, but it’s how I am.

We all have our physical limitations, and as we all age, there are realizations in life about the things that really matter, the things that we took and continue to take for granted. Most eventually make the right choice at the crossroads. It’s gone beyond music, and creativity, since there is a lifelong friendship, commitment and unmistakable bond. This connection should be nourished and nurtured, and day by day, continue to slowly plan our next objectives. There are new doors opening for everyone I’m involved with, and we all support each other in every way that we can to make things work, our own support network.

We’ve recorded half of the new Napalm album already, and there is still a drive, a reason to put ourselves though whatever mental and physical abuse await us in the coming years. There is no point looking at it any other way except having ones priorities straight.

Music is a selfish occupation that consumes each person in different ways. It takes a lifetime to achieve any goal, because they are always led by new ambitions. Otherwise, we give up, and miss the point in life.  There is always a cut-off point, where people and circumstances push others into new fields. We are still part of a collective vision, so there’s no need for immediate change, only on the productive side. Until it reaches its peak of productivity and limitations, there is no turning back…

Harris: We’re in the process of planning the first full Menace tour, and finishing up the new Napalm album before the end of 2014. I’m really curious to see how things progress to the next stage. Thanks to everyone for the continued years of support and the eventual understanding of where this all leads. The most important achievement is the realization that I’m no longer alone, and that I have a new outlet for frustration…