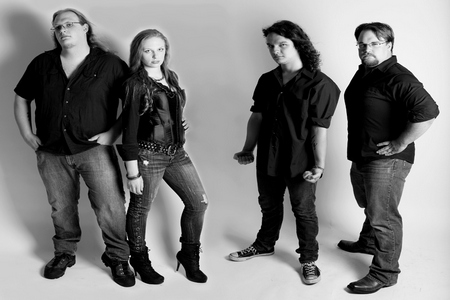 Anyone remember the days before the Internet, when you sought out new bands through the print medium, the radio, video exposure on MTV or cable specialty shows, or dare I say attending any live show in your preferred genres be it local, national, or international? In North America the heydays of the 1980’s gave way to a huge shake up in the 1990’s, when heavy metal shifted into death/black/extreme terrains and left a lot of the more melodic bands out to pasture.

Thanks to the annual ProgPower festival in Atlanta, GA, there’s been a resurrection of sorts for the melodic/power/progressive metal genre stateside, and obviously infusing many musicians with the creative juices to develop their own take on these genres. Hailing from Allentown, PA, MindMaze is one such band aiming their sights on capturing their own style, through a synthesis of influences encompassing decades of acts and favorites. Two albums into their career, they are making quite an impression not just on their burgeoning fan base, but also a lot of their contemporary idols within the power/progressive metal community, not an easy task considering the number of releases that hit the streets weekly.

Speaking to guitarist/keyboardist Jeff Teets one late afternoon on Skype, his thoroughness and genuine love for heavy metal rings through- and this was quite a fascinating conversation as a result. MindMaze has all the requisite tools in terms of performances, attention to detail, and intriguing songwriting to give North America hope for another power/progressive metal revolution.

Dead Rhetoric: How does a brother and sister who grew up with country music make the switch into traditional, power, and progressive metal? What factors led to those developing tastes?

Jeff Teets: Despite the factor that Sarah (vocalist) is actually almost 2 years older than me, I was the first one to kind of get into this music. It wasn’t like a direct, immediate shift from one style to the other; I was around 10 or 11 that I got into classic rock and rock music in general. After a year or so of that, I got turned onto Iron Maiden and a lot of the classic metal. That opened the door around 13 that I got into power metal, progressive metal came later. As I got into it Sarah got turned on to it- it was more of a gradual, stepping stone kind of process.

Dead Rhetoric: Tell us about the pre-cursor act to MindMaze, Necromance that developed with you and your sister Sarah, eventually gaining your current MindMaze drummer Kalin Schweizerhof towards the last year before the name change? What were the two demo recordings like, and how do you feel your sound and style evolved during those years?

Teets: To put it simply, Necromance was basically like a kid band in a way. We started when I was turning 14 and Sarah was turning 16, it was like the way most people’s first bands are like- you make a lot of mistakes. You learn as you go. The very first demo that we did from 2005 is unlistenable to me at this point. The recording quality is very bad, we did it on a digital 8 track recording device in a garage and edited it after the fact. The 2009 demo is a bit better; I’m willing to let people listen to it, it’s still very amateurish sounding. This was our first actual studio recording experience. We had some material that ended up becoming actual MindMaze songs on the Mask of Lies album.

What’s funny is our drummer Kalin, I don’t know if Metal-Archives has the information displayed correctly because I don’t really keep on top of that- he was the original drummer for Necromance, and I’ve known him since I was 13 years old. He was in and out of the band because when you are 15 years old, if your parents decide to move 45 minutes further away that jeopardizes your ability to be in a band. Stuff like that happened- but we’ve been in touch for 11 years. He’s on the 2009 demo, he’s really been there and an important part of the band. The trigger of the changing names things was… there is a band in our area called Sinister Realm that we are good friends with, and their bassist John Gaffney built that band up from the ground up and I watched what he was doing as far as taking the initiative to get the foot in the door on his own. I realized that was the only way we were going to start getting going, the industry has changed so much, and there isn’t really waiting for a big break anymore- you have to really fight your way up from the bottom. So we decided to record a professional quality album around the end of 2011, and when we made that decision we knew it was time to close that door to the whole Necromance thing, we were oblivious to the fact that in eighth grade the name could be misconstrued as a black or death metal band. That was the building base and now we are ready to legitimize things.

Dead Rhetoric: Is this when the struggle began to keep a steady bass player in the group – in comparison to the rotating drummer issues during Necromance?

Teets: It was funny- for as long as we’ve been doing this we’ve had that off and on struggle. There was a guy who played bass with us from 2006-2009 as Necromance (Chad Hontz), he was the longest running permanent bass player we’ve ever had. I can’t say enough good things about all three guys that have been involved with us as bassists since we’ve been called MindMaze- John from Sinister Realm who played on half of the Mask of Lies album and played live with us for a year or two leading up to that, or Rich Pasqualone who was with us for the rest of Mask of Lies, supporting that album and was with us when we were recording the new album to play out shows still today, or Mike LePond who recorded the new record with us. John’s thing was because of Sinister Realm, he couldn’t be in MindMaze full time. With Rich, he took the initiative to go back to college and he’s not quite as passionate about this style of music- the ability again to commit full time. Obviously with Mike he can’t commit full time because of Symphony X, they are all great people.

Dead Rhetoric: How do you feel about your debut album Mask of Lies at this point? What did you learn the most during that recording process, and is there anything you wish you could have improved upon?

Teets: I definitely would say that it was a learning process. One thing I will say about Mask of Lies in comparison to any prior recording that I’ve done in any form, it’s been about 2 years since we recorded that and I can still listen to this record and enjoy listening to it. It’s not like I am overcome with this sense of regret. I still stand behind it and I think it’s a good album. It was a big learning process, and we had a list of things when we went in to make Back from the Edge that we knew we wanted to improve upon. I try to take to heart some friends I have who I trust their constructive criticism. They will say what they like and what they may suggest could be different. Certain comments that keep coming up are worth taking into consideration.

Two things that we strived to improve with this album was the production of the new record, the sounds of every instrument, the mix as well. The performances are better too I believe, Sarah’s vocal performance is a huge step up from the first time around. The other big area of improvement is the songwriting. We got a lot of positive reviews about the songwriting for Mask of Lies – but the one comment I heard that resonated true with a lot of people I trust was something I thought that was true. I felt we could have done a better job of cutting maybe the excess fat out of some of the shorter songs. The longer songs I like and I think they justify their length, but there isn’t many short songs on that album. So this time in addition to keeping two long tracks we made a conscious effort to make a few more concise, in your face, to the point types of songs that have a little bit greater of an initial effect.