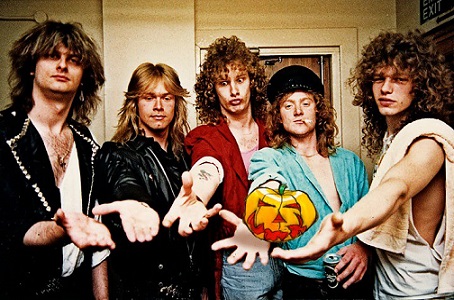 Dead Rhetoric: Not even for instance, Unisonic and Helloween are at a festival and you’re asked to do “I Want Out.” Nothing like that?

Kiske: I can do that with Unisonic. For the fans who are in love with the records of those times, like the Keeper records, I understand they have hopes and think it would be a cool thing. I don’t think they could give me the amount of money, just for business reasons to say yes. My heart is just not there. If they give me 2 million Euros, I’d be stupid not to do it, but I know they’d never do it. [laughs] This will never be an option. For the fans, you can do a lot, but for me, it would be very difficult to be on a stage and to sing among people who are not my friends, people who I have such a negative past with and feel so betrayed by. My voice would probably be gone.

Dead Rhetoric: But your meeting with Weike went well, though, right?

Kiske: Oh yeah, it went good. I don’t think it was…he was just trying to get me on his side. Trying to make me feel good and not about clearing anything up. I just think they’re up to something and probably in terms of their career it would be a nice move.

Dead Rhetoric: Their 30th anniversary is next year.

Kiske: The thing is, all those things aside, there’s another thing that I find weird when it comes to this. I have been connected with this name “Helloween” not completely for seven years, it was under seven years, and the Keeper records have been the most successful, but after that, they have a new singer and he’s been in the band for 20 years now. If you look at it, both of those bands – the Helloween of the Keeper era and the new one, they’re very different. They sound very different. Not only because of the singer, they sound different in many ways, and in my ears, I don’t have anything to do with it anymore, but that’s just me.

The people who come to their concerts nowadays, I’m pretty sure it’s because of the records they have done afterward, with their new singer, and they want to hear that guy, and I don’t give that to myself. I don’t want to be onstage singing material for people who want to hear Andi. When I’m on tour with Unisonic, they want to hear me, playing together with Kai, and doing “I Want Out” and “March of Time,” and it works.

Dead Rhetoric: Has Kai brought any of this up to you? The reunion talk?

Kiske: Kai is totally open for it. He said very clear – he would do it. He has had his difficult phases with Helloween, but he never got treated the way I did. For him, it would be way easier. I’m not bitter. It has to do with self-respect.

Dead Rhetoric: If you want to look at it from this side – going back to the decision for the band to be metal again in the mid-90s – were you in the right mindset to do more metal at that point?

Kiske: I wouldn’t have cared. Whatever they wanted to do, I would go for it. The thing is, that was one of the things, you are even influenced by their propaganda in that manner, because that was never even a discussion.

Kiske: That’s just the way they sold it to the people, especially Weikath who wanted to be The Beatles. He wanted us to sound like…whatever, but not like the old Helloween. It didn’t work out. I never thought that way; I don’t think that way. I just write a song and I like to fool around with the song with the band and see what they can do with it and if it turns out functioning, I’m happy. If Weikath can do an “Eagle Fly Free,” I love it. If he comes up with “Windmill,” I support that too! I just go in my Elvis mode.

I don’t care, I really don’t. In those years, if we had a meeting and they said “We want to do a Keeper III,” I’d say “Fine! If that’s what you want to do, where are the songs?” If the songs are good, yeah, if they’re bad, they suck. That’s how I deal with these things. These discussions were never there; don’t believe their crap. They believe it even themselves now, they have meditated themselves for so many years now that I’m 100% sure they believe it’s true.

I got into Helloween because I loved the music. The thing is, I was into metal when they approached me. It was Markus [Grosskopf, bass] and I was with my school band at the age of 17, and he gave me Walls of Jericho and he said their singer [Hansen], he sings for two shows and his voice is gone, and he wants to concentrate on guitar now and we want a singer like you. He gave me the record and I didn’t like it. I just didn’t like Walls of Jericho so I never called them up. Then, Weikath called me up a few weeks later, and what they wanted to do, was write material for me. They wanted to grow as a band, and that sounded really interesting. They already had songs written and I might be wrong: “Future World,” “March of Time.” A couple of those key songs of the first Keeper record and even the second one, they were already there. They wrote them for my voice, and I just loved them right away. I sang it, and to me, it’s always an emotional thing. I’m not a pragmatic person. I loved the music – and wherever the band wanted to go in those days and if they would have done it honestly and with passion, I would have never said anything.

Dead Rhetoric: So, if they presented all metal tracks, and you were presenting for lack of a better term, “experimental” tracks, would you worry about them not fitting in?

Kiske: No, I would say they’d especially fit in. They’d make it more colorful.