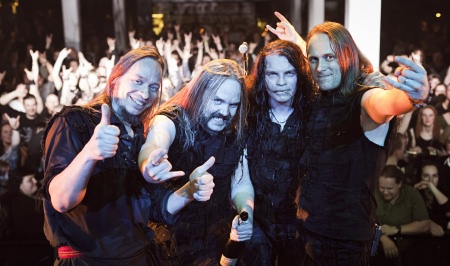 Estonia is not exactly a heavy metal mecca that you tend to think about much. However, Estonia’s Metsatöll have been bringing forth their version of folk metal for over 10 years at this point. Established in 1999, it was their 2004 debut, Hiiekoda, that put that squarely on the metal map. It’s been pretty consistent stream of quality since then, and the band’s newest album, Karjajuht, is no different.

Metsatöll are notable for their ability to keep the folk elements from their homeland and integrate them into their brand of heavy metal. It’s fun, yet you never lose sight of the fact that you are listening to a metal album, not a drunken bar anthem. Due to these reasons, it seemed some further investigation was in order. Lauri “Varulven” Ounapuu, guitarist and multi-folk instrumentalist, was happy to respond to DR’s requests. Read on to hear about Karjajuht, the band’s latest NSFW music video, and their upcoming state-side tour with Eluveitie and Tyr.

Dead Rhetoric: It’s been 10 years since your debut full length, Hiiekoda, was released. How do you feel the band has progressed since then?

Lauri Varulven: I personally would not call it progress, as progress is going forward somewhere. I think we are telling the same story with our music that we have told since Hiiekoda, but from different corners of our possibilities and perspective. Now we have a lot of more people in our crew. I see the band as not just our four musicians: a drummer, bassist, guitarist and a folk department. Also included in the band nowadays are technicians, producers, engineers, Spinefarm, Universal, and even you, who are now reading this interview. Thank you for being a part of Metsatöll!

Dead Rhetoric: Karjajuht was released recently, how has the response been to the album so far?

Varulven: To tell you the truth, I don’t read every review. I think the main thing as a musician is to play music you really like. At our concerts, where we have played our new songs, it’s good to see that all people like the new songs as well as the old. A good album is like a good book. You never get tired of reading it again and again. At our gigs we meet the same people again and again, even in the USA, where we have already played a countless number of shows. We do meet some of the same people every time and it gives us a very warm feeling. So the response from the public has been very, very good.

Dead Rhetoric: What is the meaning behind Karjajuht?

I think it has parallels in music – you have followers and everything. You are singing, it is considered as a truth. Even when your followers do not think, the textual concept changes them and with them it changes all around you. Are you willing to take and carry that kind of responsibility as a leader of the pack? If not, it would be wise to step back.

Dead Rhetoric: The video you made for “Kulmking” has everything you’d want to see in a metal video: heavy music, blood, and nudity. How’d you come up with the concept for the video?

Varulven: The video is a mythological narrative through our moviemakers’ eyes. We had our lighting-engineer Raiko, who took some of his friends and stepped forward to make the video. We told the crew our story about the creature: what it is and what we wanted. So the video crew swallowed all that information and came up with this heavy-metal masterpiece.

Külmking is a kind of creature in Estonian mythology, something like a “ghoul” – it has ten legs, ten arms, it’s yellow, smelly, has a horse-like body with long head, and is a hungry soul who cannot be killed. It can fly fast and it hunts everyone, especially kids in the forest where it eats and slaughters them brutally. In the night it comes and tramples on your chest and sucks all the living essence out of humans and animals. But it is afraid of the wolves, which can tear Külmking into pieces very easily and when Külmking is undone, it explodes. Usually all that is left is a little bad smell and rotting flesh.

Dead Rhetoric: On your website, you’ve taken the time to put the lyrics from all the songs into English. Do you think that there’s a certain purity to it in keeping the lyrics in your native tongue?

Varulven: I don’t think there is a pure language. One of the main attributes of a language that it changes all the time. Nowadays, Tallinns’ (which is the capital of Estonia) language is already mixed with English and Russian phrases. In south of Estonia, where I live, a much older Estonian language is spoken. Singing in Estonian for an Estonian is the most normal thing to do. Estonian is a very beautiful and very old language and of course, it our mother language. It is a very rich language. You can tell almost anything in Estonian, in all variations and microtones of the thinking-spectrum. For a wolf, we have at least couple of dozens of words, for a girl, at least hundred.

About translations – it’s a pity that there is no way to express everything Estonian directly in English, but I do hope that a English-speaker can have a little mouthful of our grilled ox here.

Dead Rhetoric: How do you make sure that you balance the heavy metal and traditional folk music parts of Metsatöll without leaning too far in one direction?

Varulven: There are three heavy instrumentalists and only one loud folk bard in our group.

Dead Rhetoric: With the growing number of bands in the folk genre, how does Metsatöll differ from the rest?

Varulven: I have not heard them all, but I think we are the only heavy band in the world with an Estonian bagpipe, torupill, in it.

Dead Rhetoric: You’ll be coming over to the US this fall with Eluveitie and Tyr. What are you looking forward to the most about this line-up?

Varulven: We have toured with Tyr before so we do already know what kind of humorous, merry circus on wheels we will have there. So everything will be as it should be in the prairies of the Wild Wild West.

Dead Rhetoric: What else is in the works for Metsatöll for the remainder of the year?